The defining period for smart lighting

The lighting industry is undergoing profound change and is experiencing an extended period of disruption and uncertainty.

In a world of commoditisation and falling prices, light fittings are no longer simply providing illumination. Instead, suppliers are now looking to offer a growing range of on-board capabilities, so that with the addition of intelligence, sensors, wireless connectivity, and colour tuning we now talk of lighting that is ‘IoT ready’ or ‘digital’.

“Lighting use to be about ‘on, off and output’, today it’s about Lumens doing more. We are heading towards a future in which smart lighting is more customisable and that provides the infrastructure to drive a lot of other services,” says Russ Sharer, Vice President of Global Marketing and Business Development at Fulham, a US manufacturer of energy-efficient lighting sub-systems and components.

Intelligence is moving into the luminaire and the interface is moving to standard devices that use a variety of platforms, such as Bluetooth. ‘Self-learning’ algorithms are being deployed and are likely to start to appear as standard on a number of lighting control platforms.

Connectivity is the key driver in the lighting market, which is expected to play a leading role in the roll out of the smart city and home.

This trend, coupled with the demand for sustainable, energy-efficient lives, means that more businesses and, to a lesser extent, consumers, are looking to find cost-effective ways to reduce their energy consumption by choosing smarter lighting solutions.

According to Mark Needham, Vice President of European Sales for Fulham, “While the promise of smart lighting has been with us for some time, the adoption of solid-state lighting has been the first significant step in this process.

“LED components have inherent intelligence and can be programmed for light intensity, hue, and dimming. This is all achievable while at the same time dramatically reducing energy consumption.

“The drive to control lighting started 10 years ago with the advent of dimmer switches. The development of LED drivers has provided a foundation for smart lighting, because they can also be remotely monitored and controlled,” says Sharer.

According to Needham, Fulham talks less about smart lighting and more about lighting that’s clever.

“There’s only been limited progress in the adoption of universal standards, when it comes to communications and control. As a result, a new segment of lighting has appeared – what we call clever LED lighting – which looks to leverage the digital power of LED drivers to build more intelligent luminaires.”

Thomas Kruse, a Product Manager with distributor, reichelt electronic, says that when it comes to smart technology – which he defines as an electronic system or device that’s connected to other devices or networks wirelessly – it enables a user to, “regulate heating more efficiently, add additional security measures to properties, and turn lighting into intelligent systems.

“Lights in individual rooms can be switched on and off automatically and colours and tones to suit a particular environment are now available.”

While smart technology is beginning to take off in homes, there has been a slower uptake among businesses. In the UK, many companies do not yet see the value of investing in this, highlighting how the technology is still misunderstood or not valued in the workplace.

“Recent research conducted for reichelt, found that over 50 per cent of UK businesses are not planning to invest in these types of systems over the next 12 months. Many of these businesses, who are yet to upgrade their systems, are missing out on the efficiency and cost saving benefits,” Kruse suggests. He continues, “Of the companies that do use smart technology, the most common use is for smart lighting, with as many as 74 per cent using it to save electricity, ultimately reducing costs in the long term. Controlling specific lights in the building means that only lights that need to be used are turned on.

“But beyond that, smart lighting can also improve employee safety and wellbeing.”

“Without communication all you’re able to provide is programmable lighting components with a number of unique features – which can only be set up when the lighting fittings are being put in place or while they are in the factory.”

The big ‘game changer’ for lighting has been the IoT, according to Needham.

“It promises to deliver much more intelligence and capability,” he enthuses, ”and has helped to turn the concept of smart lighting into a realistic proposition. Lighting is becoming a communications platform – making it so much more than ‘just’ a source of illumination.”

With smart light sensors, installers will be able to add intelligence via wireless or hard-wired connections delivering two-way communications.

Needham goes on to make the point that the IoT is helping to transform the lighting industry itself.

“A few years ago it was possible to list the ten or so companies supplying lighting to the general lighting market. One of those manufacturers would sell to a wholesaler, or an installer, who would then put a lighting scheme together – lighting was a simple commodity. That is no longer the case.

“Today, the market comprises of hundreds of thousands of businesses. Price and quality no longer set you apart from the competition. What sets you apart is being clever – so there’s a need for clever lighting, which will ultimately lead to smarter lighting and buildings.” 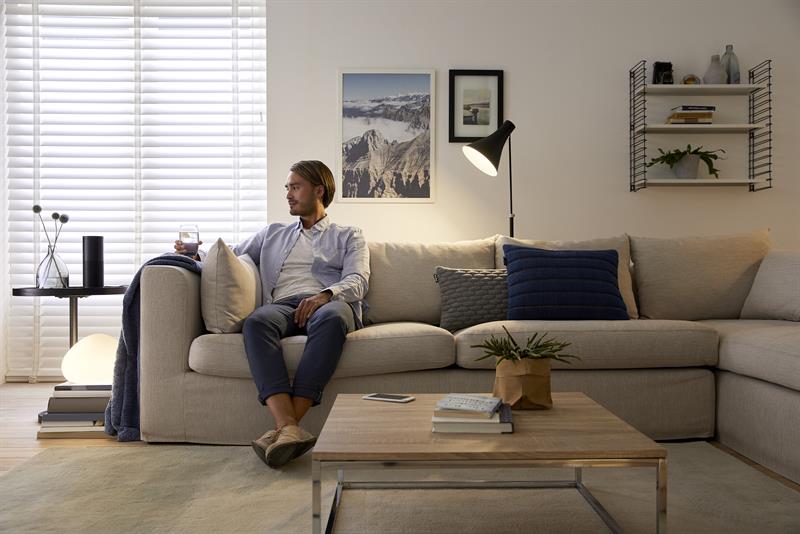 As a result, it’s increasingly unlikely that stand-alone lighting manufacturers will be able to survive, and that an industry in technological flux will also start to see a period of consolidation, with a growing number of acquisitions and mergers bringing a fragmented industry together.

But Needham believes, more importantly, that there will be a growing number of partnerships between lighting manufacturers and technology specialists.

But it remains early days, as a report from Strategies Unlimited found. Global shipments of connected lighting products made up just three percent of all LED shipments in 2016.

“While the market is certainly growing, I doubt that within the next five years we’ll see sales making up more than ten percent of the total market,” Sharer suggests.

“Nearly half of the lighting market in that time period will involve retrofitting, so it will be a lot easier to deploy wireless-based devices.”

According to the same report, at present, a full 80 percent of LED luminaire sales remain for “dumb” lighting.

“That doesn’t mean that manufacturers and installers shouldn’t consider emerging clever lighting components and what they can offer,” Needham warns.

“We are dealing with a very broad range of industrial customers and they are looking to get out of the traditional routes to market. They are looking at projects and at delivering solutions.

“It’s fair to say that most of our customers, upwards of 80 percent, are making this difficult transition, and are approaching the market very differently.

“They’re not just looking at selling ‘light’, but looking at what they can add, or do differently, to differentiate their offering. That, in turn, requires a deeper, long term relationship with their customers.”

The development of clever lighting enables installers to create solutions that can be tailored for specific installations or retrofits, whether in retail, hospitality or in other commercially premises.

Needham makes the point that while luminaires can be adjusted for colour temperature, different manufacturers will produce LEDs with different hues.

“In the current market that makes it easier to compete on features and value rather than on price,” he suggests.

Sensors can be placed anywhere there is a light fixture, and those sensors can provide information for applications including: HVAC, motion detection to prevent intruders, smoke detection, triggering an alarm, activating automatic door locks, providing emergency lighting, and monitoring air quality.

But this can be extended well beyond one building to include entire neighbourhoods and cities. Sensors can be mounted in streetlights to monitor traffic and control traffic lights, weather conditions, and light specific areas on demand, as well as manage energy consumption.

It should also be possible to be able to programme these sensors to do different things and to adapt to address a variety of end uses.

The data that’s collected can then be sent to the Cloud and processed there.

Today, the Internet has become the communication platform for almost everything, including machine-to-machine communications. Lighting is seen as providing the perfect framework for IoT-enabled infrastructure. But that then raises the issue of interoperability.

“That remains one of the biggest issues that we have to contend with, and has rather held back the adoption and spread of smart lighting,” suggests Needham.

Among the standards addressing the lighting market are: DALI, the Digital Addressable Lighting Interface, which has been the preferred standard for digital lighting controls including LEDs; ZigBee, a wireless standard that provides control over devices, such as lighting; and TALQ, which was designed for outdoor lighting systems.

“Because of these various standards, businesses have been faced with making a decision as to which connected solutions they should go with,” explains Needham. “It ties people into a long term commitment.

“While in the lighting industry it was always possible to buy a LED or driver from anywhere, in terms of connectivity and controls that has been more problematic.

“Bluetooth Mesh, which was adopted as a networking standard in 2017 as an extension of the Bluetooth Low Energy (BLE) radio standard, provides many-to-many networking for large-scale device networks, such as asset tracking, wireless sensor networks, and building automation.”

As IoT networks require hundreds or thousands of devices to communicate using small packets of device data, Bluetooth Mesh is seen as offering a number of key advantages over other protocols.

“It has been tested and proven to work; is reliable and scalable, with well-defined open standards that will make it easier to develop products that interoperate. And while Bluetooth Mesh is still relatively new, it has been around long enough to have been embraced by most vendors seeking a wireless solution,” contends Needham.

“The key differentiator is that it is an open standard and easy to configure. Most smartphones come with Bluetooth, making it only a free App away from controlling lighting.”

Needham doesn’t think it will make other protocols redundant. Standards such as DALI, Zigbee, and ZWave still dominate lighting controls and are certainly contenders as smart lighting platforms.

“But over time, who knows?”

While the promise of smart lighting is set to become a reality, clever lighting solutions are providing solutions in the real-world.

Technology and the IoT are forcing change and to be competitive and successful, manufacturers understand that they now have to offer LED luminaires that are equipped with IoT-ready sensors and that are simple to install and maintain.

But they also have to contend with a commercial lighting market that has a well-developed supply and deployment strategy, and with plenty of “dumb” luminaires deployed, or still being manufactured, the installation of smarter luminaires capable of supporting the IoT is likely to take many years.

Laying the foundations for the future

How ‘smart’ is the smart factory?