Automated road traffic management systems, surveillance systems and storage for the vast amount of data being generated will make up a core part of the future smart city infrastructure. Much of this information is sensitive so the storage technology used needs to be the best available.

Understanding how storage works and how end users can access it is now the focus for storage companies as they look to facilitate the adoption of cloud-based data centres.

As smart cities grow, video surveillance is set to become a key target for storage companies over the next few years and as the cost of network video surveillance cameras drops below $100 so the cost of implementation will fall. As a result, the most difficult task for storage companies is ensuring the cost of storage or cost per gigabyte falls in-line with this while maintaining high standards of performance, compliance and security over those data management and storage systems.

There is an accelerated demand for security cameras in cities around the world and, according to a recent IHS report, the global market for video surveillance will grow by 7% in 2016 with some 66 million network cameras shipped globally, of which 28 million will have high definition capabilities. This proliferation of security cameras is set to see one camera deployed for every 14 people in London and body-worn cameras being used in Beijing as part of its Metro project. Overall, the video surveillance industry is set to grow at a Compound Annual Growth Rate (CAGR) of 10% to $24.2 billion by 2019.

This increasing demand subsequently means the need for RAW capacity is going to increase (RAW is a file format, much the same as a JPEG). Surveys suggests that the total RAW capacity of enterprise storage use for video surveillance is set to increase by 48 per cent this year, and while this demand doesn’t just affect the cost per gigabyte and required performance of storage, flexibility is also a necessity for data centre providers. They need to service an oscillating consumer audience demanding open API access for seamless integration into a plethora of technology systems and integrated services – and provide end-to-end security too.

This demand for open API access also comes with an expectation of performance quality and a high IOPS desirability. Demands which mean that it is essential that storage operates with Edge-Core architecture, typically used in flash, which uses an Edge filer or Edge filer clusters to provide low-latency data writes and reads - rather than using traditional NAS architecture which has much greater latency and requires data to be transferred through a network to a filer and then to repositories and back again.

Understanding the converging requirements for Hardware and Software integration behind video storage is crucial for companies in this space. Diversity of end point devices with cloud providers having to cater for a wide range of applications means a comprehensive understanding of front-end processes and capability needs.

Video surveillance storage hardware is split into two segments. One: Hardware Network Video Recorders (NVRs) with preconfigured Video management software (VMS) and storage – and two: Enterprise Storage (storage with no VMS). VMS is software that runs on IT hardware with the functionality to manage and record digital video streams directly from an IP-network on to storage devices.

While traditionally storage organisations would have focussed solely on the storage of video, evolving infrastructure requirements mean they have to take front end hardware and cloud applications into consideration when designing storage for video segments.

City surveillance, airports and government dominate enterprise video surveillance storage spending globally, with over 50 per cent of the market accounted for by these purchasers, and end point applications can vary from body-worn cameras to citywide surveillance. Due to the nature of surveillance storage, manufacturers need to focus on keeping the Total Cost of Ownership (TCO) as low as possible due to the exponential growth of data captured and key requirements for storing data over extended periods of time. It is critical storage providers pay attention to the architecture, capacity and overall deployment of the storage systems, particularly in cloud storage, facilitating scalable models with robust systems that provide clients with longevity of use and performance throughout the product lifecycle.

Creators of cloud-based storage must also begin to build storage with space limitation in mind. Video surveillance footage needs to be stored for much longer periods of time than traditional data and the high memory requirements mean that physical storage space must be a consideration for manufacturers designing storage for data centres. Reducing rack space reduces TCO of enterprise storage bringing down operational costs for data centre owners. 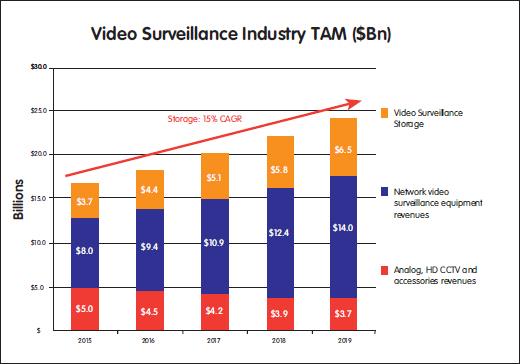 The security of video surveillance storage in the cloud is also a key concern from customers through to data centre vendors. The sensitive nature of data stored by video surveillance operators means that organisations involved in the entire software chain are hyper-aware of the repercussions of leaks and hacks.

While these technological advances can provide greater opportunity to safeguard individuals, in general, any increase in the capability of surveillance camera system technology also has the potential to increase the likelihood of intrusion into an individual’s privacy.

The Data Privacy Act, 1998, outlines a number of provisions that operators must comply with and which more broadly covers protocol and code of conduct for surveillance operators and the safeguarding of data.

Integrity: While encryption and security of data is important, the integrity of that data is also crucial. Data corruption can cause serious problems for operators and means information has the potential to be inaccessible, or worse, inaccurate.

For Video Surveillance software however, it is largely sectors in specific markets that ultimately drive the needs for security and compliance. Video Surveillance used in conjunction with Automatic Number Plate Recognition (ANPR) for example will need to take into account the compliance issues for payment systems, in addition to standard data privacy regulations. Where body-worn-video (BWV) is concerned, GPS tracking regulations will need to be adhered to. As a result of this industry compartmentalisation, it is important that storage providers first form partnerships and working groups in order to fully assess and iterate through any issues they may encounter or laws they may have to comply with. By doing this, they can ensure quality of service and performance in line with product longevity.

As technology pushes to the edge of the envelope, the need for cloud data storage for enterprise is increasing exponentially, and as this happens, data centres need more space and more complex management systems to ensure their business continues to grow.

Enterprise systems mean reduced rackspace and lower power usage for data centres where often the cost of survival can be in vast overheads and operating costs. By increasing CAPEX spending and reducing OPEX spend when investing in these systems, it means that a much lower TCO than traditional systems can be attained because the cost can be depreciated over a specific period of time.

As data storage-consuming devices become more prevalent in modern society it is vital storage providers stay ahead of the curve and plan for the future of enterprise data storage.

Beyond the laboratory: the ‘Smart City’ playground