In modern communications systems, the more bandwidth that is available, the more information that can be transmitted. As bandwidth requirements increase, the need for faster and higher linearity A/D converters and amplifiers also increases.

With increased bandwidth, more noise is introduced into the system which can overpower low level signals of interest. This means the requirement grows for low noise A/D converters and amplifiers. Increased bandwidth also means system linearity becomes more important, especially in the presence of a strong interferer which can block other signals of interest. One approach to resolve these issues is to use a high speed, high resolution A/D converter driven by an equally fast amplifier. Better sensitivity and selectivity will improve the quality of the system.

There are several design trade offs in any communications system. Bandwidth, spurious free dynamic range (SFDR) and sensitivity are all important factors, but are difficult to achieve with one solution. Usable system bandwidth is dependent on the A/D converter's sample rate and system bandwidth cannot be greater than half the converter's sample rate. More bandwidth means faster sampling, which limits the range of practical converter options.

High speed A/D converters are typically lacking in terms of SFDR and signal to noise ratio (SNR), limiting the performance of the receiver. However, the LTC2107 16bit A/D converter sets a new level of performance and linearity. With a sample rate of 210Msample/s, the usable data bandwidth is nearly 105MHz and, with an SNR of 79dB, low level signals can be detected. The LTC2107, coupled with a high linearity amplifier like the LTC6409, improves the throughput of modern communications systems while simplifying the front end design.

A major challenge in high speed communications is maintaining good SNR and wide bandwidth. One approach is to use slower sample rates and higher order filters to attenuate the out of band noise before sampling the analogue input signal. This requires a complex filter network with several stages of attenuation and a significant number of components. High order filters also tend to ring in response to the sampling glitches of the high speed converter. This problem can be solved by using a converter with a faster sample rate, which simplifies analogue filter design.

Using a low order filter allows the sampling glitches to settle properly and improves the linearity of the system. A high speed converter, such as the LTC2107, has enough bandwidth for any demanding communications system. With a wider bandwidth, the anti aliasing filter used to reject out of band signals becomes easier to design. With more bandwidth as a guardband, a lower order filter can be used, simplifying design and reducing component count.

Wider bandwidth also allows more noise to be sampled by the converter, increasing the need for a device with a high SNR. Along with an SNR of 79dB, the LTC2107 has improved SNR and SFDR figures, allowing the receiver to accept lower level signals that could be buried in the noise floor of other parts. This adds range to the receiver and allows signal transmission over longer distances.

High performance A/D converters require a high performance environment in which to operate. With any direct sampling converter, nonlinear charge is produced in the sampling process. This is reflected into the input network each time the sampling switches close. A highly absorptive network is required at the analogue input to ensure that no charge is reflected back into the input network, where it could potentially be resampled. The input network of the ADC should be as close to 50? as possible to allow for maximum absorption of this nonlinear charge. If this charge is reflected in a less than ideal reflective network, it can be resampled by the converter, resulting in simple or intermodulation distortion.

Asymmetrical layout
Another potential source of distortion is an asymmetrical layout of the input network. Nearly all high speed A/D converters are differential by design. With an ideal layout, this allows good common mode rejection and second order harmonic distortion. Any deviation from perfect symmetry will cause a mismatch in the differential signals, manifesting itself as second order harmonic distortion. Even a simple design decision to flood copper closer on one side of the differential pair than the other can cause a difference in ground current in the adjacent ground planes, adding distortion. Absolute symmetry is required for maximum performance. Figure 1 shows an example of good layout of a high speed A/D converter. This symmetry should extend several centimetres beyond the converter or to the nearest amplifier or balun transformer. 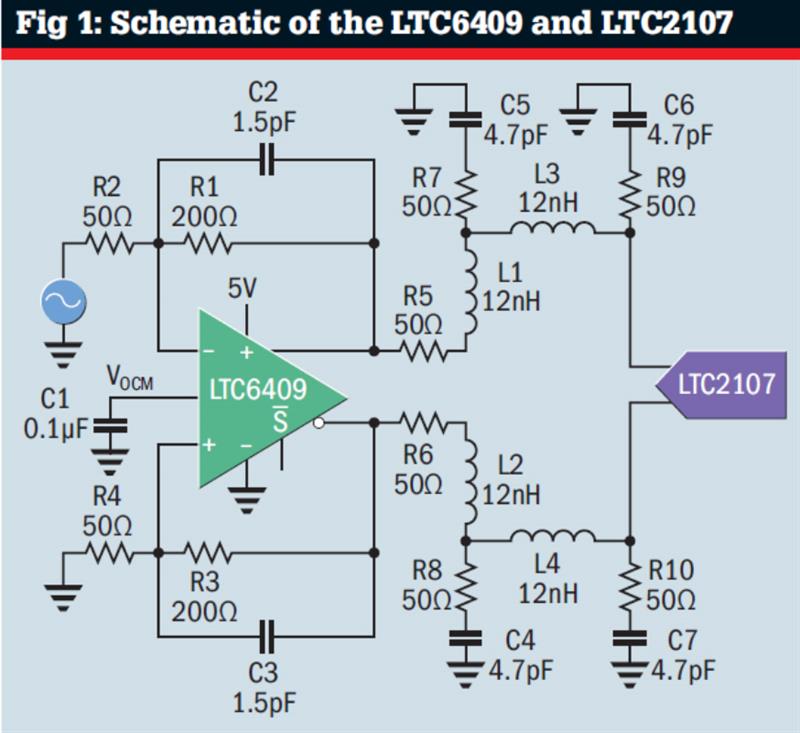 To minimise the effects of direct sampling on the source of the analogue signal, an amplifier can be used to absorb the charge from the sampling process. Since many feedback amplifiers have low output impedance, the nonlinear charge is attenuated before returning to the converter. If the amplifier is located as close as possible to the converter, these reflections can be reflected a number of times before the sampling period ends, reducing the impact of glitches on the converter's SFDR. To take advantage of the available bandwidth, an amplifier with a large gain bandwidth product is required. With 10GHz gain bandwidth, the LTC6409 is a suitable choice; it has distortion products better than 90dB out to 100MHz and an input noise density of 1.1nV/vHz. When used with the LTC2107, the LTC6409 provides low noise and distortion while maintaining a wide bandwidth. Interface between the two can be minimal, further simplifying system design.

Being a feedback amplifier, the LTC6409's gain can be changed by changing the feedback value. With the amplifier's low noise density, high levels of gain can be achieved whilst maintaining a good SNR at the converter. The amp's increased gain and high linearity ensure low level signals can be detected. These features allow the LTC6409 to drive an A/D converter with very little filtering. Most filtering should be placed in front of the LTC6409 to limit the frequency content at its input and to allow for more traditional filter topologies that would not work well between the parts. The LTC6409 also does a single ended to differential translation of the input signal, which allows for filters at the input to be single ended.

In a communications system, there will be rogue offenders and blockers that can appear in band at any time. If the amplifier or converter has poor linearity, these unwanted and unanticipated tones can produce distortion products which are much higher than the signal of interest, causing the receiver to lose that signal. The more linear the system, the less likely the interferer will cause a loss of reception.

The LTC2107 and LTC6409 combination solves many problems in modern communications systems. The high sampling rate of the LTC2107 and high gain-bandwidth product of the LTC6409 allow signal bandwidths up to 100MHz with no degradation in linearity. Ultimately, this improves the sensitivity of the receiver and the ability of the receiver to receive more data and improve throughput. The performance of these devices simplifies the system complexity by reducing the need for complicated filters and signal processing.