“In 2035, quantum processors with a few thousand qubits will run the first small applications.”

Cloud computing and big data analysis will require the development of ever more powerful computing systems, according to Iuliana Radu, program director for beyond CMOS and quantum computing at imec.

If you consider mobile phones, they seem perfectly capable of running any app or mobile game, and of streaming video. Likewise, today’s laptops are able to support us at work or at home.

So, will we need ever more powerful computer chips in 10-20 years from now? And, if we do, what could these high-performance computers look like in 2035?

According to Radu the answer has to be a resounding ‘yes’, as the need for high-performance computing will continue to increase.

“By 2035, we will still be producing massive amounts of data, without deleting any of it. Think of pictures and videos posted on social media – in whatever form – and the huge amount of data processed by companies such as Google, Facebook, and Amazon.

“Wearables and ingestible devices will continuously be monitoring our health and will combine that data with our genetic imprint.

“Add to this the large amount of data generated by emerging IoT applications such as autonomous cars, smart buildings and smart cities, and the demand for high performance computing can only continue to increase.

“Most of this data will be processed and stored in the cloud. And this can only be sustained through increasingly more performant computing and memory solutions.”

“Applications such as drugs and materials discovery, weather forecasting, or nuclear simulations will continue to demand increasingly powerful computers to handle their ever-expanding sets of data. Today, these applications run on supercomputers, in which hundreds of thousands of classical processors work in parallel to solve different parts of a single large problem. A significant drawback of these supercomputers is the gigantic power consumption: for a typical supercomputer, the power consumption can reach 15-20 megawatts.”

According to Radu, both cloud computing and supercomputing will need solutions that bring computing to a higher level of performance, and this at the lowest possible energy consumption.

“As it is increasingly more difficult to reduce price per transistor with simple area scaling, new technology drivers are becoming more prominent. The ability to deliver a certain logic (or memory) function for the lowest amount of power is increasing in importance. So, the need for increased performance and reduced power consumption are becoming the main drivers for innovation.” 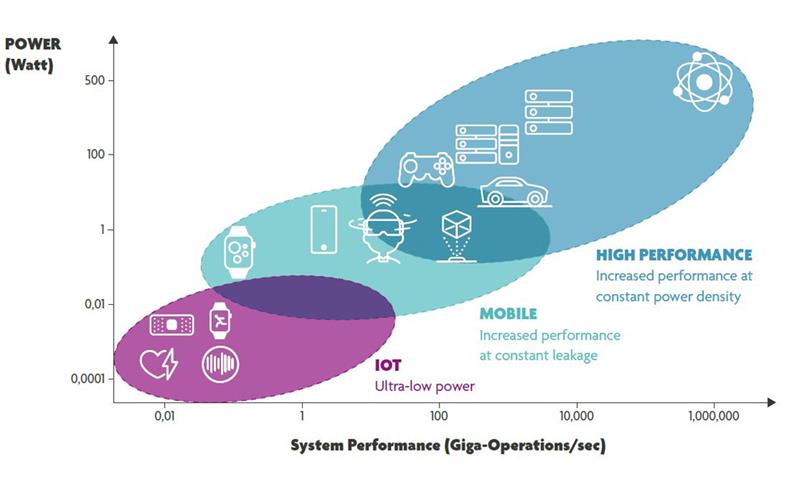 In the future, classical device scaling will no longer be the only instrument towards higher performance. There is a clear trend towards increased device diversification and circuit customisation.

“In the past, one and the same transistor architecture was used to enable all functionalities on a chip. Today, five to seven transistor options co-exist in the same technology node. Each of the options has different performance specifications, e.g. with specific threshold and performance levels. This enables different applications ranging from ultralow-power in the IoT space, to mobile and high-performance computing.

“In the high-performance realm, we expect chip-level diversification and an increased use of multiple small chips in 2.5D and 3D packaging. As such, more targeted CPUs will be available, leading to the development of even more custom-made chips.

“I expect we will even see different devices either integrated on the same chip or on multiple chips working together, enabled by system technology co-optimisation.”

“Our expectation is that in the 2035 timeframe, technology nodes could include not only Si based transistors, but also other materials and possible ‘beyond-CMOS’ devices that are co-integrated with the classical CMOS-based solutions. The alternative devices could be used along CMOS for specific functions.”

imec is developing majority gates based on spintronics devices. These devices promise a decrease of power consumption by up to two orders of magnitudes but only for specific logic functions.

“We are also developing devices that have 2D materials in their conduction channel, which could be implemented towards extreme device scaling or used as transistors in the back-end.”

On the eve of quantum computing

Some applications are too complex to be solved with classical computing paradigms and here, quantum computing can come to the rescue.

“In a quantum computer, information is manipulated in a fundamentally different way than in a classical computer. Traditional computers operate with bits – that can be either zero or one – and operations on these bits are performed sequentially. Quantum computers operate with qubits that can with a certain probability be zero and with a certain probability be one. Add to this, entanglement, which means that qubits talk with each other and act concertedly, and the number of states in a quantum registry increases like a power law with the number of qubits.

“Operations can be performed on all these states simultaneously, resulting in immense parallelisation capability. Quantum computing promises the ability to solve those big problems, too difficult to solve on a classical computer. However, while quantum computing can go beyond the capabilities of classical computing, it will not be the ‘holy grail’ for solving all issues. It will only be useful for certain applications, for example, for solving problems that have many variables as their input.”

An example of a possible application for quantum computing is materials research. For example, the search for superconducting materials that can replace copper (Cu) in the rotors of windmills. Today’s windmills contain tons of Cu as the winding of the coils in their engines. This significantly contributes to the weight of the windmill head, limiting the size increase in the wing span of the windmills. Therefore, in Europe, supercomputing time is increasingly being used to find new superconducting materials.

“This search could be significantly advanced if a quantum processor could be used as a building block for the supercomputing systems. Besides materials discovery, there are many other useful applications, including weather and climate modelling, space exploration, fundamental science, the modelling of economical or societal phenomena (where complex differential equations need to be solved), machine learning, and the development of personalised medicine. By 2035, I believe we will see processors with a few thousand qubits, allowing us to run some algorithms and some small applications. In that timeframe, we will see materials discovery being done on a quantum computer.

“Ultimately, we will need to embed the growing power of quantum processing into existing computing paradigms to enable the required ‘quantum leap’ in performance.”

Imec is contributing to this future vision with the development of next-generations logic and memory technologies. One option is to push Moore’s Law to the extreme by scaling down logic devices to the 5nm technology node. More specifically, in 2018, breakthroughs were realised in several enabling technologies for scaling, including EUV lithography and sequential 3D integration. With sequential 3D technology, imec was also able to stack FinFETs with 45nm fin pitch.

imec is also looking at ‘beyond CMOS’ devices and is exploring new concepts such as spintronics majority gates. Along with this, imec is developing hardware platforms to enable compute-in-memory and quantum computing. Visit imec’s website to find out more.

One step closer to quantum computing