Sensor design is often described as straightforward and better performance can usually be achieved in terms of power, measurement time or sensor size.

One problem when using efficient LED technology is a more power-hungry sensor. To understand this, we have to dig into the fundamental physics associated with sensor design.

Non Dispersive Infra-Red (NDIR) gas sensing is used extensively when it comes to gas sensing and is robust, reliable, and cost-effective. It also provides maintenance free operation and is seen as an obvious choice for industrial as well as consumer applications.

NDIR gas sensing belongs to a family of sensing techniques where energy is first converted into a physical signal, the signal is then affected by the target of the sensor and that signal is then located by a detector.

Above: With NDIR gas sensing, the infra-red light is passed through the gas volume and sensed by a narrow-band detector that is tuned to match the absorption wavelength of the gas

In this case, energy is turned into light, the light is then absorbed by the target gas in proportion to the concentration of gas and, finally, a light detector measures the remaining amount of light.

The method involves a number of engineering issues such as providing a stable optical path with a length that is adapted to the measuring range according to the Beer-lambert law, where a longer path tends to give higher resolution but at the cost of earlier saturation.

Also, the interference filter that selects the wavelength range for the detector must be selected with care to maximise sensitivity to the target gas. It must be able to suppress cross sensitivity to other gases, reduce sensitivity to production tolerances, as well as minimise temperature and ageing drift.

The electrical driving and readout system must also be carefully designed in order to utilise the AD converter capacity.

Normally, the light source is switched with an on-time of about 100ms, in order to compensate for thermal drift and interference from ambient light and electrical signals. Correlated double sampling is normally used where

The time period of 100ms is selected since it can perfectly suppress 50Hz and 60Hz disturbance, and it is compatible with the relatively slow time constants of incandescent lamps and thermal IR detectors such as thermopiles and pyroelectric detectors.

This family of sensors, that convert energy into a signal, is affected by the target when it’s detected and there are some non-intuitive properties when it comes to low-power optimisation.

When power is saved the signal-to-noise ratio SNR will ultimately cause problems and determine the detection limit and how far it is possible to go. SNR is the property that is turned into resolution and in general terms the detection limit can be expressed as:

The sensitivity is determined by the spectroscopy and is normally not possible to adjust in order to save power, without sacrificing the measurement range. The efficiency of the light source is noted as 𝜂𝑠𝑜𝑢𝑟𝑐𝑒 and the total optical efficiency, including collimators and reflection losses, is noted as 𝜂𝑜𝑝𝑡𝑖𝑐𝑎𝑙.

The duty cycle is the first parameter you adjust when optimising for low power. Since it scales as the square root it is a powerful tool for reducing power without losing too much resolution.

Another way to save power would be to reduce the input power to the light source during on-time. However, the SNR scales linearly with the power reduction, which is less favourable than saving the same power by a duty cycle reduction.

From a system point of view, it is most power efficient to maximise the input power and reduce the duty cycle.

Assume that you can push 10 times more power into the light source and get 10 times more light out. That increased peak power will allow you to reduce the duty cycle 100 times and reduce the total power consumption 10 times with maintained resolution.

Light source efficiency is not the only parameter that determines the system’s power consumption. The peak power of the light source is

equally important. Until recently, this was the weak spot when high efficiency LEDs were used in NDIR sensors. The low power of LEDs results in ether bad resolution or increased power consumption.

This has essentially been a Catch 22, where low power LED technology cannot be used since the total overall power will increase. In order to manage the transition you need to look at Equation 1.

A low power source can only be compensated by reduced detector noise and/or improved optical efficiency. 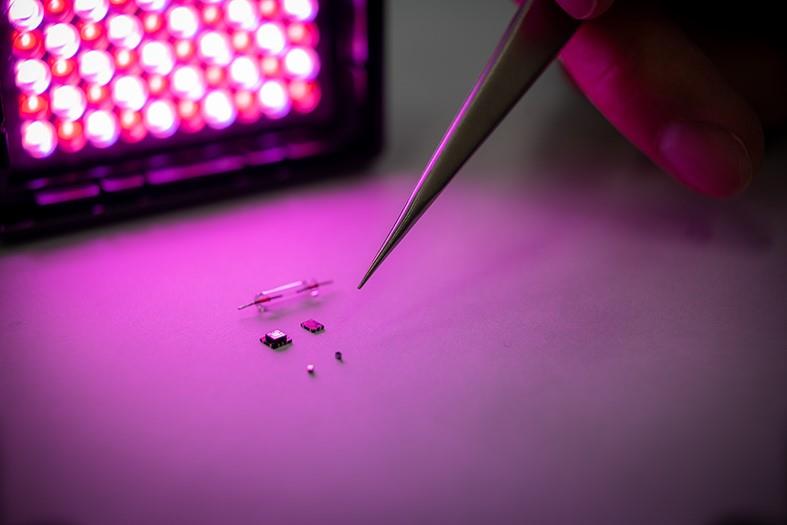 Above: A comparison of NDIR sensors in the last 30 years, from a traditional lamp to the latest micro devices

This was the breakthrough that led to the first low power NDIR CO2-sensor with performance comparable to traditional sensors.

The Senseair LP8 uses 0.7mW and while it has an incandescent lamp it takes advantage of a high-resolution photo detector. The drawback here is obvious - at these low duty-cycles - the slow response of the filament.

The duty-cycle cannot be handled by reducing the on-time and with long off-times you will end up getting long intervals between each sample, and so there is a risk of missing events and adding a time lag to observations.

Another weak spot with lamps is poorly defined geometry, where the radiating filament is spread out in a space over several millimetres and positioned with tolerances of about ±0.5 mm.

Using miniaturised optics, it is not possible to collect and collimate the light from the lamp with high efficiency. An LED, on the other hand, has a small but well defined emitting area that can be positioned with accuracy better than 0.1mm.

The Senseair Sunrise has been developed for the accurate positioning of the LED, resulting in an optical efficiency of 30%. This can be compared to the 3% efficiency of a classical NDIR sensor such as the Senseair S8 or LP8.

The Sunrise uses 0.5mW power on average, in spite of the relatively weak light source, thanks to the improved optical efficiency.

By improving the detector SNR and optical efficiency there is room for an 80 times reduction of light power with maintained resolution - sufficient to allow for a transition to LED technology.

Since both detectors and emitters are based on solid state technology there is no practical speed limitation, meaning that you can get valid readings as often as you want with a maintained low duty cycle.

It is not obvious that high efficiency components will result in low total power consumption. For some sensors, like older NDIR gas sensors, a more efficient light source with low output power will often result in higher power consumption of the total system.

These challenges can be overcome, however, by improving the signal to noise ratio of other parts of the system such as the infra-red detector and the optical design.