There has been a long-standing interest in accurate indoor positioning technology, with a wide range of interesting use cases involving the tracking of either people or objects.

These include locating assets in a warehouse or other facility, finding people or for sports related data-analysis.

However, the will has not always been matched by the means. The technology has been either too inaccurate to serve the intended purpose or too complex and proprietary to easily put in place. We assume GPS is not feasible or accurate enough.

First, let’s look at the terminology. It is common in positioning systems to use the term “Tag” to refer to the mobile device that is being tracked and “Anchor” to the fixed points used to form a reference point or grid within which the Tag can be tracked.

The simplest indoor tracking method uses Bluetooth Beacons, a cheap and widely used technology. These work off simple received signal strength (RSSI) indicators, with position determined by the signal strength measured at one or more anchors.

Nearly everyone carries a Bluetooth device, namely their mobile phone. For objects, a dedicated tag can be easily and relatively cheaply created. Bluetooth has a simple standardised mechanism (“advertising”) whereby a device can send out a short message to detect location without complex interaction with the rest of the system.

The major drawback of such a system is lack of accuracy. The signal strength (or RSSI) is hugely influenced by obstacles between the two points, the relative orientation of the transmitting and receiving antennas and other factors.

In looking at the potential accuracy of locating a Tag worn by a person using Bluetooth RSSI, it’s necessary to consider the effect the human body could have. If we imagine the Tag as a badge pinned to a lapel, the emitted advertising pulse traverses the body in one direction but is freely transmitted through air in the other. Thus, if we consider a person with such a Tag equidistant between two Anchors, the measurements at each anchor will be very different.

Direct transmission through the body might involve an antennation of up to -50db. There would probably be transmission round the body or reflection. However, 10 – 20db attenuation could be realistic, meaning the two equidistant anchors would infer distances different of up to an order of magnitude.

Even the direct measurement can only be assumed to be within a +/- 3 dB window resulting in an error in the distance estimation of a factor of 2 i.e. “somewhere between x m and 2 times x m”.

New capabilities
To improve accuracy, the Bluetooth Special Interest Group (SIG), has introduced new capabilities with Bluetooth 5.1 including the detection of the angle of arrival of a Bluetooth packet.

This works by having a multiple antenna array in the Anchor and measuring the phase difference of the same signal received at the different antennas, typically separated by a half wavelength i.e. c. 6cm.

The diagram below shows a signal arriving at an angle to the antenna array, assumed to be sufficiently far away that the paths to the different antenna elements can be parallel lines. Therefore, at right angles to the direction of travel, the signal is in phase.

The accuracy of the angle of arrival estimate is related to 2 fundamental parameters:
• The total width of the antenna array, typically (N-1) *λ/2 where N is the number of linearly spaced antennas
• The accuracy with which the phase of the received signal can be measured for each antenna

The accuracy with which the phase can be measured depends on the precision of the IQ sampling carried out by the BLE device, which is affected by the internal precision of the IQ demodulator and the short term frequency drift of the crystal oscillators used in both the tag and the anchor.

In this article, we have assumed that the BLE device can resolve the electrical phase between bursts coming from different antennas with a tolerance of +/- 10° due to the combination of the different error inducing factors.

Geometric calculations indicate that for a 2 antenna array this results in an angular positioning error of +/- 3° close to the axis normal to the antenna plane and +/-5° at 45° relative to the axis.

Similar calculations show that for a 4 antenna array the accuracy of the angle estimation is improved respectively to +/-1° close to the axis and +/-1.5° at 45°.

Assuming a more realistic angle accuracy of +/- 5 degrees, then the accuracy of location is dependent on the distance * tan (5 degrees). So, at 25m distance, one would have an error of 0.087*25 = +/- 2m. Thus, with multiple anchors, one could expect to localise an object to within a “zone” of 1-2 meters, depending on the distance from the anchor. 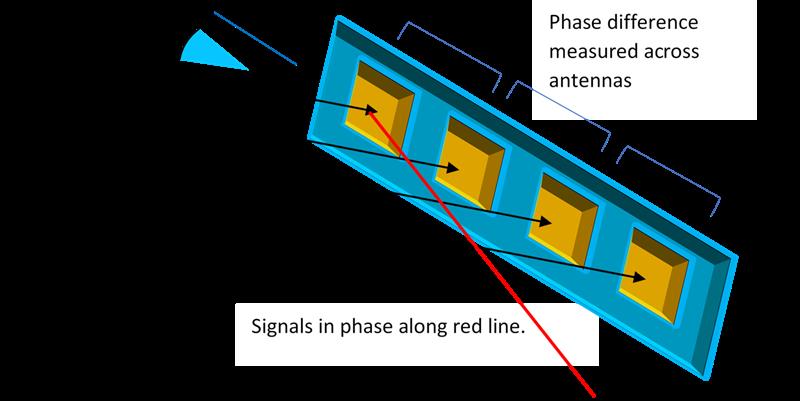 Above: A signal arrives at an angle to the antenna array

The other main method of indoor positioning is Ultra-Wide Band (UWB). This method uses a short sharp pulse in the 5-8 GHz range and detects the time of flight between two points, somewhat analogous to an “indoor GPS”. In terms of accuracy, such a system is limited by the timing accuracy of the arrival of a pulse. Using the speed of light at 3 x 10**8 m/s, one can calculate that to achieve 1cm accuracy, a timing accuracy of 33ps is required.

Using only the detected amplitude of the received pulse implies that the accuracy is approximately equivalent to half the pulse width. Since pulse width is directly related to the inverse of bandwidth and UWB systems typically use a 500MHz bandwidth, this technique could achieve an accuracy of the order of 0.5/500MHz =1ns or 30cm. However, UWB systems use very high frequency sampling of the incoming pulse train and correlation to a known reference train to improve accuracy. Assuming the high frequency sampling captures the phase of the pulse to within +/-45°, the accuracy would be related to ¼ of the carrier frequency period. In the case of 6.5 GHz UWB this implies an accuracy of 0.25/6.5 GHz or 38ps, equivalent to 1cm positioning precision.

In real case examples the basic repeatability of the receiver is of the order of 130ps (4cm) and additional antenna environmental issues allow for an average achieved accuracy of around 10cm.The disadvantage of such a method is that until now it has been based on closed proprietary technologies, and complex and expensive systems. Real installations require a system to synchronise and keep synchronised the Anchors at high precision. Such systems are not trivial to install.

However, there have been interesting developments in the Ultra-Wide Band ecosystem. The first is that Apple mysteriously announced that the recent iPhone 11 will have a “U1” chip in it with UWB capability. There are almost no details available, but if this was to presage the development of a de-facto standard and a movement to make UWB ubiquitous in the mobile phone, it would be a game changer for the technology. Also notable is NXP becoming the first large silicon player to announce a UWB chip.

There are also intriguing possibilities if, as seems likely with the next generation, UWB devices were to offer an Angle of Arrival capability. This, coupled with accurate distance measurement, would provide the capability to locate an object with reasonably high precision in 2-D from a single anchor. This would significantly simplify the installation of indoor location systems.

In conclusion, indoor positioning technology has a lot of value adding use cases. What has been lacking are solutions that are sufficiently cheap and, perhaps more importantly, easy to install.

The technology to change this has developed slowly until now, but it has perhaps reached an inflection point where more widespread adoption will drive it on an accelerated development path.

Standing the test of time