VCSEL technology encourages progress in biometric solutions such as mobile 3D sensing, according to Bianka Schnabel.

Many of the key technologies behind advancements in mobile devices, including smartphones, tablets and wearables, are based on the ubiquitous use of light. This does not only include visible light such as display lighting or flash applications.

Gesture recognition, iris scanning or facial recognition are just a few examples of how invisible infrared light can be used in mobile devices. What role can VCSEL technology (vertical-cavity surface-emitting laser) play in this space?

First, what is VCSEL? A VCSEL is a semiconductor-based laser diode which radiates the light vertically to the surface of the semiconductor chip, as opposed to edge-emitting laser diodes, where the light exits at the edge of the chip. As a surface mountable component, VCSEL combines the characteristics of a LED with those of a laser. VCSEL technology has been established and matured within the datacom industry, serving in data infrastructure links for more than 15 years.

The technology can also be used as an array – a composite of several hundred or even thousand VCSELs – for example a chip with 500 apertures of 1 mm x 1 mm, glued and bonded like a normal LED.

VCSEL use in biometrics

Biometrical user identification methods are the most reliable and secure access options that are currently available. They are an alternative to complex password management tools for mobile device security, access control, and increasingly authentication for mobile payments and other transactions. The need for these solutions is driven by users increasingly managing all aspects of their digital lives via their smartphone and other mobile devices which accelerates the development progress.

Biometrics make use of human characteristics, such as specific structures within the iris, facial features or fingerprints. Sensors identify these characteristics and compare them with previously stored biometrical data. In order to function reliably in mobile devices, infrared light is required to illuminate the target area. This technology was already being used in access control systems, with most countries using it for immigration purposes. But with a growing miniaturisation of infrared LED technology the adoption in mobile and consumer devices has been gaining speed. Now VCSEL technology is complementing infrared solutions enabling the utilisation of these applications in a wider market.

VCSEL technology is not a new invention, but has been used previously for data communication. Recently, a multitude of application opportunities in different markets have been identified. The decisive features of the surface emitter are the lower production costs compared to edge emitters and the superior beam quality but lower output power.

VCSEL technology is primarily used for application fields like smartphones, drones and Augmented and Virtual Reality (AR & VR) devices where high-speed modulation is an advantage. 3D sensing applications such as facial recognition, especially for consumer

LEDinside anticipates that the global infrared laser projector market for mobile 3D sensing is forecast to grow to around $1.9billion by 2020. 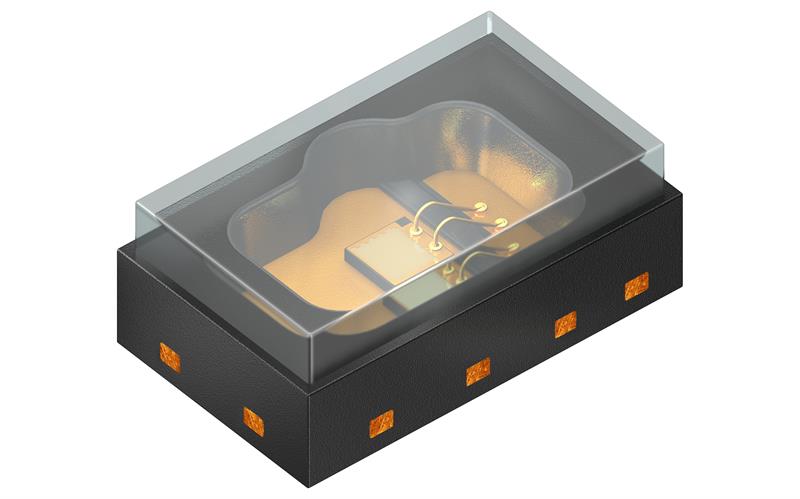 VCSELs can be modulated with high frequencies, making them useful for optical fibre communications.

In addition to the high beam quality of low-power VCSELs, an important aspect is the low beam divergence, compared with those of edge-emitting laser diodes, and the symmetric beam profile. This makes it easy to collimate the output beam with a simple lens, which does not have to provide a very high numerical aperture.

Much higher powers can be generated with VCSEL arrays. A VCSEL array with many thousand emitters (with a spacing of some tens of microns) can emit several tens of watts continuous-wave.

The effective beam quality is, strongly reduced in this case, as the emission comes from a larger area while the beam divergence equals those of a single emitter (which is, although still substantial, smaller than for an edge-emitting laser).

Such devices can generate high output powers with a high wall-plug efficiency and thus compete with diode bars and (combining multiple arrays) even diode stacks based on edge-emitting semiconductor lasers. Their emission linewidth is very small, and the emission wavelength has a lower temperature dependence than those of a conventional laser diode. Quite high peak powers are possible in pulsed operations with nanosecond to microsecond pulse durations. 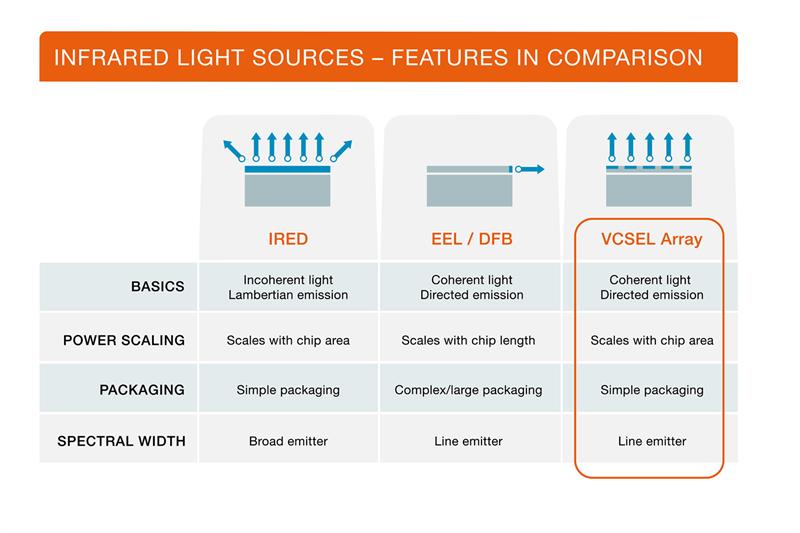 Current solutions for mobile 3D sensing include structured light and time of flight (ToF). One of the most recent smartphone models uses structured light with its dot projector producing several ten thousand dots of infrared lights on the face. Then the infrared camera receives the light reflected back from the face to create a 3D facial landscape.

Additional application fields include autofocus and proximity functions in cameras, especially in smartphone cameras. 3D sensing is also being integrated with AR and VR – for smart glasses or future smartphones and other mobile devices, including drones.

Due to its broad range of advantages such as a very small footprint, relatively low costs, optical efficiency, low power consumption, wavelength stability and high modulating rates, VCSEL technology could be key for a wider adoption of applications such as 3D sensing in the mass market.

Although the technology offers many advantages compared to existing technologies, it is not the best solution for all segments. It should therefore be viewed as an expansion of infrared and other light-based technologies. In order to help customers and clients choose the best suited solution for each application field, leading providers of optoelectronics components are looking to complement their infrared technology portfolios with a growing number of VCSEL solutions.

VCSEL technology can be used in numerous applications including a wide range of markets for end customers. The technology is primarily deployed for application fields where high-speed modulation is an advantage – like cameras or biometrics.

There are already first application examples with VCSEL available in the consumer mobile device segment.

ams and SmartSens partner on 3D and NIR sensors