With approximately 1,500 active satellites orbiting Earth, most of them carry highly sophisticated microelectronics that support communication and enable research that was scarcely imaginable a generation ago.

Telecom satellites keep people around the world continuously in touch and informed, research satellites monitor global weather, while other missions provide scientists with information on the earth’s magnetic field and geomagnetic storms.

Europe’s Copernicus environmental programme, which began 20 years ago, manages seven Sentinel satellites that deliver terabytes of data every day. It is the world’s biggest provider of Earth observation data, and that data is offered free to anyone, anywhere.

In fact, Geneviève Fioraso, the former French minister for higher education and research, speaking at Leti Innovation Days in July, said that 54 percent of the data that scientists use to evaluate climate change comes directly from space.

But with extended space missions comes the requirement for flawless performance by on-board equipment over a period of years, in a very harsh environment.

Leti has been designing components and measurement tools, for many years, which have underpinned several European space programmes and provided both emerging and mature technologies for space missions.

Emerging technologies may be born in research-and-teaching (R&T) projects prior to their selection for new missions. For example, the vector mode of magnetometers launched in the Swarm magnetic-field mission were the subject of a PhD theses and R&T programme before they were selected for that mission.

These types of projects often involve a long-term partner CNES, the French space research agency, or the European Space Agency (ESA). When it comes to more mature technologies, our task is raising equipment, devices or components to the top of the technology readiness level (TRL) scale. The end result may involve disruptive technology in the sense that the required performance is usually beyond what is currently possible, but it is always based on well-established expertise. For example, current developments in sub-millimetric detectors for missions are a major step toward increased sensitivity and polarization measurement compared to those that were used in the Photodetecting Array Camera and Spectrometer (PACS) for the Herschel Space Observatory.

Designing and developing new components for specific space projects will often require engineers to expand the applications of existing devices. Leti’s RF MEMS switches, for example, which had been previously studied for land-based operations, have been adapted to the specific requirements of space missions.

More generally, the requirement to reach TRL5 to qualify an instrument for a mission means that one can no longer develop these components only for space applications, which are a niche market.

Developing new instruments or sub-systems, such as the bolometers for the Herschel Space Observatory or the absolute scalar magnetometers for the SWARM mission, gives scientists the opportunity either to carry out completely new studies or to improve an instrument’s accuracy based on its performance in previous applications. Moreover, the demanding requirements of space missions may give rise to technologies that can be adapted to commercial use. The motion-capture applications developed by the Leti-startup Movea, which was acquired by InvenSense in 2014, capitalised on technology that Leti and CNES developed for platform attitude control.

Increasing the gain of avalanche photodiodes (APDs) without adding more than a negligible amount of noise boosts the sensitivity of photon detectors. Leti and CNES showed that APDs made of HgCdTe (mercury cadmium telluride) significantly outperform those based on other semiconductor materials, making it possible to greatly improve their sensitivity, while maintaining a nearly constant signal-to-noise ratio.

Leti is also focused on developing detectors with high temporal resolution that can detect a very small number of photons operating under the hazardous conditions of deep space.

In 2016, Leti and CNES conducted the first space qualification tests of HgCdTe APD technology, which showed that this APD can be used for a number of space applications. More recent tests demonstrated that our HgCdTe APDs could achieve 4GHz bandwidth, confirming estimates on the response time limitations in these devices, and providing evidence that bandwidths in the order of 10GHz can be achieved with them.

HgCdTe APD is also an enabling technology for inter-satellite communications in global Internet networks, where the devices’ high sensitivity can be used to reduce the complexity of the terminals, increase bandwidth, and/or reduce emitted laser power. Access to Internet everywhere will have a strong societal impact and is the application where we expect the largest number of detectors to be used and the highest potential revenue once industry is able to manufacture the detectors.

HgCdTe APDs’ use for deep space optical telecommunications will allow space vehicles exploring the far reaches of our solar system to send more data back to earth. The higher the data collection capacities of these explorers, the bigger the data rate they will need.

Another field of application is environmental science, in which the detectors can be used to study our atmosphere from space, to keep an eye on things like the exchange and storage of greenhouse gases.

This will result in a better understanding of the dynamics of greenhouse gases, thereby helping scientists to improve climate models.

A request from industry

While scientists focus on creating new technologies or adapting existing ones to support government and private space programmes, sometimes the industry’s requests are more down to earth.

Speaking at Leti Innovation Days in July, Hervé Gilibert, CTO of ArianeGroup, whose businesses include satellite-launching services, said that he would like to work with technology suppliers to make pre-launch equipment testing and validation more efficient.

“Electronic boards for us are delivering a service onboard the launcher,” Gilibert said. “Of course, we are shaking them a lot and warming them up and down. However, the ideal situation for us would be … to test the functional aspects to make sure it works as a functional chain onboard the launcher, and get rid of having to demonstrate one by one that all the equipment is qualified for the dynamic, radioactive and thermal environment of space.”

In space and on Earth, the challenges and opportunities for the microelectronics industry are far reaching.

SWARM, launched in 2013 this uses a next-generation absolute scalar magnetometer. A European Space Agency (ESA) mission, which put three satellites in different polar orbits to take high-precision and high-resolution measurements of the Earth’s magnetic field, is intended to improve our understanding of the planet’s interior and climate. ESA recently extended the mission to 8.5 years and possibly a full solar cycle (11 years).

The Cassini-Huygens Mission, was a collaboration between NASA, ESA and the Italian Space Agency to send a probe to study the planet Saturn and its system, including its rings and natural satellites. Leti and CEA’s Astrophysics Division designed, tested and fabricated infrared detectors for Cassini's Composite Infrared Spectrometer (CIRS). Spectrometers split light into different colours, like a glass prism. CIRS was special because it sensitive to invisible heat rays, or infrared light emitted by the planet, its rings and its moons.

Herschel Space Observatory, launched in 2009, saw the development of bolometers (detectors used for studying EM radiation) for the PACS installed on the Herschel satellite, in close cooperation with the CEA's Astrophysics Division. 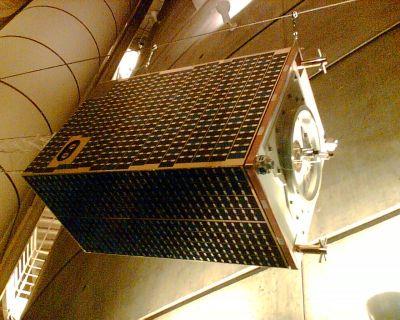 Has space reached its ‘internet moment’?