As the concepts of the internet of things (IoT) starts to gather supporters within organisations, the numbers behind Gartner’s forecast that the IoT will comprise 50billion devices by 2020 starts to take shape. The challenge facing many organisations is so crucial to their future viability that no one can ignore it.

Take the case of industrial robots for example. If you are a manufacturer of robots used today for a variety of industrial manufacturing processes you will have traditionally created your profits from selling and servicing the industrial robots. But what about a transformative affect that would allow you to provide industrial robots to your customers as a managed service, based on usage, for a monthly fee. This is what the IoT is all about. Unleashing new business models based on being able to access and interpret collected data on an on-going basis in real-time. According to the 2015 market survey prepared by the International Federation of Robotics, there were 1.48million industrial robots in use worldwide at the end of 2014. This number is forecast to increase to 2.33m by the end of 2018. With a conservative estimate of 20 IoT connected sensors in each robot that means there could be approximately 50m devices connecting to IoT applications alone.

The electronics industry is a hot-bed of innovation today and a lot of it is thanks to the buzz surrounding IoT. But it is not only about the lowest power microcontroller or wireless connectivity. Large system integrators are also grappling with the challenges associated with connecting all those sensors and actuators into organisations’ corporate IT systems such as ERP and CRM. Those 50bn sensors will need to be connected to their relevant host systems and a large proportion of them will be wirelessly connected.

One of the considerations that the system integrators and, in this example, the robot manufacturers will be seriously thinking about is the lifecycle of such a system. Industrial robots, like many industrial or traditionally capital-intensive equipment are designed with a fairly long operating life, typically up to 20 to 25 years in some cases. Connecting up such industrial assets requires an infrastructure, whether wired or wireless, along with all the associated data communications equipment such as gateways, data concentrators/aggregators and modems that can last as long. The dilemma is that during a similar period, for example, the Wi-Fi data communication standard has seen 12 iterations that have raised theoretical data rates from 2 to 6,912Mb/s. Within the transport layer the standards are still evolving as IoT devices become deployed. For resource-constrained microcontroller based sensors the CoAP protocol has recently found supporters, and other recent developments such as REST and MQTT have yet to become standards in the same way we might consider TCP/IP as a long-term deployed defacto standard.

A developer of an industrial IoT gateway, for example, might be able to design, with a high degree of confidence a solution that meets the short-term operational specification requirement for the next five years. But another 10 to 15 years after? What will happen then? The IoT is still evolving and many early adopters of IoT will not be expecting to completely re-architect their infrastructure just to take advantage of increased data rates or information-hungry algorithms. What wireless communications specifications are likely to change in the lifecycle of the managed asset?

When it comes to data communications capabilities what is needed is a far more flexible and re-configurable approach to provisioning wireless communications.

Meeting these requirements head on is a new breed of wireless transceivers that share a concept in common with FPGAs. Unlike many wireless transceiver ICs that are designed for a single protocol and frequency, i.e. Wi-Fi /2.4GHz or ZigBee /2.4GHz, Field Programmable Radio Frequency ICs can accommodate a wide range of radio frequencies and an equally comprehensive range of transmission protocols and standards.

An example of an FPRF device is the LMS7002M from Lime Microsystems. Figure 1 illustrates a block schematic of the device. Designed for programming by, in our example, the industrial IoT gateway manufacturer a FPRF includes all the key stages of a transceiver such as DSPs, DAC/ADCs, filters, mixers, PLLs, and amplifier stages. Capable of being arranged as required an FPRF provides flexible programming in the RF wireless domain. 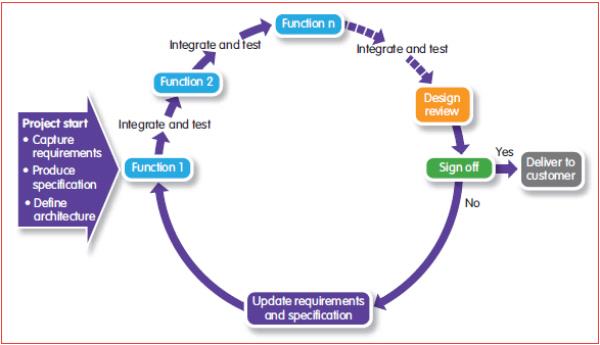 The Lime Microsystems LMS7002M is a 2x2 MIMO (Multiple-input, Multiple output), fully programmable RF Transceiver covering 100KHz to 3.8GHz centre frequency with programmable RF BW range of 0.1 to 108MHz. Supporting both TD and FD operation, the device is 3GPP compliant for all mobile standards and Wi-Fi amongst others.

The challenge associated with future-proofing wireless communication is not limited to IoT or M2M applications alone. Such a trend can be found facing cellular network operators too who are planning LTE deployments and incorporating other complex features such as RAN Sharing, Software Defined Networking (SDN) and Network Function Virtualization (NFV) all using commercially off the shelf equipment.

In the case of the LMS7002M the wireless transmission path is fully configurable, as is the receive path. Transmission modulation at the simplest level can be a quadrature phase-shift keying (QPSK), where the carrier is modulated to one of four different phases with a single amplitude. This supports low data rates and is extremely robust under poor signal conditions. When good signal-to-noise conditions are possible quadrature amplitude modulation (QAM) provides a more efficient modulation technique. For many IoT gateway applications, especially those where the signal path may suffer from fading, multi-path and other interference, the use of MIMO techniques can be used. This complex configuration uses two or more antennas separated a short distance apart adds a diversity gain that improves the link reliability and offers a more robust connection. It is more capable to deal with signal degradations due to fading and interference and also when experiencing multiple signal paths due to signal reflections from building and moving objects such as planes, trains and vehicles.

Configuration of the LMS7002M is performed via a simple SPI interface into the control logic. Working in conjunction with a host processor or FPGA, the FPRF will be fed data, in the form of I and Q data streams via a JESD207 compliant interface. The host processor will take care of data gathering or receiving, connectivity to the analogue sensor world if required, and packetise/encode it ready for transmission in the desired format. The host processor will also take care of the FPRF device configuration parameters such as transmit and receive frequencies, gain and bandwidth.

While the design of any RF application can take time Lime have made the wireless engineer’s task that much simpler with the MyriadRF evaluation board. This open source community supported board enables developers to quickly develop and test a wide variety of wireless communication designs.

IoT promises to deliver significant value to organisations as they transform their business models and services by embracing the data that an army of sensors can provide. The key to investing in your company’s future through IoT will be to have a reliable communication infrastructure that matches the lifecycle of the services and assets you manage. Provisioning a flexible and reconfigurable wireless network capability will be paramount.

Meeting the performance, power and intelligence needs of advanced applications

Long range receiver for the IoT