The Internet of Things is evolving to provide greater intelligence at the node, converting raw data into smart information. With less data to communicate, it becomes more cost-effective to integrate low power RF transceivers into the node module. Certification to wireless protocol standards ensures interoperability and the emergence of open tools will make support for these standards less onerous to developers.

The IoT can be described as a chain, starting with sensing, through measurement and interpretation, to analysis and prediction. In typical IoT applications, data is transmitted via RF communication to the Cloud, where measurement, interpretation and analysis are performed. This results in simpler nodes, but at the cost of power-hungry data communications and clogged networks. These disadvantages are removed by executing sensor analytics in the node rather than the cloud - converting data into smart information before sending it to the cloud for analysis. The challenge is to do so without disrupting the power budget or escalating the cost.

Real-world savings
With fewer collectors required to cover a given area there is a significant saving in network costs.

To illustrate, a network’s cost can be estimated with two different scenarios. The first envisages a network (figure 1) that can send data via a single tower, comprised of 27 nodes, each equipped with a transceiver chip having -128.5dBm sensitivity at 1.2kbit/s. The second is based on typical transceivers in use which currently achieve 6.5dB lower sensitivity, leading to five towers being needed instead of one. 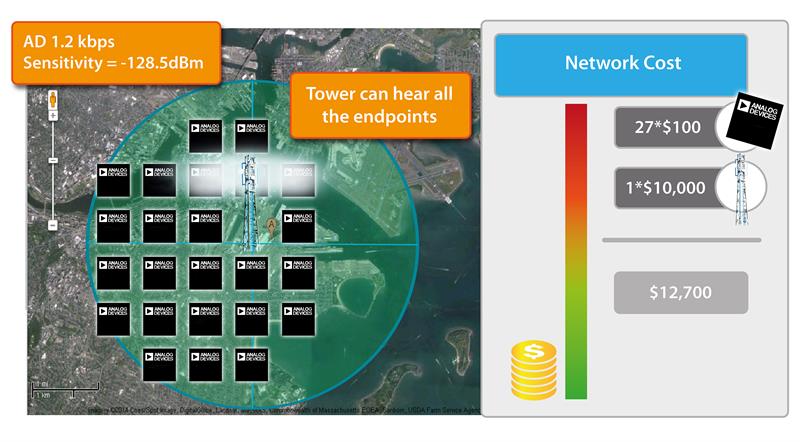 Higher performance transceivers enable further cost savings by eliminating the need for external components. Alternative designs employ a high-side switch between the transceiver and battery, but the new transceiver’s low shutdown current with retention eliminates the need to cut off the radio leakage path. Another example is the need for external low-noise amplifiers to compensate for the poor noise figure of the transceiver. With noise figure down to 5.25dB, the LNA is redundant. Last but not least, transceiver modules, having blocking performance better than 100dB, no longer need to use external SAW filters to block out-of-band interference.

Ultralow-power embedded processors
Working alongside the transceiver device, a MCU provides the intelligent heart of the node, performing sensor analytics, as well as running software stacks, drivers and interfaces. As with the transceiver, power consumption is critical for IoT applications. Datasheet specifications can be confusing, which is why the Embedded Microprocessor Benchmark Consortium (EEMBC) has established a measure that “standardises on datasheet parameters and provides a methodology to reliably and equitably measure MCU energy efficiency”.

ULPBench is a useful yardstick for IoT designs as it recognises the trade-offs between active current, sleep mode current, and duty cycle. The ADuCM3029 low power microcontroller (figure 2) complements its transceiver device with active current of 38uA/MHz and 750nA hibernate current leading to a ULPBench score of 245.5.

Further considerations include resilience to voltage drops and memory glitches, which can prematurely end product life following a crash. Features like ECC error correction on Flash memory, parity error detection on SRAM and full voltage monitoring in sleep mode all contribute to a resilient MCU.

Security is a further consideration in the evolution of greater intelligence at IoT nodes. Encryption of radio links using AES, together with over-the-air software deployment using SHA image verification, reduce the risk of ending product life due to system hack, whilst protecting the intellectual property of developers.

Certified modules
There are a number of advantages to combining the MCU and RF transceiver into a single module. Time to market is a major consideration for the fast-moving IoT. This approach is particularly attractive to design teams that don’t have equal RF and digital expertise. It also simplifies integration and reduces risk. This is especially relevant in the case of modules that are pre-certified to specific wireless protocols.

LoRa and Sigfox are the current leading contenders in the industrial IoT for long range connectivity, and connectivity modules are available for both standards. For example, Analog Devices will have a Sigfox-certified device, whilst STMicro favours LoRa.

Both standards use unlicensed ISM bands and are based on star topology. Sigfox uses narrowband technology, with higher spectral efficiency than LoRa’s chirp spread spectrum - hence better resilience to noise. Sigfox has better range so each base station can connect more devices, excels for infrequent transmissions and offers longer battery life – whilst LoRa uses more bandwidth.

Such technical issues are not as significant as the differences in business model between these rivals. LoRa is owned by Semtech and requires vendors to use Semtech modules for their development. Conversely, Sigfox shares its reference design with IC vendors, so devices with Sigfox certification can use its infrastructure.

LoRa networks are dominant in Europe, with future expansion dependent on its alliance community. Meanwhile Sigfox is rolling out its network in 100 US cities, as well as in Australia, New Zealand, Brazil and the Middle East.

Thread is the leading protocol for domestic IoT communication, designed for connected home applications including smart thermostats like Nest and voice command devices such as the Amazon Echo. The protocol uses IPv6-based networking and a variety of application layers can be used on the stack. Simple protocols for forming, joining, and maintaining Thread networks allow IoT ‘things’ to self-configure and fix routing problems as they occur. It focuses on security, as devices cannot join the Thread network unless authorised and all communications are encrypted.

The network layer is designed to optimise the network operation based on its domestic setting. Spread spectrum technology is used at the physical layer to provide immunity to interference. In contrast with industrial solutions, host devices can operate for several years on domestic AA type batteries.

Open tools speed development
For developers, open tools and embedded OS solutions will make support for these varying standards less onerous. The mbed ARM offering would appear to be gaining the most traction with all major silicon suppliers involved and basic connectivity supported.

The mbed platform helps developers create their own embedded connected devices, from planning, through prototyping to production. Software is written on top of an operating system, mbed OS, that works with mbed-enabled hardware, and can connect to the cloud using the mbed device connector service.

Designs that already have an operating system can use the mbed client to access the higher level cloud connectivity functions of mbed OS. In this way, developers can use existing services without having to use mbed OS or mbed-enabled hardware.

ARM’s in-house operating system - mbed OS - offers a simple and consistent method of controlling the hardware and interacting with the cloud. It also offers built-in integration with tools such as debugging and automated test.

From hardware, through data communication protocols, to design and development tools, it’s getting easier, less costly and more secure to communicate data in the IoT.

The IoT data deluge in industry and manufacturing

Maximising the value of IoT data