The latest generation of health sensing wearables won’t just simply measure input, they’ll enable accurate, credible and safe data that will not only help doctors but usher in an age of wearable, regulated medical devices.

Today, we’re on the verge of a third generation of health sensing technology. The first was aimed at tracking fitness, making simple measurements of inputs (such as how many steps the user took in a day) rather than outputs (how does that affect the users’ health). The second recorded easier health-related targets like pulse rate but struggled to find a use for the data.

Dr Chris Elliott, Co-Founder and chief regulatory officer at Switzerland-based Leman Micro Devices (LMD), says: “Medical devices are very expensive and people don't sell very many of them, which is why they’re so expensive, and so the vicious circle goes on. At the same time, consumer electronics are getting phenomenally powerful and cost next to nothing.

“We asked, could we break that vicious circle, could we make something that sells in high volumes to consumers, and therefore be made very cheaply?”

To this end LMD has developed and released the V-Sensor which it claims is the only health sensor that measures five vital signs – blood pressure, blood oxygen, respiration rate, pulse rate, and body temperature – to medical accuracy, completely cuff-less and calibration free, with no other devices needed.

Dr Elliott adds: “If you want to sell in the tens- or hundreds-of-millions the difficulty is not the engineering, it's the marketing. If we can come up with something that's small enough, cheap enough, and useful enough, everyone’s going to want it. Then electronics giants, like phone companies, will take it to market for us because they need the differentiation it brings.”

Working with major mobile device companies, the first smartphones, wearables and mobile devices fitted with the V-Sensor are expected to be launched onto the market in 2021, effectively making them affordable or effectively free to consumers. Results from these devices are delivered on-screen in less than one minute via LMD’s e-Checkup app.

Developed over the last nine years, the V-Sensor is a 15x5x2.7mm module with a fingertip-shaped depression on its surface, containing a MEMs pressure sensor embedded in flexible resin to transmit the pressure from the surface of the skin. The V-Sensor also contains an optical sensor (two LEDs and a photodiode constitute a pulse oximeter), a temperature sensor (a MEMS thermopile with an integral silicon window) and LMD’s custom ASIC which conditions and digitises the signals from the sensors and drives the LEDs and communicates via I2C.

“You can track several people on the same device, each with their own account. In future we will release software to identify each user from their data” explains Dr Elliott. “It will track your data, give you your trends and send the data to your doctor if required. It's a personal health device, not just a measurement machine.” 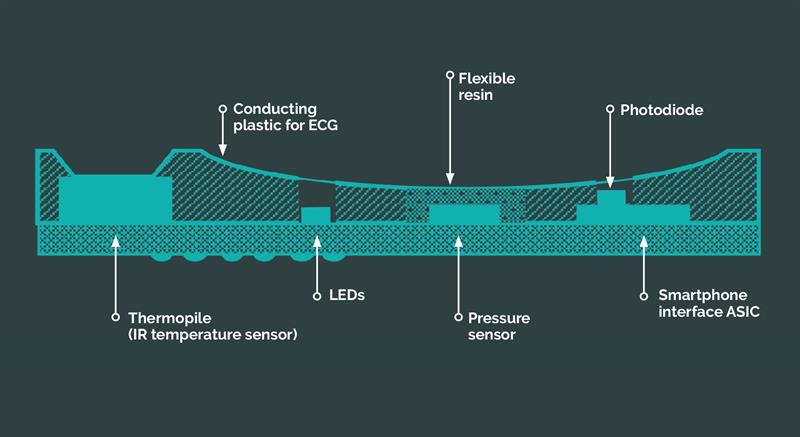 Above: The V sensor is able to measure absolute blood pressure

Hypertension is a silent killer of over 10 million people per year but can be readily treated if caught early. The V-Sensor needs no calibration, enabling users to check their own blood pressure regularly and easily. It collects around 1MB of data during each measurement and works in the same way as a blood pressure cuff. The user controls the pressure acting on the artery in their finger by pressing down on the sensor which constricts the finger’s blood vessels. The app tells the user if they need to press harder.

Similar to LMD, Finnish research company VTT and its partners are developing wearable sensors for ‘smart patches’ that are cheap to manufacture, accurately keep track of a patient's basic vital functions without interruption and can send the information wirelessly to a monitoring system.

This remote monitoring means that hospital staff could be alerted to early warning signs of a decline in a person's condition without delay, reducing the danger of complications and promoting recovery. They could also enable remote monitoring at home, meaning that patients could be safely sent home earlier than usual, saving on healthcare resources.

Teemu Alajoki, research team leader at VVT, says: “Our flexible smart patches could measure respiration rate, oxygen saturation, heart rate, and body temperature and could even take an electrocardiogram (ECG). A smart patch would send the information to a system that would analyse the data and produce follow-up information and send alarms. For example, a patient recovering from surgery could move about freely while measurements are taken, instead of lying in a bed surrounded by wires.”

The structure of VTT’s smart patch is based on printed electronics that the company has been developing for two decades. Circuitry is printed on a pliable or stretchable base material with conductive ink. Separate components, such as integrated circuits, are attached to the base with conductive adhesive, which can be done automatically in the roll-to-roll process.

The largest single component on the patch is a button-cell battery, but Alajoki says this will likely be replaced in the coming years by a flexible battery.

VTT expects the first smart patches to reach the market within two or three years. However, research projects have already moved toward next level solutions, including epidermal electronics that would be even less noticeable for the user. More research is targeting patches that combine electronic measurement of vital functions with biochemical analysis – for measuring sweat, for example, to help create better hydration strategies.

Bosch Sensortec has developed and released the BMP384, a robust, accurate and compact barometric pressure sensor which is also resistant to the ingress of liquids and dust thanks to a proprietary gel inside the packaging.

Until now, many barometric pressure sensors have not been resistant against liquids, so it has been challenging to integrate them into waterproof products. The BMP384 is based on Bosch’s BMP380 pressure sensor which had package dimensions of 2x2x0.75mm. Adding the gel to the BMP384 has only increased the height of the component to 1mm, but this is still small compared to similar sensors.

Thomas Block, senior product manager for environmental sensors at Bosch, says: “Height is normally not an issue for customers, it’s more the footprint, ours is much smaller than standard gel-type sensors which are usually about 1.5-1.7mm with a footprint larger than 3x3mm. The BMP384 is also software compatible, so a former BMP380 can be switched out if the customer sees the need for more protection.”

“Thanks to our experience and the knowledge we could bring from the automotive industry, from design to production took less time than usual – about 18 months rather than two years.”

The sensor can be integrated not just in wearables, like fitness trackers that can be used while swimming, but also in home appliances, for example in washing machines for ensuring accurate water volume measurement and flooding prevention or clog detection in vacuum cleaners due to its dust protection.

It can also be used in multiple industrial applications in harsh environments including liquid level detection and liquid or gas flow detection which could help predict when filters need to be replaced.