It’s time to start thinking outside the lines

We often describe specific fields of capability as ‘disciplines’ which, when you think about it, is kind of oppressive.

It takes discipline to stay within the lines when colouring in, or to behave ourselves in public, but do we really want to show the same level of discipline when it comes to innovation? Makers say ‘no’!

Exercising discipline has its place when designing a mass-market product to a price, but makers rarely stray into the realms of mass production because, for most, that isn’t the intention. Being a maker isn’t generally about manufacturing; in most cases, the aim is to solve a specific problem that is largely unique to them. If others have the same problem then most makers are happy to share their solution: this level of collaboration is rare in a commercial landscape. But makers don’t live in bubbles or an uninhabited planet where they have to make everything from scratch; they rely on the modern world just as heavily as the rest of us. Well, perhaps not ‘just’ as heavily, but it certainly helps to have access to basic services and tools.

Having the right tools for the job, even if the job is to make a new ‘tool’, is essential. Makers need a minimum of raw materials and the providers of those raw materials need a critical mass of customers in order to provide them. In some respects we are all makers; we consume raw materials by turning them into something we need. Take, for example, home baking, woodworking or sewing: they all involve making, and we could say the same for any form of artistic expression. Traditional entrepreneurs have a long history of being able to mend, modify or, in other words, make pretty much anything they need to get the job done, even if its useful life is short. Disposability and reusability are inherent in this kind of maker activity, and the same could be applied to technology makers: those that exploit the availability of single-board computers as their raw materials.

The ability to adapt a device to meet a need is impacting traditional manufacturing in a number of ways. Demand for single-board computers and associated expansion hardware has erupted over recent years and, as many of the projects are open source, the number of suppliers for the hardware has increased, too. Practically anyone can decide to manufacture an open source project and sell it to makers through an increasing number of (mostly online) channels. Just as eBay is now used as a low-cost eShop platform for many traditional retailers, demand for SBCs represents a new market for traditional suppliers to the electronics industry. While that is likely to continue, unlike a traditional market it will be hard for manufacturers to forecast demand, particularly because of the vibrant and constantly evolving nature of makers.

The Maker Movement is also having a significant impact in the Contract Electronic Manufacturing sector. Although most CEMs have always offered prototyping and low volume services, many are now perhaps more willing to work with makers, to provide value-added services such as production engineering, as well as low-volume manufacturing.

Perhaps the most impactful changes taking place are within traditional manufacturing facilities themselves. Manufacturing typically depends on large, expensive and bespoke electromechanical equipment, developed and provided by a third party specialising in that kind of solution. As we travel further down the road towards Industry 4.0 the balance between electronic and mechanical is shifting and the dependence on those third parties increases.

Many factories must still retain maintenance engineers to keep production lines running, but, much like modern mechanics who now need to plug in a piece of diagnostic equipment before reaching for a torque wrench, modern machinery can often be diagnosed and perhaps fixed remotely using a computer rather than a more traditional toolbox. But what if the problem is more apparent and the solution requires some kind of modification? If a production line goes down, the line manager will do almost anything to get it back up as quickly as possible, even if the solution isn’t long term. 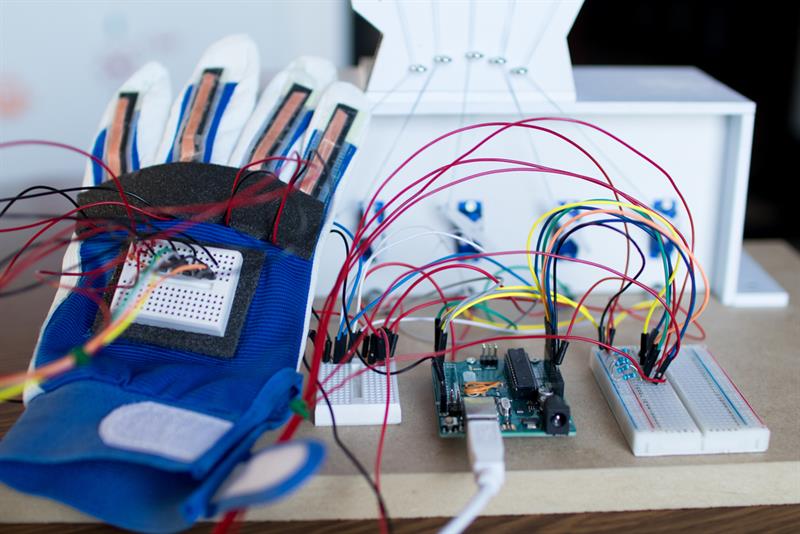 If a car radiator cracks in the middle of nowhere, a raw egg dropped into the system can be used to seal the leak temporarily. This may sound odd, but it has been known to work. A more contemporary example of the same philosophy is Tyreweld, which is an expanding foam that can be used to repair a tyre. It is commonplace today for new cars to carry Tyreweld foam in place of a spare wheel (although many drivers still prefer the security of a spare). Clearly, if the Tyreweld is deployed, the intention is to provide just enough integrity to get the car to a garage for proper repair, which would necessarily involve fitting a new tyre. Also, it can only be used in certain circumstances (a shredded tyre can’t be welded, and a simple puncture may be repairable and cost less than a new tyre), but it provides a solution, and that’s what’s important.

Technology makers within organisations can now do the same, by using off-the-shelf programmable hardware to create a bespoke fix for a problem that may not have any other ‘ready to go’ solution. The SBC provides the brains, while sensors and actuators provide the real-world interface. Connecting these things together in a way that meets a specific need and then integrating that into a large system is becoming simpler every day.

The old way of doing things involved staying within the lines, following a prescribed routine that was predictable. While that provides a lot of security, it’s rarely the only way or even the best. Makers don’t stay inside the lines, they stray outside, taking the shortest path between two points and, if those paths don’t exist, they build them on the way.

Makers may benefit from the knowledge that props up more established disciplines, but manufacturers can learn a thing or two from makers, too.

Thinking outside the box