It wasn’t too long ago that GHz frequencies were regarded as exotic; few applications took advantage of that part of the spectrum as technology was not only difficult, but also expensive. That meant that military dominated the few applications there were. The Brimstone missile is believed to use 94GHz technology for targeting purposes, rather than the lasers used in previous missiles.

However, the lower end of the GHz spectrum is now in general use; 4G mobile phones, for example, use 1.8GHz, while some LTE devices may operate at 3.6GHz. And some applications are taking advantage of much higher frequencies; while automotive radar is now using 77GHz, the first deployments of terahertz technology have been discussed.

But one development – 5G – is likely to see mobile communications systems deploying so called mm wave technology at frequencies as high as 94GHz. And Irish RF specialist Arralis is looking to take advantage of the opportunities.

Barry Lunn, the company’s CEO, said: “We are seeing a constant requirement for high frequency devices and believe that mm wave is becoming very important. Nobody else was addressing this area, so we decided to and got good results quickly.”

Lunn believes mm wave technology offers a huge opportunity for Arralis. “There are no European companies involved in the sector,” he noted, “and those in the US are subject to ITAR restrictions.”

Arralis was established by Lunn and Mike Gleaves in 2013. “We decided to focus on cracking the difficult frequency of 94GHz,” Lunn said. “Nobody had done this commercially and, if we could do it, the world would know who we were.”

The 94GHz frequency is part of the W band, which extends from 75 to 110GHz. “It provides a good attenuation window,” Lunn explained. “It’s the perfect frequency in terms of trade offs with absorption. Better attenuation means better distance and the higher frequency allows more data to be transmitted. Meanwhile, mm wave means everything is smaller.”

Arralis isn’t the first company to address 94GHz. “The US Navy has developed a 94GHz radar,” Lunn said, “but that device measured 2 x 1m. Apart from being expensive, that’s not going to fit on the front of a car.” We have taken 94GHz technology, moved it onto a chip and are making the devices at a commercial foundry, not in a boutique fab.”

In its early days, Arralis also offered RF design services. “We took a seed round of funding early on,” Lunn said, “at which point, we stopped designing for others, focusing instead on our own products. While walking away from our service base was scary, we got the timing right.”

It will come as no surprise to hear Lunn say that designing and integrating systems operating at 94GHz is ‘a big challenge’. “But if we only designed and sold chips,” he said, “we’d probably have only 10 customers. So we needed to diversify the customer base by addressing integration issues and by developing packaging technology and antennas.”

As Lunn implies, designing a chip to work at 94GHz is one thing. “Getting signals on and off the chip is just as important as what you do with them. One approach is to run systems up to the frequencies which a fab process will allow. Our view is that you need to work with the signals which people are trying to acquire and then work backwards from that point. We are focused on creating fully integrated front ends on a scalable process that can operate at high frequencies.” 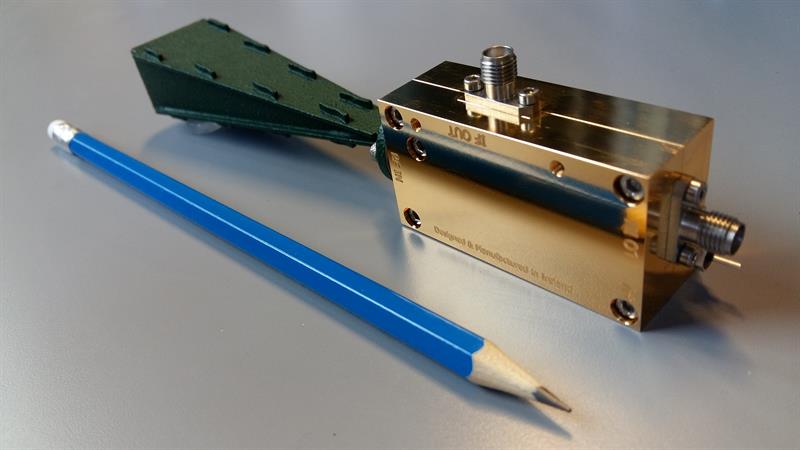 Arralis’ parts are based on III-V materials and manufactured on a foundry process. “It’s critical that everything we design is targeted at a foundry,” said Lunn, “even the antenna. If we relied on in house manufacturing, it wouldn’t be scalable; we have to ask ourselves whether we could build 100,000 units and still have the ability to develop the process.”

One of Arralis’ latest announcements came at the recent International Microwave Symposium, where it unveiled what it says are the first 94GHz transmit and receive chips. Applications for the parts include commercial radar, 5G communications and autonomous vehicles.

The parts – provided in the format of monolithic microwave ICs, or MMICs – are pseudomorphic high electron mobility transistor (pHEMT) based GaAs devices that measure 5.2 x 2.2mm. The devices can function as up- and down converters, which the company says, simplifies system integration and widens market access at the centre frequency of 94GHz.

“Any time there are multiple devices,” Lunn pointed out, “there are losses. So, we are doing a single chip instead of two.”

MMIC design can be ‘boring’, Lunn said. “But if you’re designing an entire front end for interesting things, that changes. MMICs have always been around, but the technology has been dominated by a couple of big players. With fewer hardware and microwave engineers nowadays, we’re helping to solve problems.”

As Lunn noted, one of the problems when working at such high frequencies is getting signals from the chip to the waveguide and vice versa. “We have a methodology that allows those signals to be moved on and off chip with practically zero loss,” he said. “The losses associated with flip chip packages can be huge and antennas can often be an afterthought. We are ‘dropping’ fully encapsulated devices into systems, rather than ‘fiddling’ with chips.”

Which market sectors will be taking advantage of 94GHz? Wireless communications looks to be one of the early adopters. “It’s a hugely attractive market,” Lunn said. “At this frequency, you can transmit data at 15Gbit/s over distance, even in bad weather.”

He says 5G will be ‘completely different’ to anything that’s gone before. “We don’t know which frequencies will be used where, because 5G will be a mesh. But there will be bandwidth issues with 5G and the technology we’re developing will be adopted. 5G will use frequencies of up to 94GHz.”

However, Lunn believes the biggest market will be radar based landing systems for helicopters and its attendance at forthcoming aerospace events underlines that.

The other market with potential is automotive; not only for ‘conventional’ cars, but also for autonomous vehicles. “It’s not that big a jump from 77GHz to 94GHz,” Lunn accepted, “but it’s big enough. The benefit will be the ability to capture higher resolution data. Autonomous vehicles will need radar systems that provide as good a performance as possible, particularly in adverse weather conditions.”

Lunn is in no doubt that 94GHz technology will play a major role in future systems. “Who would have thought companies like Facebook would have teams exploring mm wave?,” he asked.

“What has held 94GHz back is the lack of commercial chipsets. No doubt other companies will emerge,” he concluded, “but we’re further down the line and we can offer entire front ends.”

Terahertz technology is set to enter the mainstream, enabling better performance in a wide range of applications

The future's bright: How the led could enable a range of new applications