CubeSat is known for its low-end, low-orbit experiments, but now NASA is looking to send this 'modest' satellite to Mars.

CubeSats have, historically, been the satellites of low-orbit experimentation, often used by students or in non-critical space missions, due to their small size and cheap make-up. Using them in deep space was considered impractical, until now.

NASA is proposing ‘MarCO’ – six-unit CubeSats with a stowed size of 36.6cm by 24.3cm by 11.8cm which it intends to send to Mars. This mission is intended to display the ability of CubeSats to survive, communicate and navigate in deep space.

"If they survive, MarCO will provide a telecommunication relay for InSight during their entry, descent, and landing (EDL) phase," explains Tom Werne, MarCO’s flight software lead. The InSight mission is looking to place a single geophysical lander on Mars to study the planet’s deep interior.

"As InSight passes through the Martian atmosphere and touches down," Werne continues, "it will continually transmit telemetry, reporting on the status of the craft and real-time updates as it executes numerous critical manoeuvres."

Although this data is transmitted from InSight, it’s not possible for the signal to be directly received on Earth. Current assets used for relaying data won’t be in a configuration to support real-time forwarding, so this is where MarCO comes in.

"The mission’s two spacecraft will hitch a ride with InSight’s launch vehicle to Earth orbit, putting them on a trajectory to Mars," Werne says. "They will independently make their way to the red planet. As InSight descends to the surface and transmits data, the MarCO craft will fly by Mars, capture that data and relay it to Earth."

CubeSats tend to be used for short-life experiments and use off-the-shelf components. For an interplanetary mission like MarCO. however, off-the-shelf commercial components wont necessarily behave consistently. Due to a less controlled assembly process they can react very differently to environmental changes.

Off-the-shelf has been more affordable and space experiments normally have short-lives; are non-critical; and based within less harsh environments, so by the time commercial components start to fail, it doesn’t matter.

Analog Devices has sought to develop ‘middle-grade components’, that fill the gap between ‘off-the-shelf’ and ‘space qualified’.

Industry standards must be met but Steve Munns, aerospace and defence product marketing for Analog, reasons that the ‘embryonic’ nature of the space industry has resulted in ‘no one universal standard’. Instead, he contends, "ways have been developed to test components and a series of specifications have converged, allowing for longer-lasting, reliable parts suitable for space."

Most manufacturers complete their own testing. 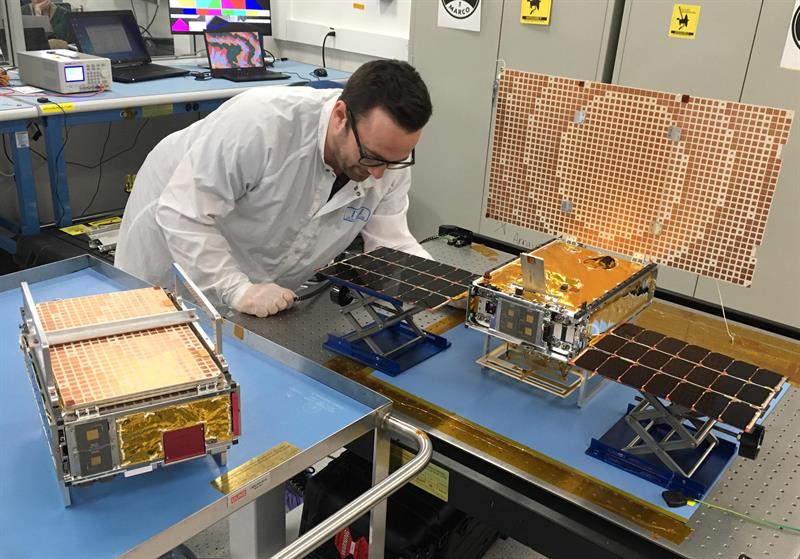 "Unlike standard commercial parts, very high-end space qualified products will undergo tests for radiation, thermal modelling and orbit. These components will come with a data sheet that tells the designer what the components can withstand.

"Launching spacecraft is expensive," Munns continues, "so there is a trade-off between cost and reliability, you have to get that balance right."

Munns believes that CubeSats are a growing market, noting that smaller, cheaper satellites are becoming more popular. CubeSats have their place when it comes to collecting data, but so do commercial space satellites. Although more expensive, Munns ventures the necessity for better space-qualified parts is vital for longer missions. The alternative is to continuously launch costly, new replacement satellites.

MarCO is made up of four discrete subsystems: a command-and-data-handling computer built by AstroDev, based around a TI MSP430F2618 microcontroller; a power system using solar arrays from MMA LLC; an attitude determination and control system provided by Blue Canyon Technologies, which is integrated with a propulsion system from Vacco; and a communication system consisting primarily of a JPL-developed X-/UHF-band transponder called IRIS.

"Leveraging the work of these companies and basing MarCO’s design around primarily-COTS components means that we have been able to focus on deep-space mission-specific aspects," Werne says. "Namely, the in-house-developed communication system, subsystem integration, and spacecraft software."

According to Werne, the propulsion and communicate systems are the crucial elements that will enable NASA’s CubeSat to operate in deep space.

Although Earth-orbit CubeSats generally don’t need to alter their orbital trajectories, MarCO will require a propulsion system that allows the craft to make mid-course corrections.

Werne also points to MarCO’s communication system as a key feature, which derives heritage from the Electra radio that has been flown on previous Mars missions. This system was designed from the ground up to be compatible with NASA’s Deep Space Network and, as Werne explains, "allow the spacecraft to interact with the existing global communication network. Without this, it wouldn’t be able to operate in deep space."

Preparing for deep space missions involves complex considerations which will never concern a terrestrial, airborne or Earth-orbiting mission. One of these is the communications link.

From Mars, MarCO’s data rate back to Earth wont exceed 8kbps and although access to the DSN is shared among all missions, MarCO is only allocated a small portion of its time.

Power is another consideration for deep space and NASA has designed MarCO to operate using solar power, however as Mars only receives 40% of the sunlight Earth does, designers had to be conscious of all energy sinks on the spacecraft.

With so much advanced technology why is Nasa looking to use a CubeSat?

"The MarCO spacecraft are launching as secondary payloads on the Atlas V that is sending InSight to Mars, so they need to be small and low-mass to minimise their impact on the primary payload," Werne explains.

Along with a small design, he adds that CubeSats have a long history and a healthy industrial community that can support them, making them ‘a natural choice’.

If successful, a deep space CubeSat won’t be the only first for this type of satellite. Several new technologies will also be used during this mission; as data will be relayed as the spacecraft enters the Martian atmosphere it will demonstrate the viability of carrying purpose-built telecommunication relays for other deep space missions.

A successful mission will also demonstrate the possibility of real-time data being relayed by the CubeSat and received from InSight. Rather than waiting for an ‘after-the-fact’ replay of data, MarCO will enable the team to get a ‘jumpstart’ on spacecraft behavioural analysis during its EDL activities.

This will be the first mission to have multiple spacecraft on independent trajectories arriving simultaneously at an object in deep space.

"In the past, relays have either been sent independently, for example on the Mars Odyssey," he says. "Or they travel together to their target and separate upon arrival, for example Rosetta for Philae.

"MarCO is the first CubeSat that has been sent into deep space to fly by another planet," Werne declares, "it is a first-of-its-kind."

This will not be the last time NASA stretches the capabilities of the humble CubeSat.

In fact, it is currently supporting a number of other CubeSat-based missions both as technology demonstrators and scientific missions. M-Cubed, GRIFEX, RainCube and PREFIRE are among the many that have flown and are now in development.

This unassuming satellite may yet surprise us all.

It's a kind of magic

Has space reached its ‘internet moment’?