With the roll-out of 5G a reality, this year’s Microwave Week focused on technologies suitable for large-scale production. By Helen Duncan

This year’s European Microwave Week in Paris was dominated, as it has been for the past few years, by the latest components and test technology that are enabling 5G. The key difference this time is that 5G networks are now a reality in many countries, and the focus has moved to technologies suitable for largescale production.

This is a particular challenge in the new mmWave frequency bands, where volume requirements have been much lower up to now. It has also highlighted the need for high-capacity backhaul in all its forms, including wireless links that are an economical and easy-to-deploy alternative to traditional fibre, and these are now moving up in frequency to E-Band and beyond in the quest for greater bandwidth.

In response to the need to connect areas of the world that are still off the map for mobile communications, there is also a growing emphasis on exploiting space, which is proving to bethe ‘final frontier’ for 5G and backhaul.

Among the key enabling technologies for both 5G and mmWave satellite communications are phased arrays and beamforming: advances in respect of the design, and also in addressing characterisation challenges, of this technology were prominent both in the conference and on the show floor. The number of antenna elements in a beamforming array, and their proximity to each other, also place demands on the power efficiency and thermal characteristics of the transmitter power amplifiers (PA), so advances in the design and packaging of GaN PAs and front-end modules are also increasingly in the spotlight.

The Forum addressed the application of RF and microwave technology in extending the mobile Internet into space. Recognising that vast areas of the globe have little or no Internet connectivity, attention is focused on a new class of satellite communication services that use platforms ranging from LEO to GEO satellites.

The distinction between military and commercial satellites is becoming blurred too, with some platforms offering dual-use capabilities and being financed by a combination of public and private funds. Skynet, for example, is operated by Airbus Defence and Space on behalf of the MoD, an arrangement that will continue with the recently-placed Skynet 6A contract. According to Higham, just one of the satellites in the latest ViaSat-3 GEO constellation will carry 1Tb/s of data – as much capacity as all the satellites currently in orbit put together. ViaSat-3, which is co-funded by the European Space Agency (ESA), is intended to provide 100Mb/s Internet connectivity to users.

The GH15 process (image below) is targeting mmWave applications in point-to-point radio, 5G, satellite communications, radar and high reliability products. It is specified with a power density of 3.5W/mm at 30GHz and 20V drain supply. The GH15 device library includes a set of models of transistors for high-power and low-noise amplifiers, switches and Schottky diodes, and the process design kit (PDK) also includes electrothermal and noise models.

OMMIC, another French compound semiconductor vendor, is currently expanding its 6” GaN-on-Si line to meet the growing demand for mmWave components for 5G and automotive applications. On its exhibition stand, OMMIC was demonstrating the performance of the CGY2651UH/C1 GaN 10W power amplifier MMIC under modulated wideband signal stimulus, operating over 37 – 43 GHz.

Despite the emphasis on GaN, there was a reminder from Netherlands-based Ampleon that a significant proportion of sub-6GHz 5G base stations are still using LDMOS (laterally diffused metal oxide) amplifiers, due to their cost performance ratio.

On display was a 5W integrated Doherty LDMOS amplifier with 33dB gain for 3.4 – 3.8GHz 5G massive MIMO applications. The company also launched a new line of ceramic- and plastic-packaged 12V transistors targeting commercial, public safety and defence mobile radio applications from 2MHz to 941MHz. With 25W and 55W outputs, they offer 18dB minimum gain and greater than 65% efficiency across all bands.

Addressing the need for wideband measurements up to 110GHz to enable the development of mmWave 5G, backhaul, satellite communications and radar applications, Keysight Technologies was demonstrating over-the-air (OTA) measurements on a 28GHz 8 x 8 cross-polarised beamforming array, using the latest single-box multi-channel functionality that has been added to its UXR-Series of oscilloscopes.

The UXR-Series oscilloscopes enable dynamic wideband analysis up to 110GHz, with the ability to configure optional 5GHz or 10GHz analysis bandwidth windows. It uses Digital Down Conversion (DDC) analysis, which removes the need for downconverters that would otherwise impair test results. EVM accuracy is below 0.6% for 5G new radio (NR) FR2 tests, and 1% for 802.11ay (WiGig) measurements, meaning that EVM measurements now reflect the true performance of the device under test (DUT), without any impairments caused by noise in the measurement system.

Once 5G is deployed in the field, lightweight portable instruments are needed for validation and troubleshooting. Anritsu’s Field Master Pro MS2090A is a real-time handheld spectrum analyser with continuous frequency coverage from 9 kHz to 54 GHz.

Demonstrations at the Show included its use as a test tool for the rollout of both sub-6GHz and mmWave 5G NR, and also for compliance testing. The Anritsu Spectrum Master MS2760A portable spectrum analyser series was also on show, with an extended broadband frequency coverage over 9kHz – 170GHz, along with a new series of higher sensitivity models, the Spectrum Master MS2762A, which has a noise floor down to -141 dBm in the range below 90GHz. This allows accurate spectrum mask testing of mmWave point-to-point radios during production, and is also suitable for measuring automotive radar, and applications above 110 GHz that include object detection radar, radio astronomy, and high-resolution military radars. 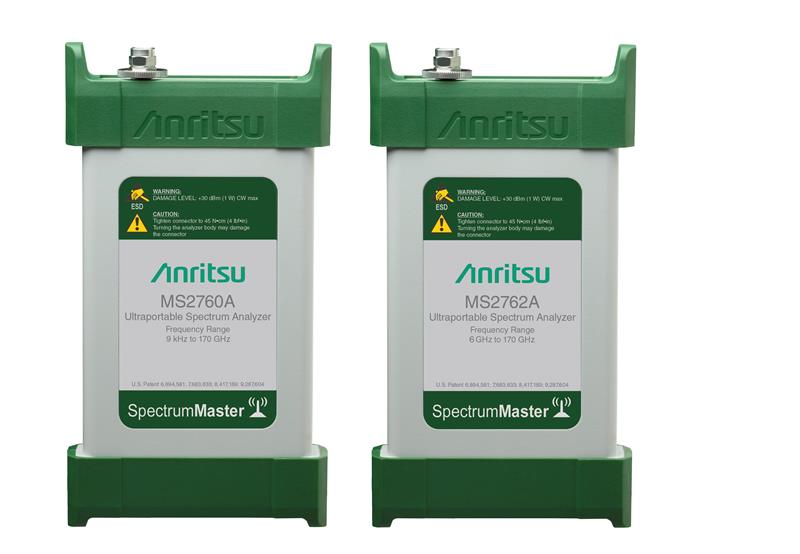 Design and production of 5G mmWave devices demands new test regimes, and with beamforming it is essential that this is performed over-the-air. National Instruments (NI) was demonstrating a newly launched PXI-based test system capability to address this need. The 5G mmWave OTA Validation Test reference architecture is designed for the characterisation and validation of 5G mmWave beamforming Antenna-inPackage (AiP) devices.

Because this approach moves the DUT in a smooth, continuous motion across the 3D space while the taking the measurements, it is much faster than a conventional OTA test setup that moves discretely from point to point. 3D spatial sweeps in the 5G mmWave bands from 24GHz to 44GHz, with thousands of points, can be executed in seconds rather than hours, shortening development schedules and improving accuracy when testing beamforming performance with complex 5G NR signals.

The system, shown in image below, includes an isolated RF chamber for true far-field radiated testing in a quiet environment, and mmWave OTA Validation Test Software.

Test will contribute to finding the most relevant frequencies for 5G