From rifles that can track targets to providing battlefield monitoring via augmented reality, the military is seriously engaging with wearable technology to help improve its capabilities.

In the UK Roke Manor Research has, working with the UK’s Defence Science and Technology Laboratory (Dstl), demonstrated wearable kit designed to help troops navigate even when they can’t access GPS, as well as to automatically detect threats and share information.

The Dismounted Close Combat Sensor (DCCS) uses inertial and visual navigation sensors, combined with advanced algorithms to provide soldiers with 3D navigation data when a GPS signal is not available, which can happen in built-up urban environments.

The drivers behind the adoption of wearable technology applications are varied but one key application is using this technology to monitor a soldier’s physical condition. By employing sensors it is possible to both optimise the well-being of the soldier or, should they be wounded in action or injured in training, sensing injuries and relaying pertinent medical data back to medical support services.

Figures show that every year fatalities are being recorded, many of which are preventable. The protection of service personnel, whether during training or on active duty, is now seen as a priority by the military.

In July 2013, during a military exercise on the Brecon Beacons, several service personnel died as a result of exertional heat illness, due in part to the demanding physical nature of the exercise they were undergoing and because of the high prevailing temperatures.

While three reservists died from the effects of hyperthermia caused by exertional heat illness, a report on the deaths found that those organising and overseeing the exercise were not monitoring those taking part and failed to understand the implications of exertion and heat illness.

Partly in response to this and to better understand thermoregulatory and cardiovascular responses to heat and other physiological challenges during training, the Ministry of Defence, via Dstl, approached Bodytrak, a London based company which had developed a light-weight, precision monitoring in-ear device.

The device which is non-invasive and portable is able to provide data in real time monitoring various body biometrics and activity.

First conceived while he was at university Marsh wanted to develop a device suitable for hydration monitoring which would be usable outside of laboratory conditions and deployable in a field based operation.

“Our focus was on functionality and accuracy. We wanted to provide a degree of monitoring that could be applied to remote workers in extreme environments, for example, or to athletes who were looking to improve their performance.

“Each individual, whether a soldier or an elite athlete, has different physical limitations, so it’s vital that we can support them and help avoid untoward events.

According to Marsh, “Our device is a personal solution that can be supported with a smartphone application, but can also be part of a much larger IoT (Internet of Things) platform which means that data can be fed into a centralised platform to display biometric data in real-time to provide remote monitoring.

“Today we are trialling Bodytrak not only to support the welfare of soldiers, but also for use with the emergency services, elite sports, medical patient monitoring and for other types of professionals working in extreme environments,” Marsh explains.

According to Alec Creighton, the company’s Marketing Director, “Bodytrak is intended to record data for later interrogation or backhaul and could play an important part in the assessment and prioritising of casualties.

“It is able to offer better information for triage/diagnosis to assist ﬁeld medics in making an informed decision in what is described as the ‘golden hour’, which is immediately after a soldier has been injured.”

Bodytrak is a hearable device that, according to Creighton, exploits the one body site from which all the individual’s vital signs can be measured accurately – the ear. 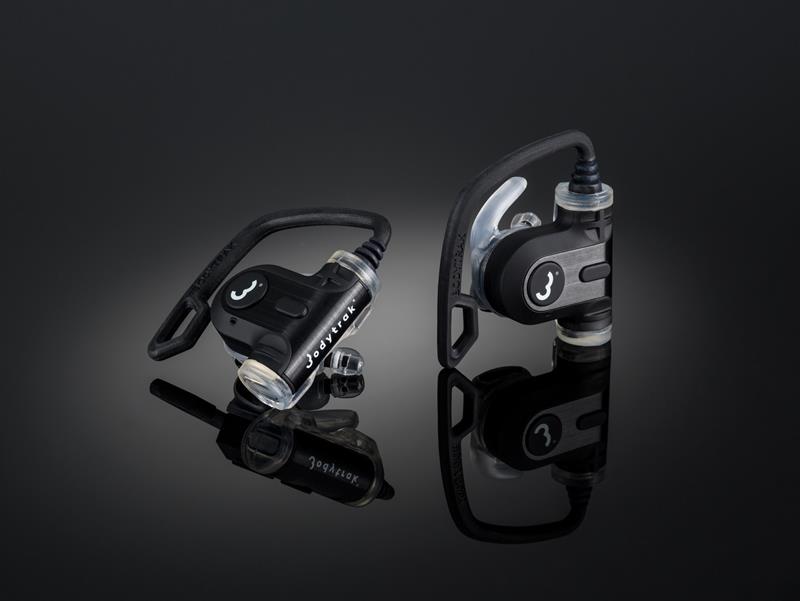 “Weighing just 18g this in-ear device can measure vital signs such as core body temperature, heart rate, VO2 and motion (speed, distance, cadence). All of that data can be collected and then sent wirelessly to the analyst or medical specialist in real-time via a smart phone, smart watch or internet hub.”

According to Creighton, by utilising miniature components, Bodytrak is able to access the ear and is able to detect changes in body physiology rapidly and accurately due to its proximity to the brain, and does so more effectively than when taking measurements from the periphery of the body – such as from the wrist or hand.

The main challenge in developing this product was its size.

“It was a major feat to develop a bespoke electrical system and mechanical integration to combine multiple functionalities in such a small form factor,” says March. “Another issue was signal conditioning, ensuring sensor signals were of a high enough quality, despite the challenges of motion (for use in active, physically demanding scenarios), and changes in environment – such as excessive heat, for example.”

In terms of embedded software, “the product's core value is its range of machine-learning algorithms, developed entirely in-house, which calibrate raw bio-metrical data and provide insightful analysis on the person's physical condition and general well-being,” explains Creighton. “The quality of the data analysis and its ability to instantaneously inform on life-critical vital signs, is where Bodytrak, we believe, can make the most impact on ensuring the welfare of military professionals.

“We offer a simple traffic light – red, amber and green - signal breakdown of current and past data,” explains Creighton. “We can also use that data to look at recovery rates and help avoid injuries.”

From a military perspective data, collected in real-time, can be seen locally by the soldier, or by a squadron commander, who can then be alerted should specific health parameters exceed safety ranges.

The use of wearable technology is not just about collecting data but also involves combining data with machine learning to provide meaningful information that is actionable.

“While we are able to monitor heart rates over time, for example, we will now be able to personalise an individual’s response to physical exertion and their exposure to extreme conditions,” explains Creighton.

“We can create tailored road maps to identify specific points when an individual may be susceptible to heat stress of heart strain and able to alert operators to the possibility of fatigue.”

As a hearable device Bodytrak is not only more accurate but can be combined with two way communications.

“It can simply be added to the existing eco-system,” Creighton explains. “It’s very easy to incorporate into the ear protection that’s already worn by most soldiers.”

The device, which remains a prototype, is set to be launched next year but Bodytrak is continuing to engage with industry partners with Open Systems architectures and the Ministry of Defence to ensure that the technology can be incorporated into existing and future technology platforms.

A new generation of protection in hazardous environments