Bethan Grylls reports on the latest technology to emerge from this year’s electronica which was the biggest to date.

Earlier this month, Munich welcomed the biggest electronica yet, with over 80,000 visitors – a rise of 10% from 2016 – while more than 3,100 exhibitors from over 50 countries provided insight into the electronics industry.

Among the exhibitors New Electronics spoke to was Murata, which used the fair to launch the SCL3300-D01, a 3-axis inclination sensor with a tilt angle output and digital SPI interface.

The inclinometer features four user selectable measurement modes which can be used to optimise the sensor’s performance for different applications and their requirements. The device also includes a mixed signal ASIC for signal processing along with a flexible digital interface that removes the need for an external ADC.

It operates from a single 3.3 V supply and is suitable for battery-powered operation in remote locations, including IoT-based applications, due to a typical sleep mode current draw of 3μA.

Murata also showcased its new narrowband Internet-of-Things (NB-IoT) cellular modem module which, at just 12.6 mm x 10.6 mm x 1.8 mm, is said to be the smallest in the world.

The module includes an ARM Cortex-M4 microcontroller (MCU) running at 156 MHz and is able to run AT commands due to the onboard SRAM and 4 MB of Flash memory. It also includes multiple GPIO lines, a UICC interface for SIM cards and SPI, UART interfaces and an open MCU option that allows designers to run their own applications.

Amid the various Rohde & Schwartz announcements at electronica, including a modular RF switch and control platform and increased functionality of its ELEKTRA EMC test software, was its Bluetooth Low Energy (BLE) signalling test solution.

This latest tool makes it possible to determine the RF characteristics of a Bluetooth LE device via a Bluetooth over-the-air (OTA) link or over a wired connection to the antenna. With this approach users can, for example, measure the level, modulation and receiver characteristics of individual or all data channels for frequency-hopping transmissions. 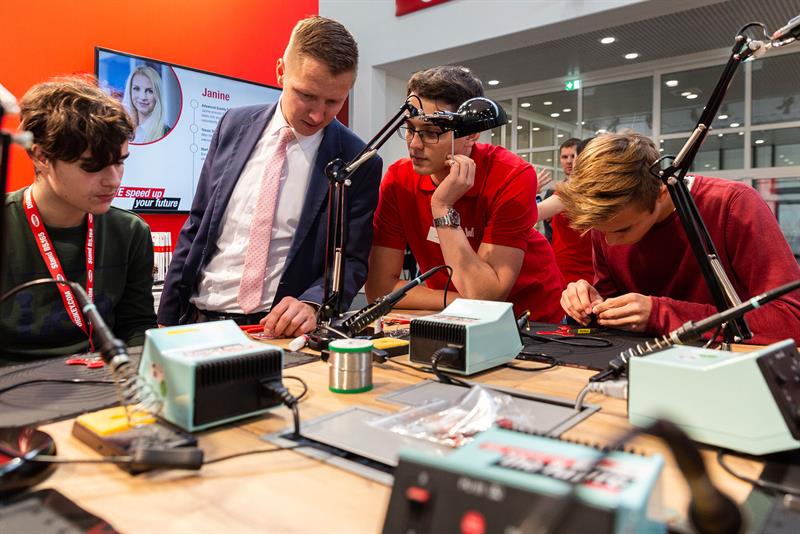 R&S also offers an advertiser testing option for its CMW test platform to measure the RF parameters of advertiser channels. The BLE signalling functionality enhances the BLE direct test mode and the BLE advertiser mode. With the R&S CMW, users can choose among all three BLE RF test modes to match their respective applications.

Cypress used the exhibition to introduce a nonvolatile data-logging solution with ultra-low power consumption, designed for the latest generation of portable medical and wearable devices and other IoT applications that demand nonvolatile memories to continuously log an increasing amount of user and sensor data while using as little power as possible.

Also exhibiting was microelectronics engineering company, Melexis, which announced a major upgrade to Time-of-Flight (ToF) technology for the automotive industry in an interactive demo. The portfolio now includes its next-generation QVGA ToF sensor chipset and a forthcoming VGA ToF sensor. Both sensors are AEC-Q100 qualified and suitable for a wide range of automotive applications, including gesture recognition, driver monitoring and people/object detection.

The MLX75024 ToF QVGA sensor doubles the sensitivity of the previous generation while maintaining the same resolution (320 x 240 px) and ambient light robustness. This allows it to operate in lower light levels or reduce the illumination power required by at least 30%. System efficiency is further enhanced by a 50% reduction in current consumption and the resulting lower heat generation allows the design of more compact cameras. A new selectable gain feature allows designers to find the optimum trade-off between illumination power, accuracy and ambient light robustness. As a result, the SNR is two times better in low light conditions and distances greater than 1m.

To support this ToF sensor, Melexis has developed the MLX75123BA ToF companion chip, which offers a three-fold improvement in front-end noise over its predecessor. The companion chip is used to configure parameters such as pixel gain, and now supports pixel binning to simplify hardware and software for lower resolution applications.