​Smartphones, tablets, televisions: touch displays are ubiquitous and are increasingly being used in modern vehicles - whether for buttonless operation of the air conditioning or infotainment system.

In contrast to consumer electronics, these functions have to face special challenges in vehicles from strong vibrations and changing temperatures to electromagnetic fields. In order to ensure that drivers can enjoy the benefits of touch displays, the technology must therefore be adapted to the requirements of the automotive industry. This is achieved, for example, by integrating state-of-the-art technologies with TDDI or OLED components, but also by means of an extensive testing and validation process with regard to resistance and function.

In this way, it can be ensured that the driving experience is actually enhanced and not diminished by advanced touch displays.

Capacitive sensors are used for touch displays due to their higher reliability and wider range of functions. While panels in household electronics are becoming thinner and lighter, this poses a greater problem for vehicles. There, the sensitive sensor technology is subject to stricter requirements in terms of service life and environmental influences, which is why more robust displays have been developed - but at the expense of lightweight construction. Nevertheless, precise sensor technology is still necessary in vehicles in order to provide the levels of comfort that are associated with modern vehicles.

While high rigidity of components is also important, touch displays should still be flexible enough in an accident to reduce the risk of injury in a collision. It is therefore important to protect the sensors and the driver on the one hand, but also to bring familiar features into the passenger cell on the other.

This can be achieved by integrating the individual components into the display. When the electronics are applied to the outer layers (Outcell Technology), they are more exposed to temperature fluctuations, vibrations and electromagnetic fields. As a result, the sensor and the microcontroller need to be built deeper and deeper into the panel (Oncell technology). The advantage of such a design is the basic structure of a touch component: the heart of every touch LCD display is the so-called cell, which essentially consists of a protective TFT glass layer (Thin Film Transistor) on which TFT circuits are mounted.

Above this is a layer of liquid crystals, which is closed at the top by a colour filter and the corresponding glass layer. This entire element is enclosed by the polarization filter. From below, the display is supplemented by a backlight, and protected at the top by a cover glass. The deeper the sensor technology is built into the cell, the more the surrounding components offer protection – and a slimmer, thinner design becomes possible.

Limiting the number of layers, in the optical "stack", results in lower reflection and improved solar radiation, without increasing the brightness of the backlight.

Initially, the so-called outcell design was common for the development of touch displays. Here, the display was connected to the sensor by a bonding process. The biggest advantage of this design is that any display technology preferred for the application can be used. For example, any commercially available touch sensor that meets the requirements can be combined with the display. However, this means that the sensor technology rests externally on the polarisation filter, which makes the entire component thicker than is desired in consumer electronics.

In order to counteract this disadvantage of the Outcell design, the Oncell design was established as the next step. Here, the sensors within the display are mounted directly on the cell, which already leads to a thinner construction possibility due to the integration. This trend towards thinner displays is reinforced in the automotive industry today with the complete integration thanks to the Incell variant in combination with TDDI technology (Touch and Display Driver Integration). This allows sensors and even controllers to be moved right into the centre of the display - optimally protected.

The advantages of this design are a thinner module and improved optical quality. The production process itself is also accelerated by this design, since fewer production steps and suppliers are required for an Incell display. 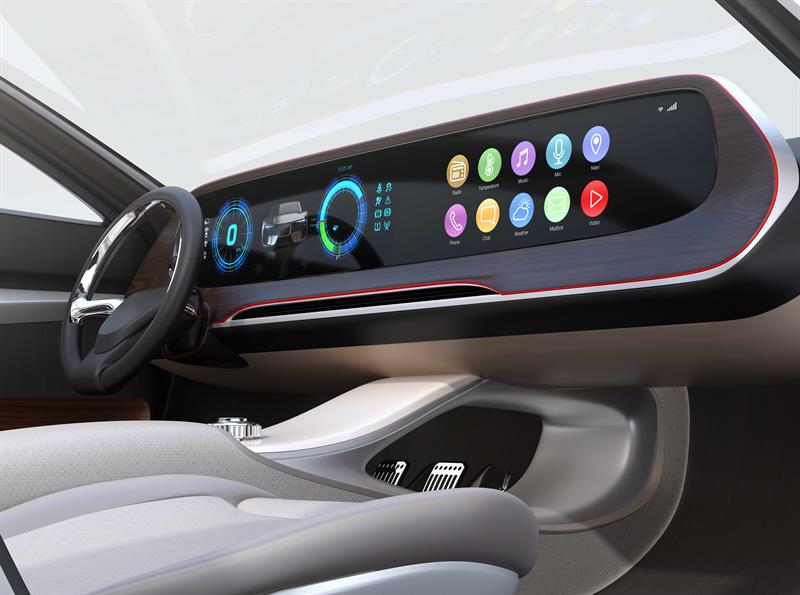 However, with the complete Incell integration of sensor technology and controller, not all challenges for touch displays in vehicles have yet been mastered. This is because many automobile manufacturers have high demands and special requirements.

One of the most common demands is for a water-proof design, for example, in which touching by raindrops or condensation is recognised and then ignored by an algorithm in the touch system software. Thanks to this technology, the system can be operated even in moist conditions without an unexpected behaviour.

Another often requested feature is a display that allows touch gestures even when passengers are wearing gloves, the details for such features vary from manufacturer to manufacturer and must therefore be tested and developed for the respective performance requirements.

In order to ensure smooth series production, reliable tests that meet the standards of objectivity, reliability and validity are already required during prototype construction.

To this end, the respective test procedures should provide the same conditions for each component.

ARRK Engineering is an automotive service provider and is able to provide test services for display and control systems. All customer requirements can be checked with the help of the comprehensive know-how of the experts for touch displays and extensive analysis and test equipment. For example, automated endurance and stress tests can be used to check certain points in rapid succession in order to detect possible deviations on the entire touch surface and eliminate sources of error at an early stage. In addition, the use of standardised gloves with different materials makes it possible to test functions for different applications.

ARRK can assist with extensive knowledge in the selection of suppliers as well as provide technical and organisational support for the nomination process.

Driving other trends for touch displays are also finding their way from household electronics into the car. For example, OLEDs (organic light-emitting diodes) are increasingly being used in vehicles, in which each individual pixel represents a light source in its own right.

In conjunction with TDDI technology it is possible to develop curved yet thin touch displays - enabling numerous new designs. Touch and Display Driver Integration is the integration of the sensor into the display electrodes on a single chip. This technology combines touch functions directly with the display, resulting in higher production efficiency and the possibility for brighter screens. Other advantages of such a manufacturing method include a thinner display module, improved optical performance and a simplified supply chain.

Developments such as "Quality of Life" features for haptic feedback are also being integrated into modern vehicle displays. Using different types of actuators, different parts of the display can be moved in the micrometer range. This gives the driver the feeling of actually pushing or turning a physical button. If this is supplemented with "force sensing", different functions can be activated depending on the force of the fingers applied to the display.

As much as the automotive industry can learn from the use of touch displays in the entertainment industry - the reverse would also be possible.

After all, the increased requirements with regard to heat, vibration and electromagnetic compatibility in vehicles also open up new possibilities for consumer electronics. A smartphone, for example, could benefit greatly from greater resistance despite thin and flexible components. This means that consumer electronics can also benefit from the latest developments in the field of touch displays in vehicles.