Activity in the global space sector is exploding as a growing number of projects look at manned missions to the Moon, Mars and beyond.

The global space sector has been growing rapidly over the past decade and today over 70 countries - from Algeria to Vietnam - now have some kind of space programme.

Space has always been driven by competition, primarily between nations – just think of the Cold War and the clash between the USA and the former Soviet Union - but today the commercial sector is playing an increasingly important part in driving space research and the development of new services, you simply have to look at the diverse focus of the satellite market to appreciate its impact. Commercial operations, such as Elon Musk’s SpaceX and Blue Origin, founded by Amazon’s Jeff Bezos have helped to drive this explosion in activity and have captured the imagination of many outside of the sector.

However, there are still significant national prestige and pride factors associated with spaceflight, and China’s Chang’e 4 mission and its successful landing on the far side of the Moon last year – where there is evidence of hydrogen and water ice that could support human habitation – helped to trigger a US response with new plans to increase NASA’s budget and to send a manned missions to the Moon, Mars and further afield.

This year will see a startling number and variety of space missions – in fact, that activity is now said to rival the peak of launches seen at the height of the Cold War in the 1960s.

Europe, India, Japan and China are all involved in planning complex programmes involving the Moon, Mars and asteroids. Europe is looking to send its first robot rover to Mars in 2020, while the United Arab Emirates has already launched its own robot mission to Mars.

For the US the Artemis programme will see a series of manned deep-space missions and a space station orbiting the Moon.

Nasa’s Mars 2020 project marks an ambitious, decade-long Martian exploration programme in which robot rovers will drill for soil and rock samples, which will then be collected by joint European and US missions and brought back to Earth by around 2030.

The design of the Mars 2020 rover is based on Nasa’s Curiosity vehicle and will use high-resolution colour navigation cameras, an extra computer “brain” to process images and make maps, and more sophisticated auto-navigation software.

The ‘Perseverance’ rover will collect samples and rely on what Nasa describes as, “the most complex, capable and cleanest mechanism ever to be sent into space, the Sample Caching System.”

"While you cannot help but marvel at what was achieved back in the days of Apollo, they did have one thing going for them we don't: boots on the ground," said Adam Steltzner, chief engineer for the Mars 2020 Perseverance rover mission and based at NASA's Jet Propulsion Laboratory in Southern California. "For us to collect the first samples, in place of two astronauts, we have three robots that have to work with the precision of a Swiss watch."

Perseverance comprises of a collection of robots and the Sample Caching System itself comprises of three robots, comprising of a 2-meter-long robotic arm, a bit carousel that will provide drill bits and empty sample tubes to the drill and will later move the sample-filled tubes into the rover chassis for assessment and processing and a third robot that will handle and move sample tubes between storage and documentation stations as well as the bit carousel.

In Europe, the ExoMars Rover has been developed by the European Space Agency (ESA) to deliver a number of capabilities such as surface mobility, subsurface drilling and automatic sample collection, processing, and distribution to instruments and will include a suite of analytical instruments dedicated to exobiology and geochemistry research. 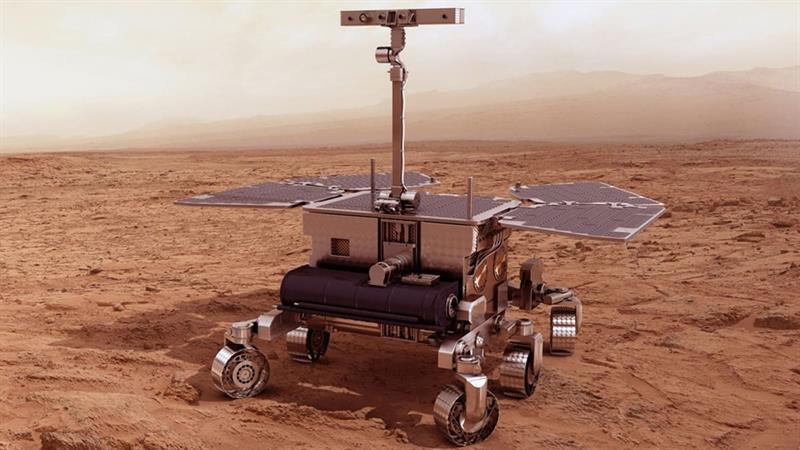 Above: The ExoMars Rover

Named Rosalind Franklin, it will use solar panels to generate the required electrical power, and will include both innovative new battery technology and heater units.

Due to limited opportunities to communicate the Rover will be highly autonomous but can be guided by scientists back on Earth, using stereo images acquired by cameras mounted on the Rover. Close-up collision avoidance cameras will also be used to ensure additional levels of safety.

Driven by six wheels, each of which can be independently steered and driven, the wheels can be pivoted to create, what ESA calls, “a sort of walking ability”, which will help it traverse soft, non-cohesive soils like dunes.

Rosalind Franklin's subsurface sampling device will then autonomously drill to the required depth (maximum 2m) while investigating the borehole wall mineralogy. It will collect samples that will then be delivered to the analytical laboratory in the heart of the vehicle.

The laboratory hosts four different instruments and several support mechanisms. The sample will be crushed into a fine powder. By means of a dosing station the powder will then be presented to other instruments for performing a detailed chemistry, physical, and spectral analyses.

The level of processing capabilities in these devices is significant and the space sector is pushing forward technology advances, whether in artificial intelligence or sensor technology.

These projects are building towards missions that will see astronauts leave Earth and head into deep space. There is, however, another critical challenge which is how do you supply food and water? NASA has recently awarded funding to two University of Arizona teams to search for water and look at how to grow food in space.

Researchers at the Colleges of Engineering and Agriculture and Life Sciences, will focus on harvesting water from the lunar surface and improving techniques for microgravity crop production.

Craters in the moon's South Pole are believed to contain water and while water is critical for sustaining human life, it can also be used on robotic missions as fuel, a radiation shield or as form of thermal energy storage.

As part of its Artemis Student Challenge, NASA has made a number of awards to different university teams to develop new methods to search for, and eventually extract, water from regions on the Moon.

The Colorado School of Mines, in partnership with University of Arizona, has developed a project that combines laser power with FemtoSats – tiny, disposable satellites.

According to Jekan Thanga, assistant professor of aerospace and mechanical engineering and head of the SpaceTREx Laboratory at the University of Arizona, "Our project is a stepping stone to building up the necessary technologies to prospect and extract water on the lunar surface."

The lasers will be used to power lights and machinery used for lunar exploration and in their search for a low-cost, low-risk way to test the viability of using laser signals for power and communication in a lunar environment, the team will deploy and use FemtoSats.

"FemtoSats are so low-cost that you can send tens, hundreds, maybe even thousands for the price of one regular satellite," Thanga explains. "Since the environment of the Moon's South Pole is so unknown to us, disposable spacecraft are a perfect way to explore these regions without risking damage to more expensive spacecraft."

The mission being proposed will involve a lander-mounted laser touching down on the surface of the moon and then launching the FemtoSats to different points on the lunar surface using a jack-in-the-box-like mechanism. The FemtoSats will receive the signal from the laser and transmit it back to demonstrate the validity of using the laser for communication.

"One of the most exciting things about this challenge is that several of the concepts, if proven to be viable as a result of these awards, could eventually be integrated and operated together on the surface of the Moon," said Chad Rowe, acting Space Grant project manager at NASA Headquarters in Washington, D.C.

Another issue is how will these proposed missions support sustainable and freshly grown fruits and vegetables?

"There's no gravity, so it's very different than watering a garden in your backyard," says Murat Kacira, director of the Controlled Environment Agriculture Center and professor in the Department of Biosystems Engineering.

"Keeping a proper balance of water and nutrients at the roots and maintaining sufficient oxygen levels for crops are real issues."

Various systems for crop production on the space station have been evaluated and demonstrated with success, including a Biomass Production System, a Vegetable Production System and an Advanced Plant Habitat.

In the Vegetable Production System, popularly known as VEGGIE, a garden about the size of a piece of carry-on luggage typically holds about six plants. Each plant grows in a "pillow" filled with a clay substrate and fertilizer designed to help distribute water, nutrients and oxygen around the root zone. 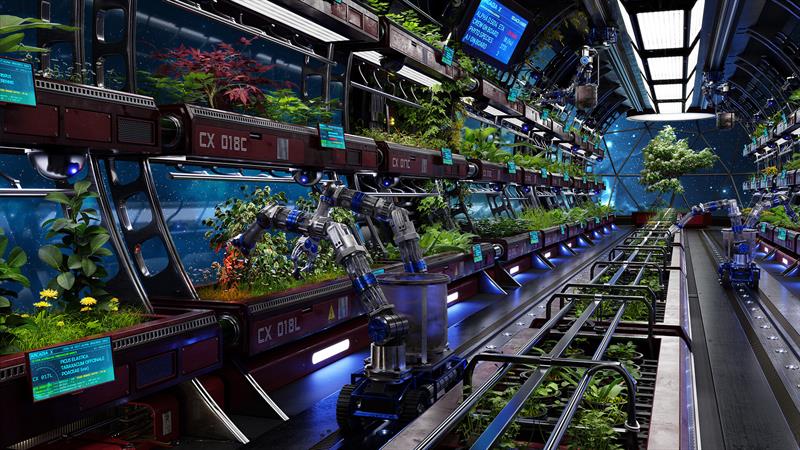 Above: The challenge of growing vegetables in space

The issue remains, however, how to deliver sustainable food production.

NASA has awarded the University of Arizona and four other investigative teams with funds to develop an improved water and nutrient delivery system for growing crops in microgravity conditions that is compatible with the limited available space in lunar surface habitats and spacecraft.

According to research conducted by Deloitte last year organisations in the space sector are integrating multiple pioneering technologies. For example, astronauts or ground-based technicians will now be able to use computer vision technologies, conversational voice and auditory analytics, as well as advanced augmented reality to repair machines in orbit.

All of this will require the use of components and systems that are radiation tolerant and able to deliver ultra-high throughput and bandwidth performance.

“The Mars 2020 rover includes a FPGA-based hardware accelerator in its Vision Compute Element (VCE) that will aid in landing navigation and autonomous driving on the Martian surface,” explains Minal Sawant, space systems architect, Aerospace and Defense Vertical Marketing, at Xilinx.

“Also included on some of the instruments is the Mastcam-Z, a multispectral stereoscopic imaging instrument, which uses a radiation-tolerant Virtex-II FPGA (XQR2V3000) in the digital box based on the MSL architecture, and the Scanning Habitable Environments with Raman & Luminescence for Organics and Chemicals (SHERLOC) spectrometer, which uses a camera system incorporating the XQR2V3000 FPGAs”

The economics of space are driven by where the rocket or satellite is going, so more fuel and more sophisticated and reliable technology will be needed when it comes to interplanetary journeys.

“For planetary missions you need to align orbits, plan well in advance and take into account severe operational conditions, in particular much higher levels of radiation. Reliability in operations lasting many years is critical” says Sawant.

The Radiation Tolerant Kintex UltraScale XQRKU060 FPGA also brings high performance machine learning (ML) to space for the first time and, according to Sawant, will provide users with a “space-resilient device equipped to handle both short and long duration missions in harsh space environments.”

The missions to both the Moon and Mars come at an exciting time for space exploration and technology has a critical role to play in helping to drive these attempts to explore further than we have done before.

That technology is enabling landings on the Moon, and then Mars, which could lay the ground work making it possible to support human habitation or long-term existence beyond the earth.

Space electronics - Failure is not an option