The Promise and Reality of 5G

In this, the first of a series of 4 weekly articles, Mark Patrick of Mouser Electronics examines the topic of 5G, the technologies that it will enable, how it will impact the industrial and automotive sectors, and how you can build 5G into your next design project.

5G has been with us now for nearly 3 years, with 5G-ready handsets appearing in stores and operators announcing coverage in larger cities. But what does it mean for consumers, and wider society? Much was written about 5G’s transformational promise in the years leading up to its launch – so where, and how is that promise being delivered?

The demanding performance specifications for 5G were defined in 2015 by the International Telecommunications Union, (ITU), in response to an exponential growth in global demand for mobile bandwidth and connectivity. With emerging applications such as the Internet of Things (IoT) and the autonomous vehicle placing large data demands on existing 4G/LTE networks. So, the 5G network designers threw away the rule book and adopted a new approach for the next generation network.

5G is about more than mobile telephony, offering 3 broad sets of capabilities to support a wide range of use cases (see below). 5G’s New Radio (NR) interface uses advanced technologies such as Multiple-Input Multiple-Output (MIMO) which uses multiple transmitters and receivers to simultaneously transmit more data and Beam Steering, along with extremely high frequencies, in the mmWave spectrum, that delivers up to 100 times more throughput, (at 10 Gbps) than 4G networks. Network densification supports extremely high demands for connectivity and cloud-edge computing techniques that deliver the ultra-low latencies, (in the order of 1 mSec), required by many emerging applications. Also evolving Low-Power Wide Area (LPWA) technologies support the large-scale sensor networks found in sectors such as agriculture, shipping, and smart cities.

The 5G architecture incorporates a technique, known as network slicing, which enables operators to combine parts of their networks according to specific customer use cases. 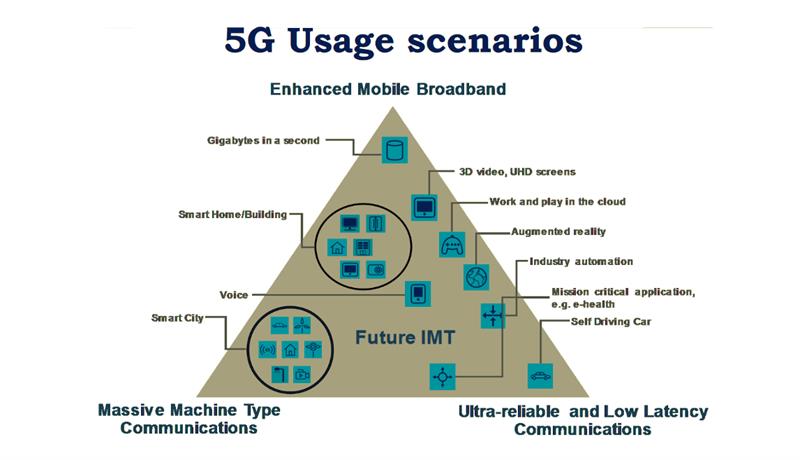 How exactly is 5G going to live up to the expectations? Higher download speeds may enable a faster browsing experience on a handset, but the benefit of this performance is likely to be low. The real impact of 5G’s contribution, as with any new technology, will come from applications that are yet to emerge, however some early examples provideinsights into what may lie ahead?

Industry 4.0 & autonomous vehicles: The future development of both the Industry 4.0 smart factory and the autonomous automobile is heavily dependent upon 5G. These will be discussed in more detail in future articles in this series but, briefly, the real-time response requirements of both robotic production systems and driverless vehicles need 5G levels of latency.

AR & VR: Augmented and Virtual Reality (VR/AR) technologies can be applied to a wide range of applications, including the above, plus others, such as gaming, healthcare, and training. Developers can now create powerful applications in the cloud, leveraging 5G bandwidth and latency to communicate with simplified devices at the “edge”, (sensors, controllers, etc.), significantly reducing the cost and complexity of these devices.

Medical technology: Collaborations between telecommunications giant Ericsson and King’s College London (KCL) have highlighted the potential of 5G to enable surgeons to operate on patients remotely, using robotic surgical techniques. At the same time, in China surgeons recently performed brain surgery on a patient with Parkinson’s disease over 3,000km away in a Beijing hospital.

IoT: The IoT is one of the main drivers of the explosion in demand for data and will continue to drive many emerging applications that will be enabled by 5G. Massive Machine-Type Communication (mMTC) technology will enable the effective deployment of large-scale sensor networks that will increasingly be found in industrial, logistical, agricultural, and smart city applications.

Although 5G is in the early stages of deployment, with many challenges still to be overcome, most analysts and industry commentators agree that the technology is set to act as a major stimulus for the next wave of growth in global GDP. A recently commissioned report for the GSMA, a trade association representing the interests of global mobile network operators, concluded that 5G will contribute $2.2 trillion to the global economy over the next 15 years, (see below), with the biggest impact being in the manufacturing, utilities, and professional and financial services sectors.

5G may have been with us for less than three years, but even before the first network was deployed, expectations on its ability to drive the next wave of economic growth were extremely high. More than just an evolution of 4G, 5G’s real value will come from a wide range of current and emerging applications across multiple sectors.

Whilst we are just beginning to discover the potential of this technology, undoubtedly the pace of innovation will accelerate as operators overcome the early challenges and roll out fully functional 5G networks.

Next time: What are the Benefits of 5G for Industrial Applications?