A team of researchers from the University of British Columbia’s Okanagan campus has created what is said to be a smart wearable device capable of sensing and understanding complex human motion.

The sensor – called the GNF-Pad – was made by infusing graphene nanoflakes into a rubber-like adhesive pad. According to Professor Homayoun Najjaran, the sensor’s durability was then tested by stretching it to see if it could maintain accuracy under strains of up to 350%. The device went through more than 10,000 cycles of stretching and relaxing while maintaining its electrical stability. 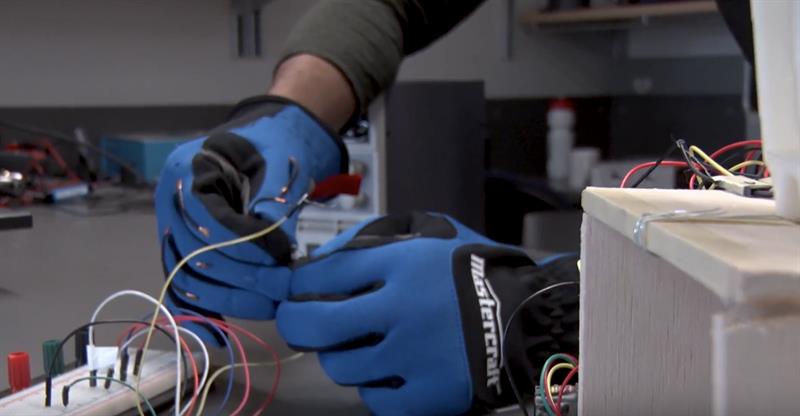 “We tested this sensor vigorously,” said Prof Najjaran. “Not only did it maintain its form but, more importantly, it retained its sensory functionality. We have further demonstrated the efficacy of GNF-Pad as a haptic technology in real-time applications by precisely replicating the human finger gestures using a three-joint robotic finger.”

The goal was to make a reasonably sized device that could stretch, be flexible and have the required sensitivity, performance, production cost, and robustness. The sensor needed to be sensitive enough to respond to different and complex body motions, ranging from small movements like a heartbeat or a twitch of a finger, to large muscle movements from walking and running.

Professor Mina Hoorfar claimed the results could help manufacturers tp create the next level of health monitoring and biomedical devices. “We have introduced an easy and highly repeatable fabrication method to create a highly sensitive sensor with outstanding mechanical and electrical properties at a very low cost.”

The team built three wearable devices – a knee band, a wristband and a glove. The wristband monitored heartbeats by sensing the pulse of the artery, while the finger and knee bands monitored finger gestures and larger scale muscle movements. According to Prof Hoorfar, the results indicate the team has created an inexpensive device with a high-level of sensitivity, selectivity and durability.