Scientists from the MESA+ Institute for Nanotechnology at the University of Twente have developed a ferro-electric material with a memory function resembling the synapses and neurons of the brain, resulting in a multistate memory.

The material that could form the basic building blocks for ‘brain-inspired computing’ is lead-zirconium-titanate (PZT): a sandwich of materials with several attractive properties. One is that it is ferro-electric, which could lead to a fast, non-volatile memory function. When the UT scientists added a 25nm thin layer of zinc oxide to the PZT they discovered that switching from one state to another not only happens from ‘zero’ to ‘one’ and vice versa, it was also possible to control smaller areas within the crystal.

By using variable writing times in those smaller areas, the scientists say that many states can be stored anywhere between zero and one. This resembles the way synapses and neurons ‘weigh’ signals in our brain. Multistate memories, coupled to transistors, could drastically improve the speed of pattern recognition, for example: our brain performs this kind of task consuming only a fraction of the energy a computer system needs. 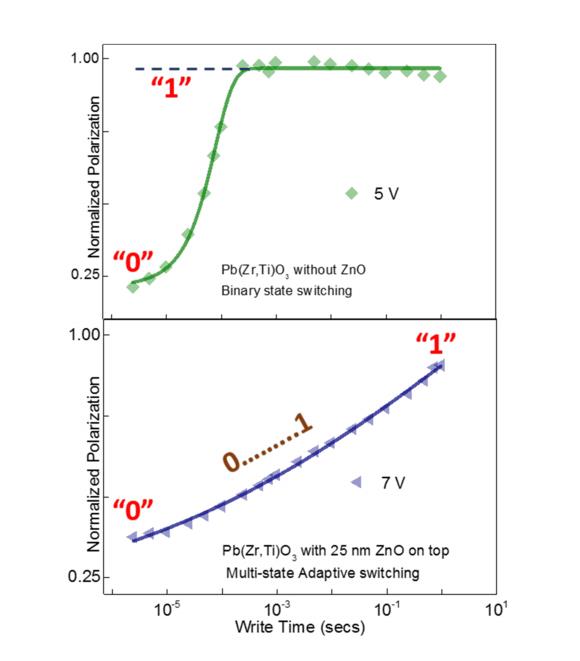 Looking at the graphs, the writing times seem quite long compared to current processor speeds, but it is possible to create many memories in parallel. The function of the brain has already been mimicked in software like neural networks, but in that case conventional digital hardware is still a limitation. The new material is a first step towards electronic hardware with a brain-like memory.

Finding solutions for combining PZT with semiconductors, or even developing new kinds of semiconductors for this, is one of the next steps for the UT team, which is also looking into the piezo-electric properties of the material.