The DRAM Market will shrink substantially this year, according to IHS Markit.

Recent concerns over market conditions, coupled with a sharp downturn in average selling prices, will lead the DRAM market to reach just $77 billion in 2019 – a 22 per cent year-over-year decline. Falling prices and weak demand will likely continue through the third quarter (Q3) of 2019, according to IHS.

“The recent decision announced by Micron Technologies to cut memory chip output, in the face of stalling demand is not surprising,” said Rachel Young, associate director at IHS Markit. “In fact, most memory chip manufactures are taking measures to manage supply output and inventory levels, to address softening demand.

Supply-and-demand growth will remain in the 20 per cent range in the coming years, keeping the market generally balanced. However, some periods of oversupply and undersupply are expected, with servers and mobile devices leading the demand categories. 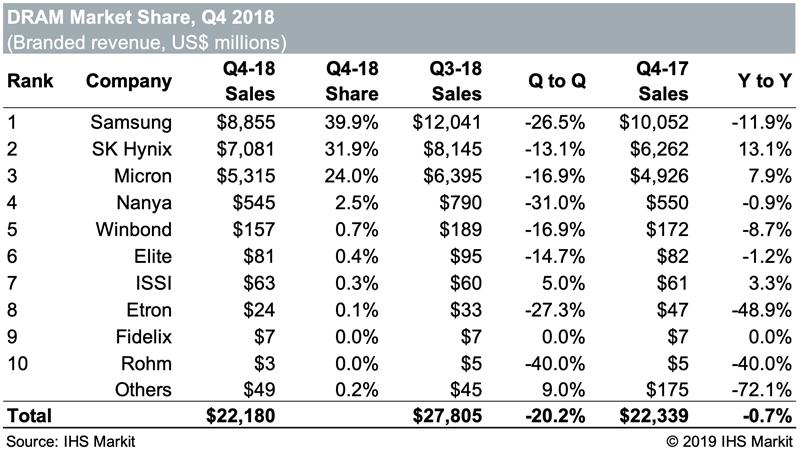 Smartphone unit shipments and content growth have slowed significantly since 2016, but smartphones rank as the second largest DRAM consumption segment. An average of 28 per cent of overall DRAM bit demand will come from smartphones between 2019 and 2023.

Samsung continued to lead the industry in DRAM volume, but the gap was smaller in the fourth quarter of 2018. Samsung has released a first-quarter 2019 earnings warning, as it is faced with a challenging semiconductor environment, particularly in terms of DRAM pricing pressures.