EnOcean, a pioneer in energy harvesting, has been developing and manufacturing maintenance free wireless switches and sensors for over 20 years, and its products have been installed in over 500,000 buildings around the world.

“We’re a pioneer in energy harvesting technology,” says John Corbett, the company’s UK sales director for Northern Europe and the Middle East, “and in the past few years have significantly grown our portfolio. We’ve got something like 4 million kinetic energy harvesting products deployed and our technology is seen as a key driver for the billions of IoT sensors that are expected to be deployed over the coming five years.”

The company’s switches and sensors gain their energy from their surroundings, so from movement, light and temperature.

“The products are based on open standards and are becoming a key foundation stone for the trend we’re seeing towards greater building digitalisation and production processes,” explains Corbett. “We’re looking at building automation, smart homes, lighting controls and industrial applications.”

At the heart of the IoT is the generation of useful data from which actions can be taken and EnOcean looks to provide, what Corbett explains as being, “a mass of data in a resource friendly way, that’s self-powered and maintenance free. We’re looking to deliver a low maintenance sensor network at scale that can then be integrated into a flexible IoT network.”

With the rapid growth in IoT devices Corbett says that EnOcean is seeing annual growth rates in excess of 20 percent.

“That level of growth is spread across various applications and we’re likely to see it accelerate as the number of sensors and applications grow.”

Data is used to better manage facilities and operations, whether that’s turning lights on and off or controlling air conditioning units and, typically, that data is sent to the cloud. Artificial intelligence is increasingly being deployed to better understand that data and to take more effective actions based on it.

“IoT business is typically cloud based and AI driven,” says Corbett. “IBM along with Microsoft are key partners, both offer AI technology. But for us that’s not what’s critical. It’s the gateway that matters and the raw data

that our sensors are able to supply. With more data being made available, the more analysis that can be conducted.”

To address this more efficiently EnOcean has launched a new multisensor – the STM 550 - which combines five sensor functions in one, small package.

“It can monitor temperature, humidity, Lux, vibration and magnetic contact in a single item, but which has multiple purposes,” explains Corbett. “Rather than providing different sensors we’ve been able to design a single unit that can do an awful lot.”

The sensor’s capabilities are impressive. In terms of temperature it can provide accuracy better than +/-0.3C; for humidity the sensor offers accuracy of better than +-3% r.h; it has two vibration modes, acceleration or orientation and can detect if it’s been moved or shaken; it is able to report the light level directly underneath the sensor and can detect the presence of a magnetic field for either door or window operation. 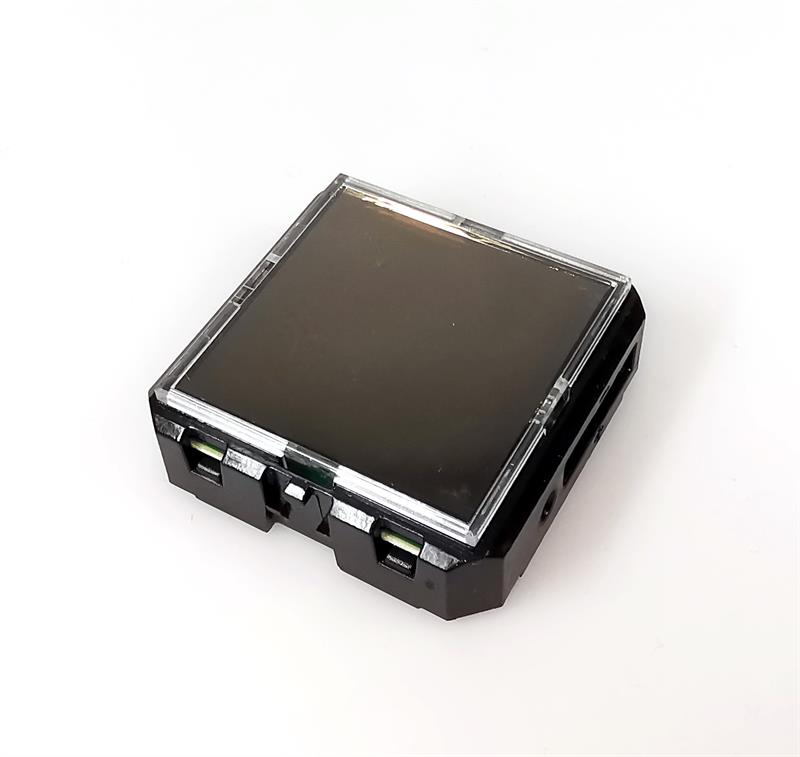 Above: The STM 550x combines the main sensors required for digitised buildings and the IoT

Solar-powered, the sensor represents a step change in capability, according to EnOcean, with its ability to provide monitoring and reporting across these five separate parameters.

“The device’s integrated solar cell means it can generate all the energy it needs to operate - both for measurement and for data communication – and that energy is gathered and then stored internally to ensure that the sensor will function even when there is little or no light,” says Corbett.

Being self-powered the sensor can be used far more flexibly in various settings and because it comes in two formats – finished, or as a module – it’s easy to add to an existing building or a new structure.

The multisensor is available both for the EnOcean wireless standard and for Bluetooth systems which makes it suitable for a variety of applications in the IoT and in digitised buildings, according to Corbett.

“For the first time, we have transferred the original PTM form factor of our proven PTM switch module to sensors, so the multisensor module fits into all common switch frames.

“As a result manufacturers of existing switch solutions based on the PTM module only need to develop new front panels adapted to the respective frame design – and if you’re only looking at limited numbers it’s quite possible to 3D print a tailored design.”

Because of that flexibility the multisensor can be installed anywhere and can be integrated directly into a wide variety of assets.

“It makes it much easier to get access to the data that’s required,” explains Corbett, “as it can be located on a wall, ceiling, window, door, in furniture, or on active devices and objects such as air conditioners, medical equipment or vending machines.”

“The multisensor comes with an integrated NFC interface for easy configuration and commissioning,” Corbett explains. “All that’s needed is a computer with an NFC reader or an NFC-capable smartphone or tablet.”

The "EnOcean Tool" app serves as the configuration interface between the multisensor and a smartphone and can be used to determine product parameters as well as integrating the multisensor into existing systems.

When it comes to the use of NFC, EnOcean has also added an NFC interface and additional safety functions to its PTM 215 switch module.

“This module has been installed worldwide and with an integrated NFC interface and state-of-the-art safety functions, it means that in addition to its traditional "press button" function, these battery-free switches can now be operated automatically with NFC readers and NFC-capable smartphones or tablets.”

“The module does not have to be removed from the switch housing, so even switches that are already installed can be configured with the app. The original PTM form factor has been retained, so that the new PTM module continues to fit into common switch designs to control lights, shutters in terms of building automation and the smart home.” 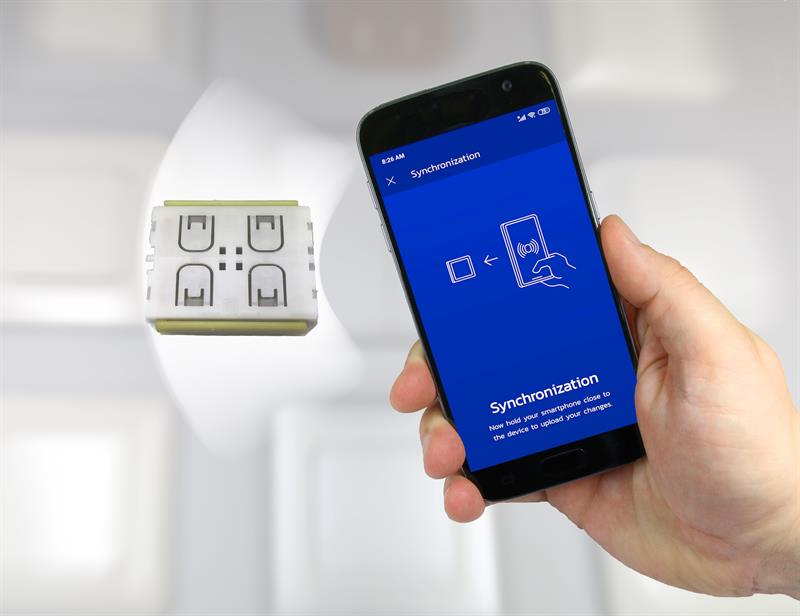 Above: The PTM 215 now comes with NFC

Using the "EnOcean Tool" a security mode can be activated which enables a project to be digitally documented and all relevant data for encryption can be stored in a project database.

An optional function, the product ID can be inscribed with all characteristics such as switch design and function, which means that the installer will know in advance whether the switch module has been preconfigured for single or double rocker switches. For remote commissioning, the app also receives all the necessary information via the NFC interface.

In addition, the rolling code is sent as a sequence code with each telegram, as is common with other protocols, which means that the initial teach-in telegram is no longer necessary.

A high level of data protection is guaranteed when exchanging data via NFC because the NFC device and reader must not be more than two centimetres apart.

The fact that the device keys for EnOcean radio communication via NFC can be changed but not read also contributes to increased data protection. In addition, a desynchronisation of transmitter and receiver is impossible because the rolling code, a continuously incrementing counter for concealment and authentication, is sent with each transmission.

In addition, the new PTM switch module is 100 % backwards compatible with the functional modes of the previous generation of the PTM 210/215.