The future of touchscreen technology in a touch-ready world

This touch technology offers clarity, sensitive, drift free response and continued operation even when scratched, has driven a change in public attitude towards touchscreens.

The modern user now has an ‘expectation’ of smartphone-like experiences with every touchscreen panel they interact with. This means challenging sectors such as retail, finance technology, industry and even outdoor signage must all begin incorporating capacitive smartphone touch experiences.

For a capacitive screen to work, it must have semi-transparent conductive matrix to be created upon the back of a glass screen. Indium Tin Oxide (ITO) based projected capacitive touch sensors are used in consumer applications as well as in less performance-intensive applications. They are, however, highly limited in their capabilities for more difficult industries.

ITO only has a resistance of 100 ohms per square, which makes them fine when used for lightweight designs with a glass thickness of 0.5-1.0mm. Unfortunately, when you begin incorporating thicker glass, the thin and fragile ITO sensor becomes unsuitable. 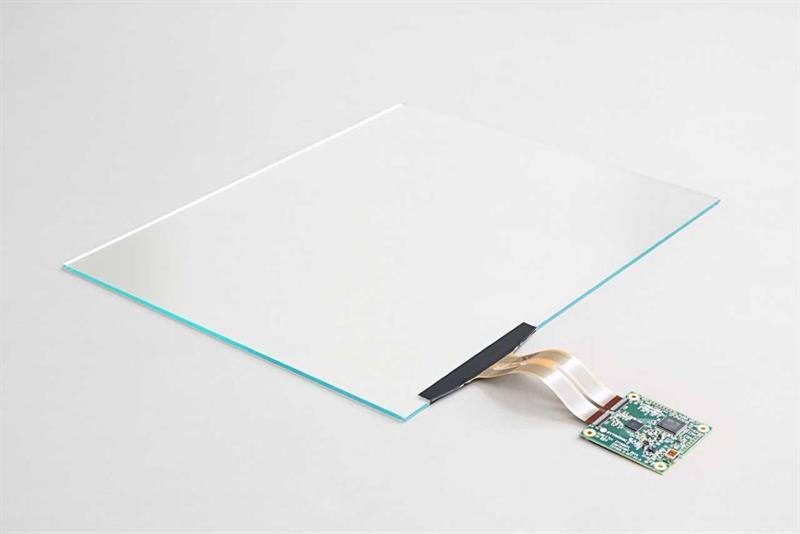 Touchscreens that are used in public-facing applications have to cope with harsh weather, determined vandalism and the stress of constant usage. Consider a touch-enabled bank ATM terminal, which needs to perform faultlessly throughout bad weather. This touchscreen must be thick enough to withstand determined attack. Consequently this thickness limits a traditional ITO sensors abilities – especially if a user is wearing gloves or rain is on the screen.

Even in industrial applications users now expect the functionality they are used to at home. In these environments, screens must be able to withstand heavy impacts, vibrations and other stresses. They must be made thicker and heavier – with glass up to 25mm. These are beyond the limitations of ITO – so a manufacturer must source a different sensor. A different material must be used on the back of the screen in order to print the matrix and create a capacitive coupling effect regardless of thickness.

Zytronic, a UK touchscreen manufacturer, uses near invisible, 10 micron diameter copper tracks deposited on the rear surface of glass touchscreens as large as 90-inches diagonal to register inputs through screens as thick as 30mm. Copper has an electrical resistance of around 5 ohms per square.

As domestic screens are getting bigger and reducing bezels, customers have begun to expect that all screens follow this trend. In industrial LCDs, public venues and showrooms, there is a push to reducing bezel size and increasing screen size. For these large displays, ITO sensors cannot offer the performance required. Customers now demand seamless touch experiences even on the largest of displays.

Commercial touch will try to catch up with consumer devices as the next few years take shape. Haptic feedback has been available on smartphones for awhile, and now commercial technology is trying to catch up. Unfortunately, larger displays limit vibration and therefore pose a challenge. Consumer technology relies on piezo electronic actuators mounted to the periphery of the screen’s read, whereas a heavy self-service screen would draw too much energy. In weathersealed screens, there is no room at all for vibration.

This is a clear example of how commercial tech must try to think creatively to adapt. Installing physical controls such as buttons and dials is one solution, giving people more hands-on feedback when interacting with touch. This also helps from an accessibility point of view, as visually-impaired users who turn to ATM terminals on the high street will still require some level of physical interaction to guide their touchscreen interaction.

These controls can be embedded within and may protrude from the screen, or can be machined directly to create dimples and grooves to guide touch. This helps create a ‘phygital’ interface that can be used without necessarily having to look at the screen.

These challenges are also opportunities, and it is for manufacturers like Zytronic to tackle them head-on and create responsive touch experiences across displays that are larger and thicker than ever.

Multi-touch interactivity is helping to redefine the in-store customer experience.