When one considers the word ‘toy’, technology might not be the first thing to come to mind, but according to analysts, TechNavio, one of the key drivers for the toy market, which it predicts will see global growth of £1.15 billion between now and 2023, will be the adoption of STEM.

“Parents are always looking for products that can assist in the intellectual development of their children,” the report reads, “and this will further boost the demand for smart toys.”

A report from Juniper Research also revealed that as connected toys become more affordable, educational toys will find a place in the school curriculum. Osmo, for example, a system which enables an iPad or iPhone to merge physical play with digital real-time feedback, has been adopted in over 30,000 schools in 42 countries around the world.

Osmo games revolve around improving English, Maths, Art and Coding – and with coding now being part of the school curriculum, toys that can help develop not just students’ coding know-how but also teachers’, are increasing in popularity.

“Teachers’ skillsets aren’t at a point yet where they can pick up a robot and design a lesson around it. They need support,” said Binary Bots’ Head of Business Development Tim Hill.

Binary Bots’ resources and activities are all based around the UK curriculum, providing an accessible scheme of work for teachers. Its ‘Cardboard to Code’ kit is designed to deliver basic knowledge of inputs, outputs and how the code interacts with a real-life object.

The products were, in fact, developed around teacher and child feedback, according to Hill, and based on something he describes as ‘integrated and engaged learning’. Coding in school is usually screen-based, he noted, yet the enjoyment and benefits, i.e. retention, children reap when they can see the actual physical reactions of their work is a far more effective teaching technique.

“Approximately 70% of attention is lost with didactic teaching. If you introduce interactive learning, you’ll capture about 90% of the class’ attention.” He highlighted the Binary Bot ‘Flat Pack Robot’ set as a prime example of this ‘new’ learning style – a toy where the child builds the robot, adds the components, and then codes it in order to bring it to life. 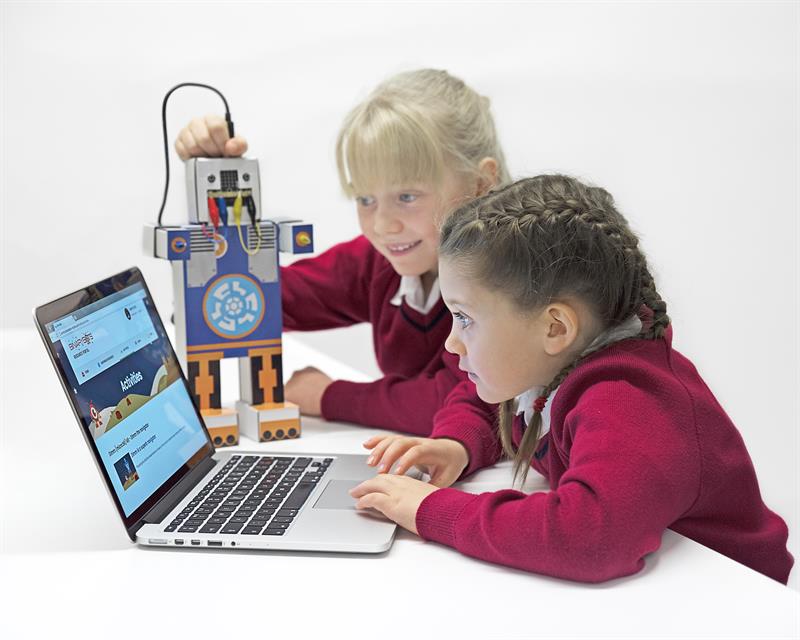 To code the robots, the kits employ the BBC micro:bit, which has seen huge success, with 90% of users saying it showed them anyone can code, and 50% of teachers who used the technology reporting they now feel more confident teaching coding.

“We feel that coding and computational thinking are a key foundation skill for the 21stcentury,” remarked Gareth Stockdale, micro:bit Educational Foundation CEO, “and that physical computing as epitomised by the micro:bit is key to making those first steps easy and engaging.”

Hill added: “The micro:bit is a great kit which eases users into coding and offers a stepping-stone into the more complex levels – and that’s why we built our kit around it.”

Binary Bots is a typical example of why the tech and toy world has started to merge. Starting out in education, where the company solely sold kit to schools, Hill said it became evident that there was a consumer demand. “Parents were asking where they could get these ‘toys’ from. They are starting to realise we are in the midst of a digital age.

“The kids are an ‘Alexa’ generation; everything is at our fingertips, and kids want to know how and why it all works. Our company saw a demand and extended its offering into the retail market two years ago, where we branded Binary Bots as a STEM toy.”

He admitted that although STEM toys aren’t new to the sector, they have had to evolve in order to maintain relevance. “When I was young it was ‘grow a crystal in the bathroom’,” said Hill. “Now we are getting more robotics-based toys. The problem is that a lot of these products are very expensive, so companies are presented with the challenge to try and make them more affordable.”

Great Gizmos has also identified STEM as a trending product, and as such, offers coding kits like ‘Code A Maze’. This includes a robot – that poses a challenge e.g. get from point a to b – a mat on which the robot travels, and a set of cards with arrows on. Once a challenge has been set, the child programmes the robot’s route by placing the appropriate (direction) cards against the mat.

According to Judith Dayus, MD of Great Gizmos, this will help young children to start thinking about what steps are required to move a robot in a certain direction – skills that can be transferred to coding. She adds that it also offers a young person the upper hand when they do start school, a valuable and sought-after quality in STEM toys.

However, like Hill suggests, Dayus says Great Gizmos has also identified a need for giving teachers an upper hand too. Its Logiblocs kit, which aims to teach children about electric circuits, comes in smaller packs for the toy market, as well as a bigger educational kit that features a teaching guide. “Teachers don’t necessarily know about electric circuits or how to teach it – it’s quite new for them,” she said. “This kit explains it in an easy way, giving them a series of class projects.”

She continued: “Kids are using technology more and more, so the toy industry has had to keep up with this. We embrace screen time, but at the same time, we realise it’s important to have play that is technology based yet not attached to the mobile or iPad.”

In fact, according to a report from Ofcom on Media Use and Attitudes, 21% of children aged 3-4 now have their own tablet, this increases to 55% among 12-15 year olds. Furthermore, 83% of children aged 12-15 have smartphones, with 99% of them spending an average of 21 hours online a week. 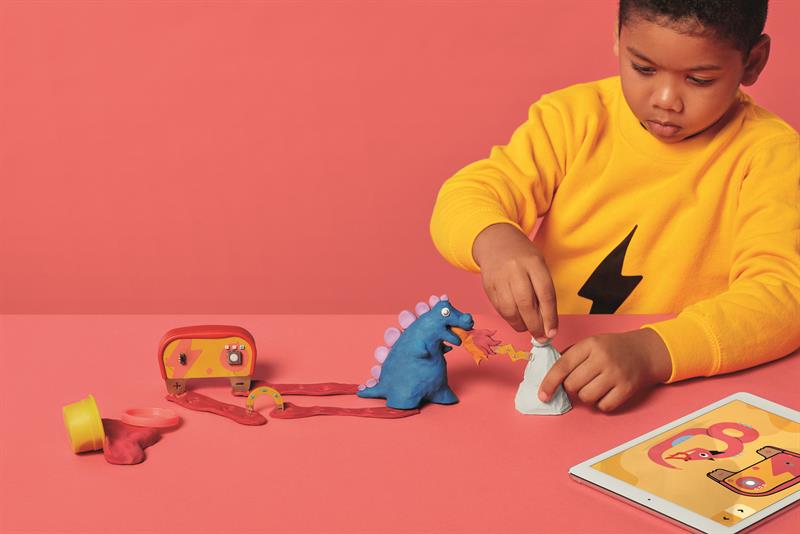 And, according to Juniper Research, smart toys will represent an $18bn hardware and software market by 2023, driven by the growing popularity of smartphone connected toys and related in-app purchases, which are projected to grow by 69% annually over the next 5 years.

Graham Spark, Sales Director at TrendsUK, like a lot of tech toy companies, has acknowledged the increased screen time, admitting that it has influenced some of their products. “For 2019, we have introduced a lot of augmented reality (AR) toys. With children becoming so involved with technology it was an obvious decision.”

It also allows for an increasing learning opportunity, he added, pointing to TrendsUK’s V8 engine kit as one example. In this pack users are provided with the tools to not just build a working motor, but have the opportunity to extend learning with a complementary app that augments the engine through a phone. This means the user can see how the engine works from different angles, pull layers away and read about each component.

Oliver Claxton, EMEA Sales for Tech Will Save Us, a company that solely focuses on educational toys, noted that as a result of increased mobile device usage, it is vital for toy firms to encourage ‘positive screen time’. This refers to the amount of time spent on a device such as a tablet.

The British Toy and Hobby Association (BTHA), has revealed that screen time is a massive concern among parents. In a survey of 1500 parents, 75% stated that they believe excessive screen time will make their children less sociable later in life, while 65% say they think it will make them less active. Despite this, many parents confessed that they are struggling to find the right balance between screen time and unstructured play, with 37% saying that their child was spending less time playing with traditional toys than last year.

To help accommodate for this, Claxton said that Tech Will Save Us has designed all of its toys to have practical as well as screen-based tasks. For example, its Electro Dough Kit, provides step-by-step guidelines on how to make your own dough, and includes LEDs and batteries to teach children about how electricity works and what a conductive is. While its ‘Sew and Glow’ kit provides children with an ‘electro thread’, teaching them not just about electronics but also the skills needed to sew.

Osmo, which has also embraced the merge of digital and physical play, actually set out to address what it describes as the “concern of many parents” regarding “how their children interact with technology” by developing a product which utilises technology “without losing the value of hands-on play”.

For example, one of its iPad/iPhone enabled games, involves ‘Awbie’, a digital character which is controlled via physical blocks the user lays out in front of the screen. These blocks control Awbie’s movements, with the aim of the game to get him to reach the strawberry trees.

Using the same premise, its Coding Jam game allows users to lay out physical blocks into sequences and patterns to create music on screen. The idea behind this is to develop both musical and coding skills.

Despite coding being a clear objective for many of these toys, it is apparent that the toy sector is also influenced heavily by the technology trends emerging in everyday consumables, such as wearables.

Tech Will Save Us leverages the popularity of such technology with its ‘Creative Coder’, a device that lets children make their own wearable device through manipulation of the accelerometer and LED lights. “One child programmed theirs to prove to their parents they had brushed their teeth,” Claxton remarked.

Like many of the tech-focused toy companies, Tech Will Save Us, was originally formed as an educational business, running workshops about technology. “There was a demand to buy the products,” explained Claxton. “It went from workshops, to being used in the Science Museum, and then retailers became interested.”

As for the future, experts and future forecasts remain optimistic - despite the UK suffering a 7% drop in toy sales last year to 3.3billion, which can be attributed to the closure of Toys R Us, a poor year for licensed products, and Brexit uncertainty.

Claxton predicts growth within the AR and virtual reality toy market, adding that he does not foresee an obvious “peak” in technology-based toys anytime soon. “Coding will become the new language,” he suggested, “but there will always be a place for the traditional toy. As technology grows, it will become more mainstream in children’s toys.”

He pointed to robotics as an example. “Five years ago it was considered purely an industrial tool. As the tech became more advanced, the components became cheaper, and this enabled the toy sector to utilise it at a soft level. The only limitation for the toy industry right now is the price point. We’ll never have the most up to date technology in toys. But as technology evolves, like it did with robotics, the price of integrating it will become cheaper.”

Tech toys pose a real cyber-security threat, yet the lack of action by industry and government remains astounding

Fibre laser may lead to wearable tech and better endoscopes