Jitter can seriously degrade system operation but, as Lee Morgan explains, characterising and troubleshooting jitter on embedded systems has become a lot easier.

Fundamentally, jitter is any unwanted deviation in signal edge timing from where it should be. Jitter is a fact of life in the design of embedded systems and communication links. As such, for systems to operate reliably under a broad range of conditions, thorough characterisation of jitter is a must.

Understanding all there is to know about jitter is not for the faint of heart. Fortunately, modern digital oscilloscopes are making timing and jitter measurements almost routine, as the following examples will show.

However, measurement statistics by themselves give little insight into the manner of frequency variation. That’s where graphical tools such as measurement histograms come in to give more information about the characteristics of the various measurement variations.

Take a 40MHz clock example, the jitter summary measurement result shown in Figure 1 includes an eye diagram of the signal, plots showing the histogram and spectrum of the TIE measurement, and a decomposition of the jitter into its individual components.

At first glance, the open eye in the eye diagram suggests that the clock signal has fairly low jitter. Indeed, the Total Jitter (TJ@BER) measurement value of about 554ps is about 2.2% of the 40MHz clock period. The jitter decomposition shows that the Random Jitter (RJ) component is a very small part of the total jitter.

The PJ here is about a quarter of the jitter. There are clear spectral components in the TIE Spectrum plot, indicating strong peaks at 7, 17, and 32MHz, which suggests that the jitter has significant uncorrelated DJ, perhaps caused by signal crosstalk on the circuit board or within the FPGA. Since this is a clock signal rather than a data signal, the DDJ is zero. The DCD also makes up about a fifth of the total jitter, suggesting that the clock shaping circuit deserves further analysis and optimisation. 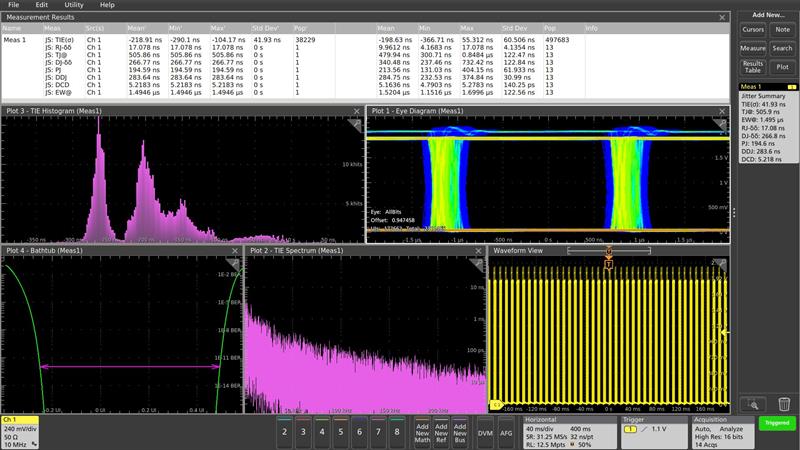 The first step in this analysis is to recover a clock signal from the serial data signal. In this case, the oscilloscope is performing a clock recovery using a Phase Locked Loop (PLL) with a narrow loop bandwidth to remain locked between data bursts. This recovered clock is then used as the reference for the jitter analysis.

Jitter decomposition shows that the majority of the total jitter at the transmitter is due to DDJ, and the random and duty cycle dependent components are very small. There is also a considerable PJ component which appears to be related to the amplitude modulation of the signal at the beginning of each of the data bursts (but not related to the individual data bits), which is visible in the eye diagram and time-domain displays.

The final example that we will look at of jitter analysis is on a synchronous logic circuit. Unlike the previous examples, this circuit has an explicit clock signal, so the jitter measurements are made on the cyan data signal on channel 2 relative to the yellow clock signal on channel 1 as shown in the lower right corner of Figure 3.

The clock rate is just 1.25MHz and the circuit board traces are short, so the signals are fairly clean, as indicated by the low random jitter and wide eye pattern. Because this circuit is using a separate clock signal, the jitter typically would not be data-dependent.

As the heartbeat of embedded systems, clocks are critical to maintaining timing references and synchronisation across components, subsystems and entire systems. As these examples of measurements on non-modulated clocks, spread spectrum clocks, serial data with embedded clock, and clocked data have shown, modern oscilloscopes offer a broad set of measurements that take the mystery out of characterising and verifying jitter in embedded systems. 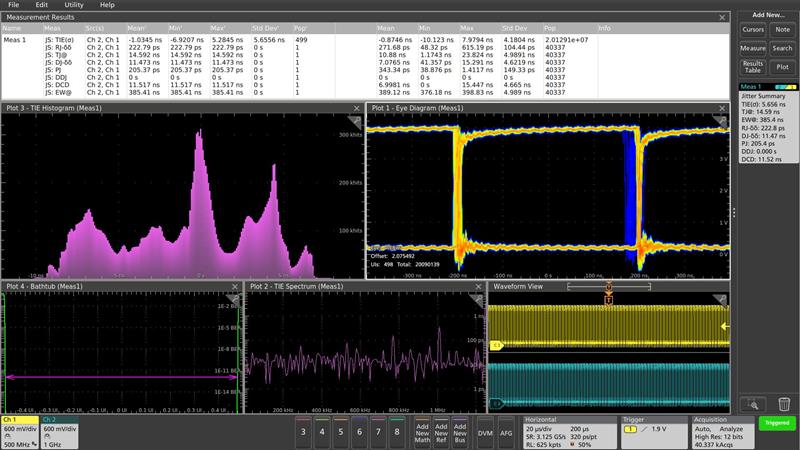 Taking the guesswork out of being human

Taking the stress out of commissioning digital hardware designs

Squeezing more out of less