The Internet of Things (IoT), Industry 4.0, digital health and greater prevalence of wearable electronics all rely heavily on the use of sensing devices that it simply won’t be practical to plug into a mains socket.

Having to regularly replace batteries can prove impractical though, especially if sensors are situated in remote or difficult to access locations.

Interest in energy harvesting technology has been growing for many years, with new implementations being based on thermal gradients, photovoltaics, vibrational forces, RF, etc. The rate at which these are being initiated, however, is still relatively low, which suggests that things have not matured as quickly as was originally envisioned with underlying doubts holding back widespread adoption.

How to glean enough energy is proving difficult, plus there are perhaps still some lingering concerns about the returns on investment.

At Embedded World earlier this year, Dr Peter Spies of the Fraunhofer IIS, talked to New Electronics about the research his team are heavily involved in developing next generation microelectronic solutions for energy harvesting purposes, with a broad variety of industrial use cases being covered.

According to Dr Spies, “One of the issues with extracting energy from the surrounding environment is, of course, that it is not constant. In most situations, external conditions will keep changing over time and therefore so will the output levels that are available.

“This is why effective power point tracking and impedance matching are both so vital.

“Another issue to be aware of is that the characteristics of deployed energy harvesting apparatus will also vary considerably, from one unit to another.”

According to Dr Spies, “For all of these reasons having access to sophisticated power management is of critical importance. It will let the system adapt so that it better addresses the specific energy profile. This will permit the largest possible amount of energy to be drawn by the system and ensure that operational efficiency figures are maximised.”

One of the major challenges faced by companies and organisations involved in the power management aspect of energy harvesting is trying to keep the start-up voltage, needed to activate devices, as low as possible.

The lower the threshold at which energy can start to be extracted, the better the chance the system is able to survive without dependency on current from a depleting battery source.

Rather than trying to tackle the problem through novel semiconductor processes, the Fraunhofer IIS team have concentrated their efforts on creating innovative power architectures.

At their heart is DC/DC converter circuitry which is based on the utilisation of a Meissner oscillator connected to a JFET (or in some cases a zero threshold MOSFET).

A key differentiator here is that the diodes which would normally feature in such an arrangement are replaced by MOSFETs (since they don’t have the same voltage drop issues). As a result, far greater degrees of efficiency can be realised (reaching over 90%), and it also enables energy extraction to be initiated at much lower levels. 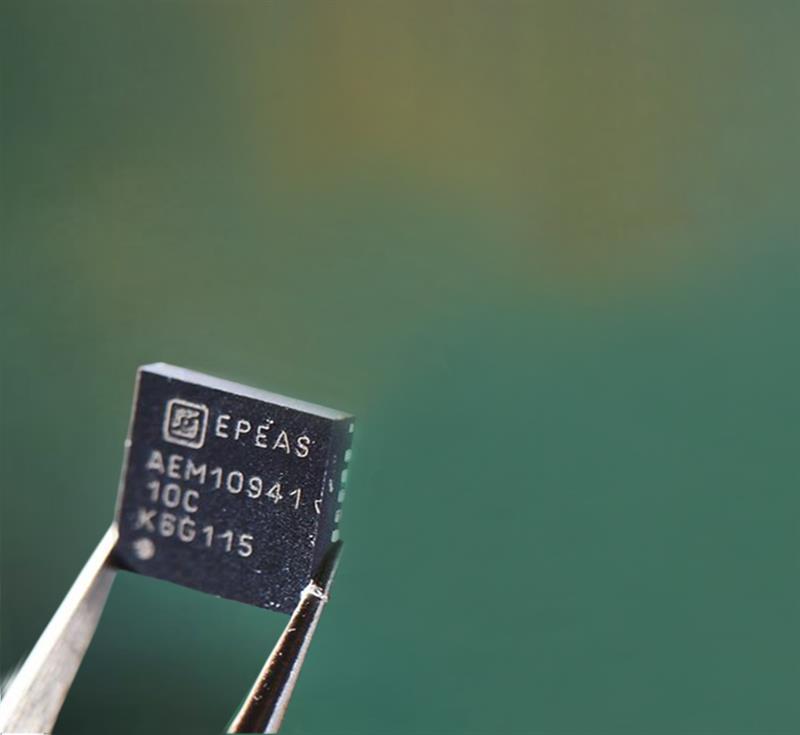 Above: An e-Peas AEM10941 power management IC for photovoltaic use cases

In relation to thermally-oriented energy harvesting, for example, this has allowed the institute’s thermoelectric generator (TEG) implementations to produce currents from just a few Kelvins of temperature difference (needing only a tiny 20mV start-up voltage), and at peak performance outputting up to 100µW of power per Kelvin.

With additional active rectifiers, built using MOSFETs instead of diodes, these TEGs even permit current to be drawn from negative thermal gradients.

e-Peas, a Belgian firm, that has gained considerable market traction with large scale deployments in numerous industrial sites, as well as success in livestock tracking applications, has developed a topology which sees self-oscillating loops incorporated into each of its AEM series power management ICs, to facilitate start-up at the earliest feasible stage (and eliminate the need for a gate driver approach).

These oscillating circuits operate alongside the main boost converter - so that when the power output gets to a level that is high enough, the boost converter takes over (thereby enabling more efficient operational performance to be achieved).

The setup means that energy can be drawn efficiently from the environment across a much more extensive range of input voltages - starting off at very low levels and carrying on all the way up to several orders of magnitude above this.

For instance, in a solar context an e-Peas IC can work with a photovoltaic cell that is generating a mere 3µW, but will also support multiple cells pumping out as much as 500mW of power.

In order that the system can respond to variations occurring in the environmental conditions, maximum power point tracking (MPPT) is applied on a continuous basis (usually at 5s intervals). This feature is easily configurable though, so that the end user can adjust the regularity to fit the particular system requirements.

NOWI Energy is a venture-backed enterprise that is focusing its attention on body-worn and IoT-driven solutions for scavenging minuscule amounts of energy, through incorporation into consumer and medical monitoring products.

It offers a comprehensive IC-based intelligent power management subsystem that is applicable to RF (including use of Wi-Fi signals), solar or thermal deployment.

This highly integrated subsystem takes up only a small amount of board space (12 square mm in total) as it doesn’t require inclusion of any inductor components (which also lowers the bill-of-materials costs) and calls for the addition of just one external capacitor.

The company estimates that it can reduce the board real estate that a conventional solution would occupy by a factor of at least 10 (often 20). The quick-acting MPPT has a settling time of less than 1s, and the efficiency of the boost converter is up to 90%. As well as selling hardware, NOWI is also licensing its IP to several companies in the consumer sector.

Anthony Quelen, Senior Analogue Designer at CEA-LETI, has been leading a research project that involves the conversion of on-going mechanical vibrations into electricity using an oscillating magnet placed within a coil, alongside a proprietary IC that features a real-time optimal input impedance generator and a unique boost architecture with no off-chip components needed.

As the continuous vibrations need to correspond to the natural frequency of the harvester coil, they must be of a steady and predicable nature - with the harvester parameters being set accordingly inside the IC (so that they exactly match requirements).

The complete solution is streamlined - comprising of just the harvester coil (which has approximately the same diameter as a 2 Euro coin), an energy storage reserve (namely a battery cell or supercapacitor) and the power management IC (which is fabricated using a standard CMOS process).

The need for external capacitor or inductor components has been totally removed.

“By working with partners, we now have a very effective prototype solution,” said Quelen. “The IC achieves more than twice the energy extraction figures from periodic vibrations that a full-bridge rectifier would and quadruples what can be taken from mechanical shocks.”

This equates to as much as 50mW of power generation, with overall efficiency levels climbing to 95.9%.

“The next phase is for us to license this technology to a power semiconductor manufacturer, so that it can get true commercial uptake.”

There is certainly a growing number of different ways via which energy can be drawn from the world that surrounds us - with each having its own innate merits, depending on the application scenario.

Likewise, numerous tactics are now being explored regarding how best to ensure wastage remains negligible and that every precious mW of available power is fully exploited.

Research institutes, university spin-outs and fledgling firms are all coming up with ingenious power management topologies that may well challenge what the established IDMs can offer.

Outlook 2021: Because every electron is sacred…

An amp for every occasion

Real-time digital exploration for every engineer