While silicon currently remains the material of choice of power devices, there is little headroom available to improve figures of merit such as on resistance and gate charge. However, there appears to be more room for manoeuvre with alternative materials and two such materials which are focusing the attention of device developers are silicon carbide (SiC) and gallium nitride (GaN).

Both are wide bandgap materials which not only allow power devices to operate at higher voltages, higher temperatures and higher frequencies, but also to reduce energy losses. Yet, despite both technologies having been in development for some time, there are few examples of SiC or GaN products in the market – even though the first such products appeared nearly a decade ago.

But as performance characteristics become more demanding, it might just be that a ‘tipping point’ is nearing for SiC, pushed by the space, weight and efficiency requirements of electric vehicles and hybrids and by some particular industrial applications.

Aly Mashaly is manager of the power systems department for Rohm Semiconductor. He noted two particular trends in the power sector and said requirements have increased dramatically. “There is the need for higher efficiency,” he contended. “This reduces the amount of energy lost in a system, improves performance and cuts operating costs. There is also the need for higher power density. By taking this approach, systems can be made smaller and energy consumption reduced.”

However, he added, silicon based power devices are struggling to meet these requirements and SiC based devices are now being used in a range of applications; not only industrial, but also automotive. “Rohm has two technologies which it can use for SiC MOSFETs – planar and trench – and Rohm is the only company which has trench technology in mass production.”

Part of the appeal of SiC comes from its physical properties. For example, where silicon has a breakdown electric field of 0.3MV/cm, SiC can withstand up to 2.8MV/cm. “Its internal resistance is also 100 times smaller than that of silicon,” Mashaly noted. “This means applications can handle the same level of current using a smaller chip – and this leads to smaller systems.”

Development of SiC based technology began at Rohm 16 years ago, said Mashaly. “While the first device appeared on the market in 2010, we are now broadening the portfolio.” 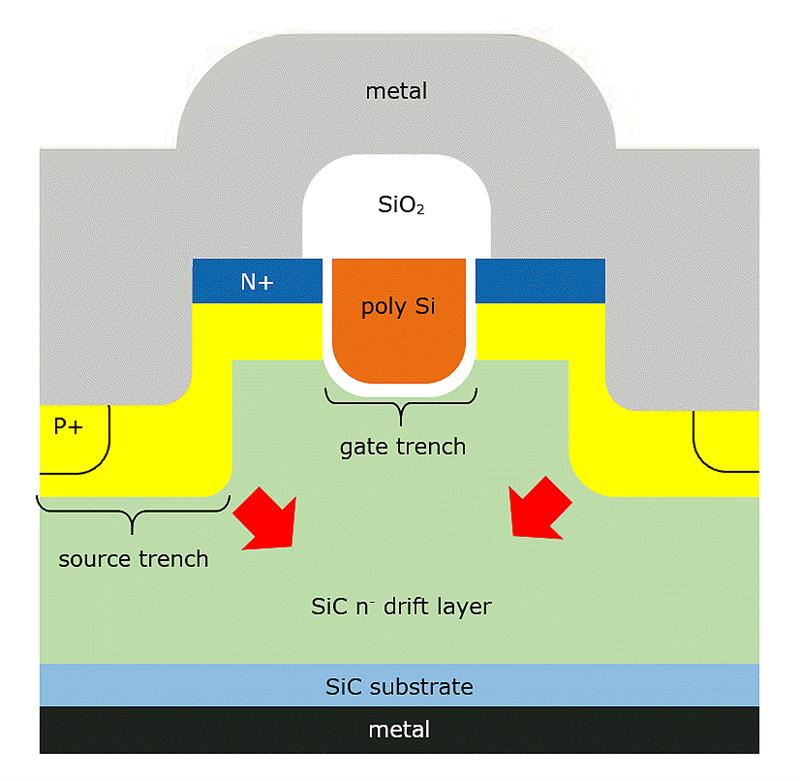 The company used last November’s electronica to unveil its third generation SiC MOSFET, featuring its double trench technology (see fig 1). Devices in the SCT3xxxKL range are said to reduce on resistance by 50% across the operating temperature range and input capacitance by 35%, when compared to a chip of the same size manufactured on a planar process. Their high speed switching performance also makes it possible to reduce the size of peripheral components, such as coils and capacitors.

Mashaly used a power control board as an example of the benefits which SiC devices can bring. When constructed from silicon IGBTs, the board weighs 7kg. Using SiC based components, weight is reduced to less than 1kg.

Mashaly has automotive and industrial applications in mind for SiC parts and so too does Infineon.

Mark Münzer is senior director of the company’s high power electric drive train business. “We’re still using silicon based devices in automotive applications, but we’re looking to transfer some of these to SiC.

Even so, we’ll still be developing silicon based solutions for the next generation of cars and to offer value. Silicon carbide will be the next good thing, but we have to find the appropriate entry points.”

One particular entry point which Infineon has identified is the on board charger in EV and hybrid vehicles. Not only does SiC bring value to this, it also translates into space savings through smaller passive components. But SiC won’t be available at the same price as silicon parts.”

Münzer believes SiC will be particularly appropriate to EVs. “It will allow companies to develop smaller devices with higher power densities, meeting some of the constraints posed by EVs. But these will be specific applications.”

Silicon carbide technology is being applied to low frequency inverters in EVs, but Münzer says that, as SiC technology develops, it will be able to address higher frequency applications, including boosters and on board chargers.

And this will allow EV developers to make trade offs. For example, the efficiency gains from SiC could either bring a 10% increase in range or allow the use of a battery which is 10% smaller. “The cross over point is about 40kWh,” Münzer said. 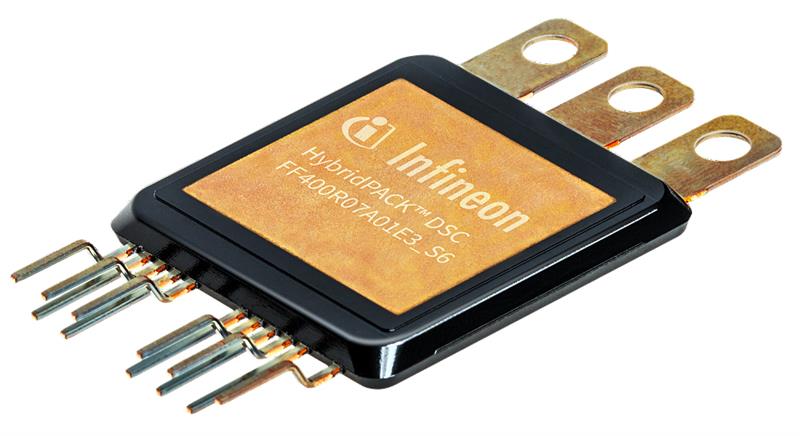 Looking to enable these applications, Infineon has developed the Double Sided Cooling (DSC) module (pictured right). Measuring 42 x 42.4 x 4.77mm, the modules are aimed at applications such as main inverters and generators with a typical power range of 40 to 50kW. “When you want to get products designed into drives,” Münzer pointed out, “you need to ensure there is full area contact on both sides of the package. This package brings a six fold increase in power cycling capacity and, with its non standard wirebond, it can operate in higher temperatures.”

Infineon also sees significant opportunities for SiC technology in industrial applications and launched in 2016 a range of 1200V SiC MOSFETs optimised for reliability and performance.

According to Münzer, Infineon has developed a trench technology for the devices. “We wanted the parts to have high reliability, coupled with higher performance. However, we needed to improve the gate oxide stability in order to get both – and found a way to do it.”

With dynamic losses said to be an order of magnitude lower than 1200V silicon IGBTs, the parts are initially suitable for applications such as photovoltaic inverters and uninterruptible power supplies, but the company says it will extend the range to include industrial drives. SiC MOSFET are also suitable for use with hard and resonant switching topologies like LLC and ZVS converters. In such applications, SiC MOSFETs can be used like an IGBT, with standard drivers.

The MOSFETs, compatible with the +15V/-5V voltages used to drive IGBTs, have threshold voltage of 4V and bring threshold voltage free on state characteristics. Threshold-free conduction brings with it the potential for a reduction in losses.

The first discrete 1200V CoolSiC MOSFETs have an on resistance of 45mΩ and are supplied in three and four pin TO-247 packages. The four pin variant incorporates an additional connection to the source, which can used as a reference potential for the gate driving voltage.

Rohm’s Mashaly pointed out that the company has full control over the SiC manufacturing process, as it makes its own SiC wafers. “They are not easy to make,” he noted. “There is a very thin drift layer and this has to be integrated on the substrate.”

While the initial stages are at temperatures in excess of 1500°C, the seeding process which results in the creation of wafers takes place at 400°C.

“We are making 4in wafers at the moment,” Mashaly concluded, “but we are looking to move to 6in wafers early in 2017.”