Robotics- A guide to sensor selection

With the rise of collaborative machines where do you start when it comes to selecting sensors for cobots? By Markus Lorenz.

Collaborative robots – 'cobots' have quickly become a familiar sight within an industrial automation deployment. Working alongside skilled human counterparts, they often take on the burden of repetitive and manually intensive tasks.

However, working within proximity to human colleagues, their movement needs to be extremely precise and predictable.

The industrial manufacturing landscape has transformed significantly over the past few years. Ten years ago, the German government began encouraging manufacturers to exploit new technologies and embrace digitalisation.

The widespread use of industrial robots started decades before. However, together the IIoT and Industry 4.0 enabled factory-wide machinery connectivity, performance monitoring, and predictive asset maintenance on a scale not previously possible.

With connected robots, the potential industrial applications expanded - see below. 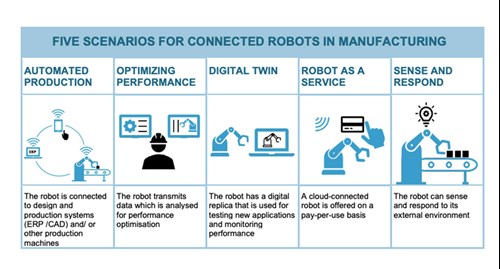 The abilities of industrial robots have advanced considerably, from single axis, single-function units into more complex multi-axis robots that have interchangeable grippers, manipulators, and effectors.

Today’s industrial robots are able to withstand the harsh and physically demanding environments that are experienced across the many different manufacturing processes. Their ability to continually perform repetitive and complex tasks precisely improves the overall operating effectiveness of any manufacturing function significantly.

As robotic systems and electronics technology evolved, researchers started investigating how programmers could train robots to work collaboratively alongside skilled human workers. The concept of a collaborative robot, or "cobot", was born and is gathering momentum. Below, the figure illustrates the shipments of collaborative robots alongside traditional industrial robots. 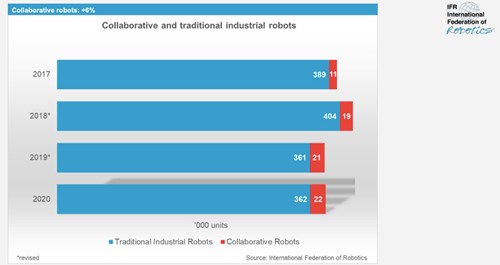 Cobot sales are growing at approximately 6% year on year. Although still considered in their infancy, the convenience and flexibility cobots provide make them suitable for many collaborative tasks.

Compared to traditional robots that typically operate surrounded by safety barriers, interlocks, and other protection features, a collaborative robot needs to work close to a human worker.

Cobots, like all robots, typically employ high-torque motors for agility and speed and having an operative working so close to a potentially dangerous item of automated machinery raises several functional safety issues. The technology used in a cobot continues to evolve, and the use of vision cameras and machine learning algorithms enable the cobot to sense the space around it.

Also, with their proximity to their co-worker, cobots should be more compact yet agile to allow flexibility of movement and more precise positioning.

There are three main categories of sensors used in robotic applications, position, force, and pressure. Alongside those, there may be additional types needed for specific tasks, such as temperature or liquid composition. Positional sensors are perhaps the most diverse, dividing into further subcategories, including angular, motion, and distance.

A cobot or robot's arm, for example, will employ many positional sensors in joints, flanges, limbs and arms, motors, and slip rings. They are also present in the grippers, tools, and end effectors, where you'll additionally find force, torque, and pressure sensors.

Accurate and reliable sensors are critical components; without them, the cobot control system could not function. Knowing precisely where the end effector is, for example, is crucial to calculating the series of angular movements necessary to reposition it.

One method of determining angular rotational position is by using a sensor that uses the magnetoresistance effect. Certain materials change their resistance properties when exposed to a magnetic field. Used in conjunction with a small magnet placed in a fixed position, such a sensor can accurately determine the rotation angle.

Another approach, and one that’s used by TDK, uses the tunnel magnetoresistance effect (TMR), a technique initially developed for hard disk recording heads. A TMR sensor element is composed of three distinct layers using thin-film processes. Compared with AMR and GMR, TMR yields a significantly more significant change in resistance value, up to 20 times, when exposed to a magnetic field. The figure below illustrates the sinusoidal change in resistance value according to the magnet's rotation. 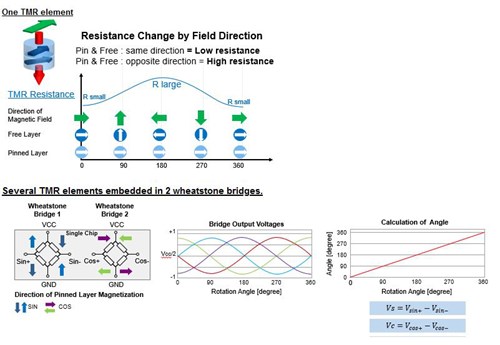 The TAS2141 and TAS2143 series of analogue output TMR sensors incorporates two TMR elements and two Wheatstone bridges in a compact TSSOP8 package and can accommodate a wide range of magnetic field strength, from 20 mT to 80 mT. The high resolution, highly stable sensors provide 360 degrees of angular measurement with a resolution better than 0.2 degrees, and can operate from – 40 °C to + 150 °C.

An application-specific IC (ASIC) provides a high-level output signal that directly connects to the host controller's analogue input without the need for a pre-amplifier. A four Wheatstone bridge series, the TAS414x family, is also available in a TSSOP16 package.

Contrinex Inductive and Photoelectric Sensors from Molex offer one of the smallest self-contained miniature sensors on the market, with a compact range of sensors that are ideal for proximity detection in collaborative robots.

They also use single-piece metal housing which makes them practically indestructible, and are compliant to IP67, 68, 69K and Ecolab, making them suitable for challenging factory floor environments.

With improved object detection and ASIC technology, these sensors can help to identify an object placed in the jaws of an effector or the proximity to a potential hazard.

Contrinex Photoelectric Sensors (Ecolab approved) use patented UV technology to detect transparent objects. These sensors ensure transparent object detection up to 1200.00mm range. They have a one-piece stainless steel construction, and are rated to IP68 and IP69K and sized from M8 to M30, the sensors allow sensing distances up to 40.00mm.

Miniature diffuse-mode photoelectric sensors from the Contrinex C23 Series are intended for industrial automation applications. Space constraints are accommodated without compromise, thanks to a maximum sensing range of 3.00 to 1,500.00mm.

Force sensing is an essential requirement for effectors and grippers. A cobot picking up any object should only apply enough force to hold it safely without damaging the item or the gripper. Some things are easily broken, dented, or bent by using too much pressure. Also, the continued use of excessive force may result in premature wear of the effector's joints and actuators.

Miniature micro force sensors such as Honeywell's FMA series can be used for integrating into effectors and grippers so they can emulate the dexterity of human fingers. The FMA force sensor series measures just 5 mm x 5 mm, has an integrated ASIC providing either an I2C or SPI digital output, and consumes only 14 mW from a single 3.3 VDC or 5.0 VDC supply.

Another distance detection method is used for the robot to detect longer distances, for example to reduce movement speed before the gripper gets closer to a work task. One extremely reliable sensor technology uses an ultrasonic transmitter and receiver in a single unit.

An example is the EPCOS / TDK ultrasonic time of flight (TOF) sensor module. The sensor operates at 75 kHz and measures from 15 cm to 200 cm the time-of-flight value and communicates to a host microcontroller using a 3-wire interface. Below 15cm only present detection is possible. The figure below illustrates the sensor's operation. 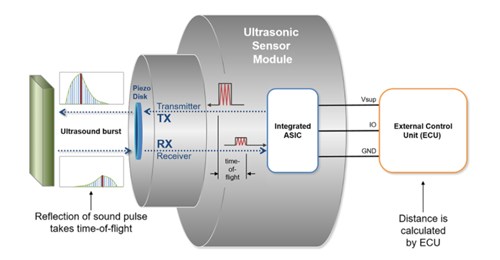 In this article we’ve sought to highlight some of the sensor technologies that are available to make cobots safe, reliable, and capable of achieving repeatable positioning.

Robotics Week - A Call to Arms