On its journey from the Blackberry to the iPhone, the smartphone has changed beyond recognition.

Today there may be five or more radios in a single phone, all competing for the crowded spectrum available. As a result, single-band radios have been overwhelmed with the capacity demanded by users as they expect data-rich content, demanding wider bandwidth in offices, vehicles and homes.

Multi-band radios are selected in designs because they make more spectrum bandwidth accessible. The landscape of 5G is likely to be a ‘shared space’ with 4G networks, and one where they jointly access legacy and new bands, including the sub-1GHz band which is used for voice, mobile broadband and the IoT. The mid-band, 1GHz to 2.6GHz, was used by 2G, 3G then 4G and will evolve for 5G. It offers better wide area and indoor coverage than the higher 3.5GHz to 6GHz bandwidth which will be exploited by 5G technology for higher throughput at low latencies. This will enable mission-critical connected applications like autonomous vehicles.

Optimising form factor and power consumption will be a significant consideration in multi-band radios used in emerging 5G applications.
RF designers will have to balance signal bandwidth with power consumption, both of which impact the overall size of the radio.

The ability of multi-band radios to be reconfigured allows them to access the sub-6GHz (i.e. 1GHz to 6GHz) spectrum for broader coverage without size or power penalties or, in many cases, the systems bill of materials.

Companies like Skyworks have developed multi-band front-end modules. One example is the SKY680xx IoT series, which integrates multiple RF front-end components. The SKY68020-11 is a hybrid, multi-band, multi-chip RF front-end module that supports cellular LTE-M/NB-IoT transceivers. It uses Smart Biasing to control power through the MIPI (Mobile Industry Processor Interface) by programming reduced bias current for lower gain states, allowing the transceiver output power to be adjusted according to the total output power required in a particular application.

The wide bandwidth demands of 5G can be met by moving frequency translation and filtering from the analogue to the digital domain. Two RF converters that are part of this wave of digitisation are the AD9081/AD9082 mixed signal RF converters, introduced by Analog Devices. They have been engineered for developers to install multi-band radios in the same footprint as single-band ones, to increase call capacity three-fold, compared with the call capacity available in today’s 4G LTE base stations, says the company.

The integrated RF converters are part of the company’s MxFE (Mixed signal front-end) platform. This is targeted primarily at multi-band radios to enable engineers to configure and control the radio through software.

The MxFE RF converters have a 1.2GHz channel bandwidth and are based on a 28nm CMOS process. The larger AD9081 has four transmit channels and four receive channels (i.e. four 16-bit, 12Gsps DACs and four 12-bit, 4Gsps ADCs). Two of the four receive channels can be used as observation receivers to inherently support digital pre-distortion, for wireless communications transmissions.

The AD9082 has two 12-bit 6Gsps ADCs and four 12Gsps 16-bit DACs. Both achieve up to 2.4GHz instantaneous signal bandwidth to reduce the number of frequency translation stages. They are both supplied in a thermally enhanced 324-BGA. Analog Devices reports that the level of integration results in a 60% reduction in PCB area, compared to alternative devices.

“Software configuration brings flexibility,” says Aziz. “Having all the control in the software means an engineer does not have to use multiple chips for different bands, but can use the same hardware,” he adds. He also pointed out the benefits for bill of materials and time to market. “There is less hardware [needed] - filters for example - these functions can be done in software and the digital domain.” Another advantage Aziz notes is that software also simplifies certification as hardware requires particular certification in different geographical regions.

The benefits of integration are significant for multi-band radios, continues Aziz. “In terms of size, weight and power you gain because you are not planning for individual components in a signal chain, like a mixer or filters, rather you have them available in a single chip and the rest of the functionality is available in software,” he explains.

Material advances
Other areas of research are focused on deep submicron lithography to integrate more digital circuitry on a die. Integrating functions, such as digital pre-distortion and removing it from the power-hungry FPGA logic, will reduce overall system power and the size of the radio.

A key factor in the advance of RF design is refining CMOS processes. The gate length of a CMOS transistor is directly related to the speed, size and power requirements of the chip. The smaller the gates, the faster they become and less power and space they require, allowing for more on-chip digital signal processing without impacting the power budget. 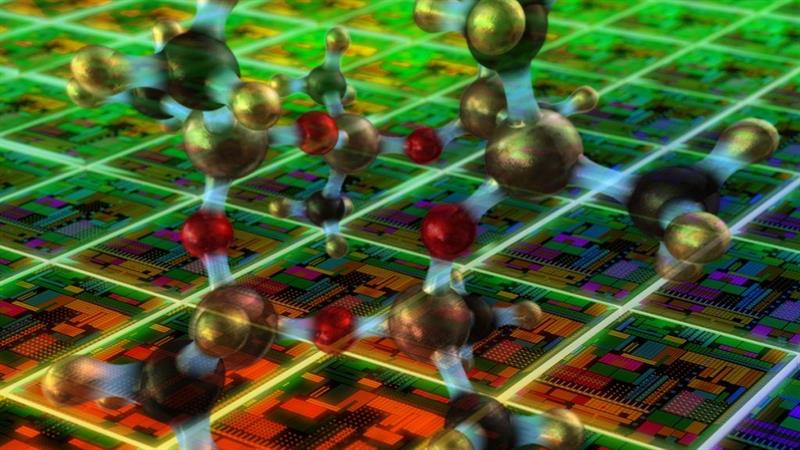 Above: The structure of MST (Picture Credit: Atomera)

A significant development is a proprietary technique to improve the performance of transistors by up to 50%.

Atomera, which patented Mears Silicon Technology (MST), a quantum-engineered material, has enhanced it with a smart doping profile. The company reported that the resulting MST SP technology reduced channel on-resistance on 5V analogue transistors by up to 50%. The company says that it can be applied to other silicon devices, including planar CMOS chips.

MST SP has improved carrier mobility to lower on-resistance compared with the original version and dopant profile engineering controls short channel effects for low loss switching and good isolation. The result is that switching is not affected by voltage swings in the signal path.

The company reports that, working with a foundry partner, it has re-engineered a 5V NMOS switch for 50% less on-resistance without affecting characteristics of the device in power management ICs and other bipolar-CMOS-DMOS (BCD) mixed-signal devices,
MST is an ultra-thin film of semiconductor, re-engineered to incorporate non-semiconductor material to create a silicon lattice which has control the flow of the current to improve performance and efficiency. The single crystal, silicon-on-silicon technology enables RF and mixed-signal devices (as well as microprocessors, logic and memory ICs) to run at lower power levels and reduce the die area.

It reduces gate leakage – by up to as much as 50%, says the company - by impeding unwanted current flow in the vertical direction. This is particularly advantageous at lower process geometries, when gate leakage increases.

In RF switching, MST was shown to improve the drive current of RF-Silicon on Insulator (RF-SOI) process technology with a lower on resistance (Ron) at the same breakdown voltage and reduced off capacitance (Coff), boosting RF switching performance.