“Predictive maintenance has been proven to be efficient in reducing maintenance costs by 30%, eliminating 75% of all breakdowns and even reducing energy consumption by up to 20%,” said Saar Yoskovitz, CEO of PdM company Augury.

Maintenance costs are reduced because intervention occurs only when needed, cutting production downtime and increasing operational efficiency. By monitoring each machine’s real-time condition, technicians can be alerted to unusual behaviour or troughs in performance, which could then be resolved more quickly.

Until now, however, PdM has been relatively inaccessible to most manufacturers because of its high cost. “Current solutions cost more than $20,000, just for the hardware,” said Yoskovitz – making it accessible to only high end applications, such as gas turbines and jet engines.

According to Yoskovitz, only 12% of commercial facilities are using PdM. “Our goal is to bring predictive maintenance to facilities that currently cannot afford it.”

“With a car, you can tell from the sound when something isn’t functioning correctly. We do the same, but for other types of machines,” Yoskovitz explained. “In a previous employment, my co-founder Gal Shaul, a software engineer, was sent to a couple of sites to diagnose why a large machine with several fans had problems. As soon as he entered the room, he could hear the fan was clogged. 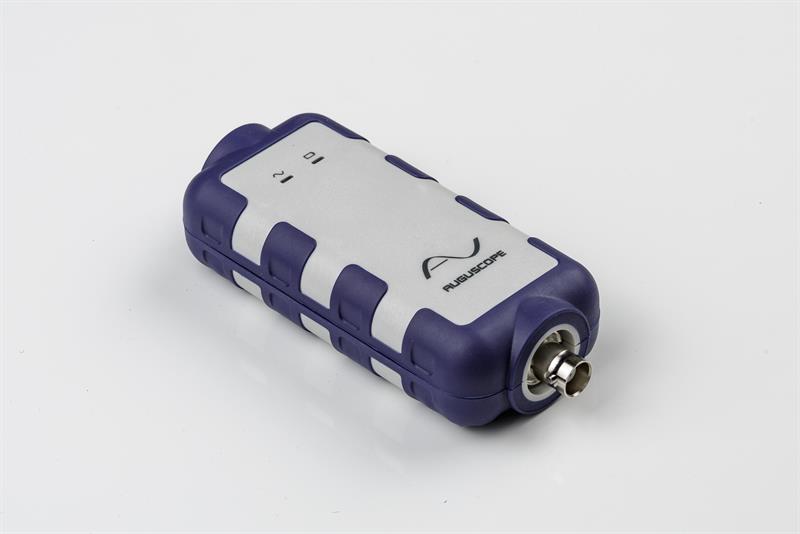 PdM techniques are not limited to acoustic and vibration analysis, however. Other available techniques include corona detection, infrared and oil analysis.

Coronas – electrical discharges caused by the ionisation of air surrounding an electrically charged conductor – generate corrosive gases which can degrade nearby materials. Studying corona levels in the air could therefore prevent both short- and long-term malfunction.

Augury’s first product is a portable diagnostic tool – the Auguscope. Acoustic signals are collected from ultrasonic vibration sensors and stored on the Auguscope. The technician’s iPhone or Android device can then relay this data to the cloud, where advanced machine learning algorithms are applied to the signals in real time. The results are then returned to the technician.

“Technicians can easily take their smartphone from one machine to the other, touch the machine and get instantaneous results. It tells them exactly what’s wrong,” asserts Yoskovitz. “The benefit of this system is that every technician in-house can manage and have access to the tool – and it’s very easy to set up.”

Augury also has a continuous monitoring solution in which up to four sensors per machine can be connected to a gateway via Wi-Fi. Alternatively, multiple machines can be linked to the gateway. Because machine condition is monitored continuously, alerts can be given immediately if a problem is detected.

Once the data collected, there are three stages to the analysis. The first is an anomaly detection, or trend analysis, where the new recording is compared to all the previous recordings to see if there is any change.

The second step is fault detection, where the machine learning algorithm is used to compare this machine to all the other machines already seen.

The third step is expert analysis; Augury has an in house vibration expert available to explain the reasoning behind the alerts sent by the device.

According to Yoskovitz, as well as being expensive, current solutions only offer the raw data, so the user then needs to bring in an expert to analyse it and diagnose the machines, which most manufacturers cannot afford at a large scale.

“Before Augury, nobody had done automated mechanical diagnostics based on vibration ultrasound and other types of sensors,” claimed Yoskovitz. “Over the last year or so, younger companies have popped up and are trying to build on these capabilities. Each is going after a different market at a different angle.

“We come from the machine side; that marries traditional vibration analysis and predictive maintenance – mechanical engineers with machine learning algorithm developers.

“Other companies are trying to throw generic machine learning algorithms at the problem. We want to understand what the mechanical malfunction is, understand how it appears in the vibration and then how we can design the algorithms that detect it.”

There were several challenges, however, in achieving this. Four to five years ago, when the company started, it was a challenge to connect the hardware to a smartphone to collect the data. “Today, however, we can sample ultrasound using the smartphone’s USB.”

The second challenge was accumulating the data to generate the malfunction dictionary, which enabled the developers to build the machine learning algorithms. Augury collected data in more than 1000 facilities across the US and Canada – more than 20,000 machines.

Augury’s solution is currently diagnosing pumps, fans, and chillers or compressors in commercial and industrial facilities. “Our goal is to eventually be inside everything that has moving parts, including your washing machine, refrigerator – even your car.”

Yoskovitz imagines PdM capabilities one day being embedded by manufacturers within the machine. “We are currently working with OEMs to achieve this. So one day, pumps may come prebuilt with on board diagnostics and continuous monitoring.”

Augury is also working with global insurance company Munich Re to work on improving premiums for manufacturers possessing PdM solutions as they lower the risk of malfunctions. PdM may soon therefore become a low cost solution available to all.

Making the most of legacy equipment

Siemens and Google Cloud to cooperate on AI-based manufacturing solutions