High-Speed Network Solutions for the Next Generation of Connected Vehicles

In response to growing data acquisition and computational needs, in-vehicle networks are going to have to go through some radical changes.

The inclusion of ever greater numbers of on-board sensors, combined with uptake of a plethora of new data-intensive multimedia technologies, will set major challenges for the networking hardware incorporated into our cars. There will be implications in terms of supporting adequate bandwidth, as well as cabling weight, system complexity and overall cost.

Back in the 1980s, the average car had just a handful of electronic control units (ECUs), while today there can easily be well over a hundred present. The advent of advanced driver assistance systems (ADAS) and in-vehicle infotainment (IVI) have already led to a substantial ramp up in the data overheads of vehicle models. At first this was mainly seen in luxury models, but it has now proliferated further down into medium end and economy models too. Figure 1 gives an indication of the scope of functionality that is now being expected. 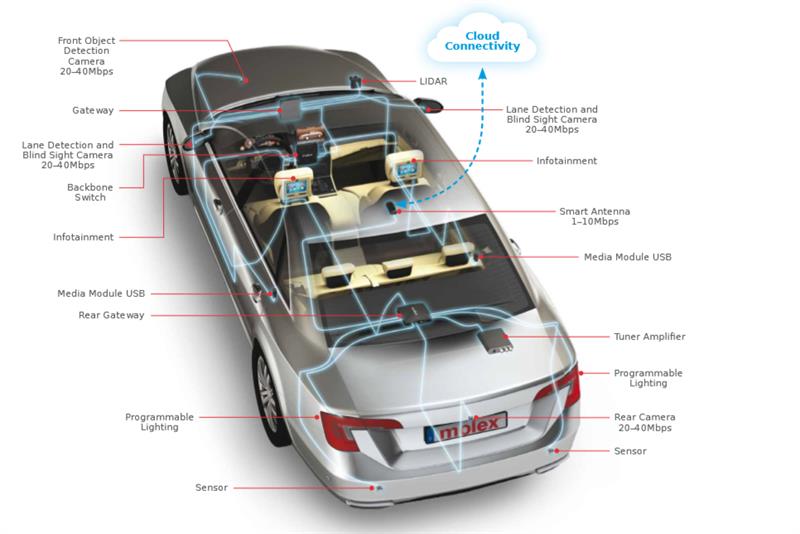 The migration towards semi-autonomous driving, with a much greater breadth of features consequently being added to the ADAS capabilities initially available, means that this is still only the beginning. A vast range of new functionalities will soon be required - in particular increasing use of cameras (featuring heightened pixel resolutions), plus other forms of imaging technology (such as LiDAR) and various traffic-sign recognition mechanisms. In addition to such developments, there are various wireless protocols which will be used for providing both vehicle-to-vehicle (V2V) and vehicle-to-infrastructure (V2I) connectivity that also need to be taken into account. All of these will have heavy data demands on the supporting communications network.

Many automotive systems are of course time-critical. The effects of improper timing can lead to potentially life-threatening situations. Vehicle stability control and collision avoidance are both classic examples of where the timeliness of information transmission is of prime importance to ensuring the safety of passengers and other road users.

It should also be noted that the cable harnessing currently constitutes the second heaviest part of a modern vehicle (after the chassis itself) and is among the most expensive too. Finding a way to implement weight and cost savings is therefore essential, as it will lead to a reduction in the vehicle’s price tag and significant improvements its fuel economy being realised. This will thereby increase its appeal to customers and help it to comply with increasingly stringent environmental legislation. Automotive engineers recognise that there are huge operational advantages to be gained if data communication infrastructure can be made more streamlined. Ideally, this will be centred around a single all-encompassing protocol (although this will admittedly take time to actually happen). Because of the accelerated data rates that it can deliver and its deterministic operation, Ethernet is emerging as the main protocol for future in-vehicle networking activity.

The Rise of Automotive Ethernet

Ethernet is a communication bus that has been the stalwart of the information technology world for nearly 3 decades. In the last few years, for the reasons already described, it has started to witness strong design uptake within the global automobile industry too - with support of speeds up to 10Gbps (and provision to go higher than this in the future). It offers a lightweight, economical and scalable solution, through the use of single unshielded twisted-pair (UTP) cabling, which makes it very attractive from an automotive standpoint.

As well as operating at elevated speeds and respecting the cost, space and weight constraints already outlined, another of Ethernet’s key attributes is the fact that it is a mature and stable technology. It benefits from the presence of a wide range of system and component suppliers with longstanding expertise built up by serving the enterprise data communication and factory automation business sectors. Numerous security features and authentication algorithms have been developed over the years for Ethernet because of its widespread use in data centre and industrial environments. This has given engineers something of a head start when it comes to meeting the exacting demands that relate to automotive networking.

In other respects, automotive Ethernet is quite distinct however. It has to deal with far harsher surroundings than conventional Ethernet implementations would - such as high temperature levels and exposure to electro-magnetic interference (EMI). In addition, it must also be robust enough to not be affected by the influence of vibration, shock or high degrees of humidity. 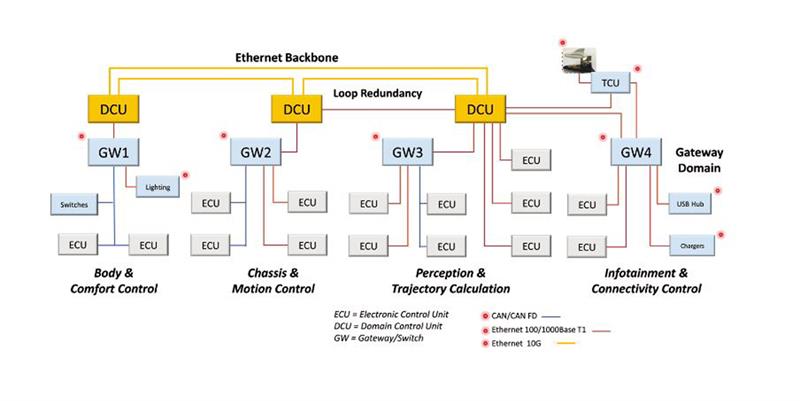 Any in-vehicle network system that is based on Ethernet technology will need to employ automotive-grade gateways with access to cloud connectivity platforms that integrate various hardware and software elements with legacy automotive protocols (such as LIN, CAN, FlexRay, LVDS, etc.). Molex has developed multi-Gigabit technologies in order to keep data flowing smoothly, safely and securely within vehicles and when interfacing with the cloud, thus avoiding the build up of network bottlenecks. 10Gbps Ethernet network systems have subsequently been demonstrated which can offer the end-to-end V2V/V2I connectivity needed to cope with huge quantities of captured sensor data while simultaneously delivering 4K video content to the vehicle’s back seat displays. These systems are made up of Molex Ethernet gateways (with built-in legacy protocol support - such as CAN, LIN, LVDS, etc.) and media modules, along with IP67/IP69K-rated, EMI-protected connectors and cables.

As a result of increased vehicle connectivity, potential attack surfaces and entry points are going to be opened up. The security algorithms employed by the Molex system are managed by a Blackberry QNX suite. This offers a microkernel architecture with Certicom elliptic curve cryptographic (ECC) techniques for communications between on-board systems and connected cloud services. The sophisticated public-key service that is employed ensures that secure and authenticated communication is maintained between all the constituent ECUs and peripherals within the network, and thus safeguards against the potential threat of denial of service (DoS) attacks or another kind of security breach.

Current automotive network architectures simply cannot keep up with the huge demands that are now being placed upon them. Traditional protocols are already struggling to meet the bandwidth requirements of the multitude of sensors and sub-systems needed for ADAS and IVI. As we move to greater vehicle autonomy, their shortfalls will become even more apparent. Given that the camera, radar and LiDAR functions will generate much larger amounts of data, a considerable proportion of which will need to be responded to in real time, Ethernet is now recognised as the best way forward.

The development of autonomous driving clearly needs a new architecture to support rising bandwidth requirements caused by the ramp up in sensor resolutions and increased vehicle connectivity. The redundancy of all critical components and sub-systems will also be necessary to ensure the ongoing safety of vehicle occupants. The end-to-end 10Gbps Ethernet network platforms that Molex is now demonstrating are able to showcase the company’s comprehensive product portfolio targeted directly at the new breed of connected cars which manufacturers are now looking to develop.

The future of connected mobility