Cover Story: Five years after the launch of a strategy document, is plastic still fantastic?

At the end of 2009, Lord Mandelson, then Secretary of State for Business, Innovation and Skills, launched a strategy document that was intended to help UK industry get a jump on the rest of the world when it came to plastic electronics.

Speaking exclusively at the time to New Electronics, he said: "Many parts of the embryonic supply chain are present in the UK and, together with recent investments, this puts us in a strong position to develop new products and exploit the commercial value of the technology. The vision within our new strategy is for the UK to build on these foundations and be a world leader as the markets develop."

There was a good reason why the Government of the day had its eyes on plastic electronics – it believed the market would be worth $120billion a year by 2020 and wanted a good share of that to come the UK's way. The document – Plastic Electronics: A UK strategy for success – was intended to point the way forward.

Yet according to market researcher IDTechEx, demand for plastic electronics hasn't grown quite as anticipated. Even so, the sector is expected to generate around $75bn in 2025; there is much business to be won for UK companies.

However, has Lord Mandelson's document lived up to expectations and where is plastic electronics headed?

One of those involved with the development of the plastic electronics strategy document was Adrian Geisow – at the time, a senior researcher at HP Labs in Bristol. He said: "There were many different kinds of opportunity, but we needed to work out how we could give the UK a better share of what was going on. The strategy document was an initial attempt to say this is important area, it needs to be funded. Can we help grow a vibrant industry?"

Asked whether he thought the strategy document had made a difference, he said: "It has accomplished a reasonable percentage of what was expected. It has brought people together; one of the main aims was to make the UK's plastic electronics sector more coherent. Before, there were lots of different groups."

Jon Helliwell, director of printable electronics at the Centre for Process Innovation (CPI), said there has been a general move towards integrated components and capabilities which were the focus of attention when the Plastic Electronics strategy was launched. "Today, it's about understanding that industry has problems and is looking for answers – and printed electronics allows companies to do things differently. Companies want solutions, but there has been an inevitable move away from developing technology and components towards the approach which asks 'what we can do?' and 'how can we integrate?'"

Helliwell believes that plastic or printable electronics is not an end in itself; rather, it's an enabling technology. "It's a way that allows large area substrates to be created," he noted, "that you can't get using a conventional approach. But there are still some barriers to its application."

He gave printed OLEDs as an example. "Glass is a fantastic substrate and barrier material for making displays, but when you move to a plastic substrate, it becomes more difficult because the barrier performance isn't good enough for the applications for which the market is looking."

One of the issues which Helliwell sees is the belief that plastic electronics based products should have a similar lifetime to those produced using conventional processes.

"Take Polyphotonix for example," he suggested. "It has developed an application for OLED technology in the treatment of diabetes." The product is the Noctura 400 Sleep Mask. It has been designed to be worn at night, delivering a precise dose of light therapy while the patient is asleep. But the device is disposable.

"What's interesting with this device," Helliwell continued, "is that it doesn't require the OLEDs to have a lifetime of two or three years, because the product itself only has a limited lifetime."

He noted that Polyphotonix' had a printed solution in its road map because the product lifetime was comparable with the state of printed electronics technology. "Road maps are important," he accepted, "but companies need to be able to realise value at each point along that road map.

Geisow also accepted there are issues with the supply chain. "When any technology is new, the supply chain is always a problem. It's like silicon; in the early days, every company was developing its own technology and building its own fab. But then a common technology developed and the industry took off. I think the same thing will happen with plastic electronics, but it will take time."

FlexEnable – created following the separation of Plastic Logic's technology and manufacturing operations – has a particular interest in developing plastic electronics applications. It claims its technology will allow product developers to create 'truly flexible and cost effective' electronics over large and small surfaces.

Indro Mukerjee, the company's chairman, asserted the technology in general is ready for use. "Flexible electronics technology works – it's proven." But he knows that just because a technology is ready, it isn't always applied immediately.

"There is a gestation period through which every disruptive technology passes on its way from the lab to the market. Hermann Hauser says it's 10 to 15 years and that's how it is. It's normal."

Mukerjee also agrees with the issues around the supply chain. "The UK needs to get its act together," he warned. "Today, the plastics electronics industry can be seen as a collection of islands trying to do their own thing. But the UK needs supply chains for particular industries – automotive and aerospace, for example. For consumer applications, it will be necessary to link with Asian companies." 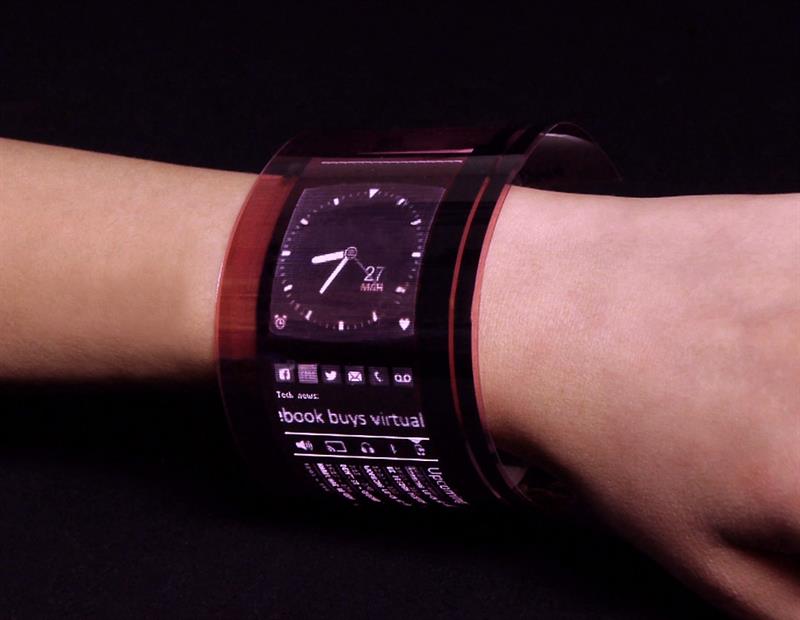 Geisow thinks one reason for the issues with the supply chain is that applications are still evolving. "If you want to do smart packaging with a few simple things, then a lot of the things are there. If you want to print an area of transistors, that's there – but it isn't a 'no brainer'. But if you want to produce something like a display, that's different to packaging and you may end up being in a number of supply chains."

One company interested in printing transistors is PragmatIC Printing. Chief executive Scott White sees two markets emerging for plastic electronics. "One is for new applications enabled by novel form factors. These take time to become real markets and there is a lot of experimentation with product concepts, which are evolving into pilot scale production and, hopefully, mass manufacture.

"The other category is silicon replacement, where it makes sense. At the low end, plastic electronics can be used when silicon is not cost effective or where the functionality of silicon is too high."

He said he is already seeing applications where flexible technology is being used because it has the right characteristics. "Take RFID/NFC," he said. "It's an established market and it makes sense to tag items of a certain value – these tags need to be very low cost and integrated. But RFID is not the most compelling application."

Helliwell also used RFID as an illustration. "You could get an RFID/NFC antenna stamped out, but we have people coming to us wanting to investigate printed solutions – not only the antenna, but also using printable electronics in combination with silicon.

"We've also worked with a leading developer whose product was based on conventional electronics, but which had a problem. We helped solve that problem by giving it a printed component on a flexible substrate."

Helliwell answered the same question in a slightly different way. "Will it work? Do we know it will work? How do we get it to work in such a way that we can manufacture with it? These questions have moved the focus on to understanding the plastic electronics supply chain.

"We have worked with PragmatIC Printing, which came to us and said that it thought it could use one of our tool sets for a particular product line. It was a useful collaboration for both of us."

Will printed electronics develop in a fashion similar to how Moore's Law drove silicon? "Yes," said White. "We have a version mapped out and have shown that we can achieve features of less than 100nm, which opens the door for plastic electronics devices which can support GHz frequencies. While it's not in production, we know how to do it. We're not going to compete with billion transistor silicon devices, but it might be ideal way to make a processor for an IoT application."

So what needs to be done? Helliwell says the UK still has leading edge capability, but hasn't demonstrated that supply chains are in place.

White noted: "We need a UK supply chain that can address global markets. We have the pieces, it's just joining them together in the right way."

Geisow: "We need to encourage more manufacture of components in the UK, but that's challenging because it needs investment."

Mukerjee: "It needs a national strategy, because it's all about the supply chain."

And are we where the plastics electronics strategy expected us to be today? Geisow: "It has taken longer and more money than people had hoped, but organic semiconductors, for example, are ahead of the game. The problem is developers don't know what to do with them."

White's conclusion? "Companies need to think about what they can do with the tools and components available – they need to know what is feasible and what isn't.

After 50 years of instrumentation development, is it time for a rethink?

Plastic Electronics - Rolling out a strategy