Atoms generally whizz around with very high levels of energy – and it is this degree of activity that allows us to use the concept of temperature. When atoms have very low energy levels, they move much more slowly and we equate this to a very low temperature. Extrapolating, atoms stop moving at absolute zero.

But what if you could ‘cool’ atoms to a temperature approaching absolute zero, but without involving significant amounts of cryogenics? It’s a concept which doesn’t seem feasible, but is something that is being achieved around the world. The trick is to use lasers.

Professor Kai Bongs is director of the UK National Quantum Technology Hub in Sensors and Metrology – established as part of a £270million investment in the UK National Quantum Technologies Programme. He said: “What’s behind cold atoms is the ability to have atomic particles under precise control. When you can do that, you can observe them and their internal states. What we are talking about when we use the term ‘cold atoms’ is atoms which are slow and in a well known position.”

And getting atoms under control means you can use them to measure something. “Using particles to measure something is a known concept,” said Prof Bongs. “If you can replace particles with atoms – which are always the same – you don’t have to worry about things like centre of mass and reflections.”

So how do you cool atoms to almost absolute zero? The answer is to use an approach called ‘optical molasses or laser cooling’. “Atoms have internal energy levels,” Prof Bongs explained, “and will absorb photons at certain frequencies. When this happens, the atom will not only absorb the photon’s energy, but also some of its momentum. This means it changes its velocity.”

But the change in velocity is only slight. “For rubidium atoms,” Prof Bongs continued, “the transition line is at 780nm. When a photon is absorbed, the atom changes its velocity by 6mm/s.”

The photons required to cool the atoms are generated by lasers. “If you put atoms between two laser beams,” he said, “and tune the laser’s frequency to be slightly less than the atom’s resonant frequency, the atoms will scatter a little. If they move to the left, say, you will see a Doppler effect; the atom will see the left hand laser at a higher frequency and closer to its resonance, so there will be more scatter. The right hand laser will shift to a lower frequency, so there will be less scatter. The enhanced scatter from the opposing laser beam will slow the atoms.

“If you then put atoms in crossing laser beams coming from all directions, there will always be more photons slowing the atoms – and that’s what we call optical molasses.”

Prof Bongs said the concept of optical molasses was developed about 30 years ago and won the Nobel Prize in Physics in 1997 for the development of ‘methods to cool and trap atoms with laser light’.

“At that time,” Prof Bongs contended, “physics was in decline and people believed that ‘everything had been done’. Then laser cooling came along and we found that atoms could be brought under control and ‘played with’.

“We then started to cool them further in order to approach the Heisenberg uncertainty limit. That work earned a Nobel Prize in Physics in 2001.” The citation for that award noted ‘the achievement of Bose-Einstein condensation’. “It’s an easy concept,” Prof Bongs observed, “and that’s what many Nobel Prizes are about.”

But he also noted that the key problem is to get the concept to work. “Controlling the lasers is a challenge, but you also need a good vacuum chamber. The bandwidth of rubidium atoms is 6MHz, but the lasers need to have a frequency of 1014Hz. In absolute terms,” he continued, “the laser needs to be accurate to one part per billion. That’s quite a challenge and is where much of the effort goes; it’s demanding to get lasers to behave.”

Once the atoms have been cooled, they could be put into superposition, where they travel in opposite directions around a loop. The interference pattern generated allows you to sense rotation. “Superposition uses an electron cloud to oscillate at a well defined frequency, much like an atomic clock,” Prof Bongs explained, pictured left. “But the atoms could also be sensitive to magnetic fields, gravitational rotation and frequency.”

One of the first demonstrations of atomic interferometry came in the early 1990s. “We’re now working on precision sensors,” Prof Bongs said. “After about 25 years, it’s the right time to get something out there.”

Five areas are being explored at the UK National Quantum Technology Hub in Sensors and Metrology, based at the University of Birmingham: clocks; rotation sensors; magnetic sensors; gravity sensors; and quantum imaging. According to the Hub, its strategy is to develop practical prototypes and demonstrators for each sensor technology. The University’s lead industrial partner is Teledyne e2v, which has invested ‘several million’ in the projects, according to group chief technology officer Trevor Cross. “Cold atoms are a new technology platform for e2v, where we see opportunities in space based scientific instrumentation, precision timing modules and subsystems for telecoms, defence and space applications.”

All five areas are underpinned by cooling atoms. Once that is done, tailored laser or microwave pulses are used to create superposition states, which are recombined after some measurement time to create interference. By using different pulses, laser geometries and traps, different measurements can be made. For example, by separating the paths vertically, or so they enclose an area, allows gravity and rotation to be measured respectively. Superposing different energy states allows magnetic fields or time to be determined.

Prof Bongs said the Hub is picking up on earlier work on quantum sensors undertaken in the UK. “What’s different is that our work is applications oriented,” he said. “Our ‘USP’ is not to look for the utmost precision; rather, it’s how we can make the sensors useful.”

One area being looked at with interest is gravity sensing. “The University of Birmingham has a long term relationship with civil engineering and surveying,” Prof Bongs observed, “and has been running a large project in which it’s been ‘assessing the underworld’. In the project, we’ve been using off the shelf components to look into the ground – much like ground penetrating radar – and we’re excited about getting a different view.”

That different view to which Prof Bongs alluded could enable new applications. “Gravity doesn’t react to EM interference, for example, and it can look through steel reinforced concrete.”

As part of the research, a brown field site was surveyed using a gravity sensor. “We learned it took 10 minutes per measurement. Potential users don’t want a better sensor; what limits them is measuring. Earlier sensors only used one measurement axis, which had to be aligned precisely – and that takes a long time.”

A further complication is ground vibration. “Even from waves hitting the shore, no matter how far inland you are,” said Prof Bongs. “It could be a 0.33Hz factor and, if you can’t distinguish acceleration from gravity, you have to leave the sensor for some time to average out and it can be several minutes before you get an improvement.

“That experience triggered us to change the way that measurement was done.”

That approach is called a gravitational gradient sensor. “What this does is to look at two clouds of atoms at different heights,” Prof Bongs explained. “Any vibration noise is suppressed because it’s a common mode effect. The sensor can be aligned to within 1° and is much easier to use.”

Using gravity sensors to look into the ground could enable objects much smaller than 1m to be detected at depths of 10m or so. Potential applications include detecting sinkholes and cavities, as well as the location and assessment of infrastructure.

“We’re hoping to get the insurance industry interested,” said Prof Bongs. “They need to know what parts of the world might see an earthquake, for example, and it might result in better risk models.”

Discussions have also taken place with the oil and gas and minerals industry. “It’s early days,” said Prof Bongs, “but gravity sensors could allow them to work out where to do more expensive seismic surveys.” 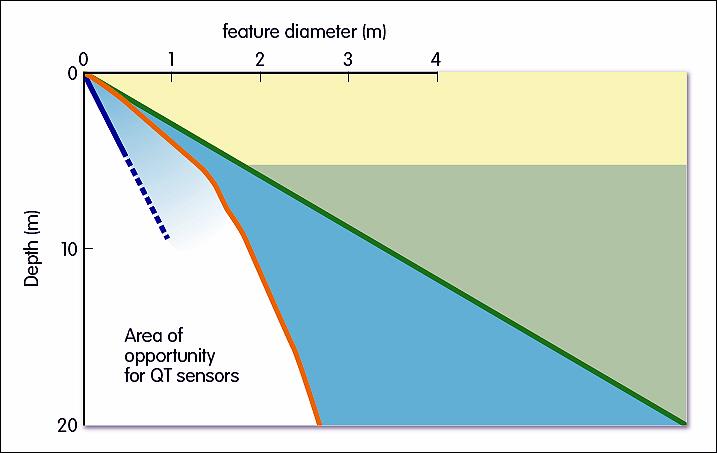 Gravity sensors could enable objects much smaller than 1m to be detected at depths of 10m or more. Source: UK National Quantum Technology Hub in Sensors and Metrology

Gravity sensors could also be deployed in space. “In fact, there have been missions up there – ESA ran one which could determine gravitation with a resolution of a few hundred kilometres.”

That satellite was GOCE – the Gravity field and steady-state Ocean Circulation Explorer. In one of the experiments, the satellite looked at one of the largest aquifers in northern India to see how much water was being extracted. “It found the groundwater level was going down all the time,” said Prof Bongs.

“But if we could get cold atom technology into a new generation of gravity satellites, we could get a resolution of 10km – and that would allow you to see the Somerset flood area, for example.”

This model of the ‘geoid’, delivered by GOCE in 2011, it was the most accurate yet produced. The colours represent deviations in height (from –100 to 100m) from an ideal geoid, with blue shades representing low values and the reds/yellows representing high values. A precise model of Earth’s geoid has a range of uses, including a deeper understanding of Earth’s interior, plus volcanic activity and earthquakes.

Another space related activity could be unifying quantum theory with the Theory of General Relativity. “We hope the difference between gravity and acceleration could be determined with atomic precision.

“The problem is the two theories are incompatible; how do we quantise gravity? Testing these theories in space might enable us to rule out or confirm some issues.”

The Space-Time Explorer and QUantum Equivalence Principle Space Test (STE-QUEST) was a candidate mission within the ESA’s Cosmic Vision programme. The mission was designed to answer a range of questions in fundamental physics by performing precision measurements with high accuracy atomic sensors.

The benefit of performing these experiments in space is a long drop time. “Precision improves as the square of fall time. You might get a fall time of 1s on Earth; in space, it will be tens of seconds, so there’s an improvement in precision of at least 104.”

Teledyne e2v’s Cross noted: “We are on the road to implementing space based cold atom interferometry for gravity and science instrumentation, in association with our partners.”

The Hub is also developing a compact, highly sensitive rotation sensor, with potential applications including inertial navigation and stabilisation. Looking to surpass the sensitivities of the best commercial fibre/ring-laser devices, researchers are working on a variety of systems, including: those with freely-falling atoms that allow measurement via the Coriolis effect; those with guided atoms confined to a ring structure; and a solution that is operated like an atomic clock.

And magnetic quantum sensors could find medical applications. “These might be able to measure the current flowing in the brain, perhaps helping to explain thought processes. Magnetic encephaly will help with research into dementia and, if we can develop a sensor which operates at room temperature, a device might be created which allows tests to be undertaken at a doctor’s surgery.”

How does the UK rank when it comes to cold atom research? “It’s an international field and every country has good groups,” said Prof Bongs. “Since a review of physics in the UK in 2005, there has been significant investment by organisations like EPSRC. I’d like to say we’re now much closer to the leading edge,” he concluded.