New applications for lasers are being developed as technology is improving – according to Dr Graeme Malcolm, co-founder of M Squared Lasers, which is pushing innovation with lasers made using in-house technologies.

M Squared was founded in 2005 to look at alternative applications to traditional lasers, which were mainly focused on light based materials processing,.

“We focus on three main areas,” he said. “The first is biophotonics, which combines life sciences and light based technologies; the second is chemical sensing; and the third, quantum technology, is creating next generation of sensors, communication systems, computers and ways of simulating complex computation.”

In biophotonics, M Squared has been recently working with a research group at St Andrews University to develop light based systems technology, which can be used to make light sheet microscopes. This not only enables a resolution high enough for the user to see the details of individual cells, but also provides a field of view large enough to observe large numbers of cells in tissue samples of up to 1mm sized cubes.

This could be useful to look at how neurons interconnect, which could help in the understanding of how the brain works and therefore in the prevention of degenerative brain disease.

“The market for neuroscience development is large because most of the world’s economies are looking at the ticking time bomb of large numbers of people getting this disease,” Dr Malcolm said.

The technology could also prove useful in developing areas of regenerative medicine, where stem cells could be used to regenerate organs like the pancreas and brain material.

In another optical system, the biochemistry of cells could be read and instant feedback provided, enabling point of care diagnosis and reducing health care costs.

In chemical sensing, lasers can detect the presence and concentrations of different chemicals. Many molecules exhibit strong absorptions at mid-infrared and terahertz (THz) wavelengths – roughly 3 to 30μm and 30μm to 1mm, respectively.

“There’s an area of the spectrum where molecules tend to absorb light and those absorptions are like fingerprints for different chemicals,” Dr Malcolm explained. “If we can produce tuneable lasers that can hunt through the infrared, we can use them to search for chemicals and gases like methane.”

Other applications include chemical detection; environmental monitoring of greenhouse gases and pollutants; prospecting for oil and gas reserves; medical diagnostics; and infrared countermeasures.

“My favourite is the use of laser technology in the Scotch whisky industry, where it can deal with yield control,” he said. “We can help to minimise the amount of whisky lost during the maturation process.”

In quantum technology, the company’s lasers are used to cool atoms to near absolute zero in order to observe a new matter state: the Bose-Einstein Condensation. 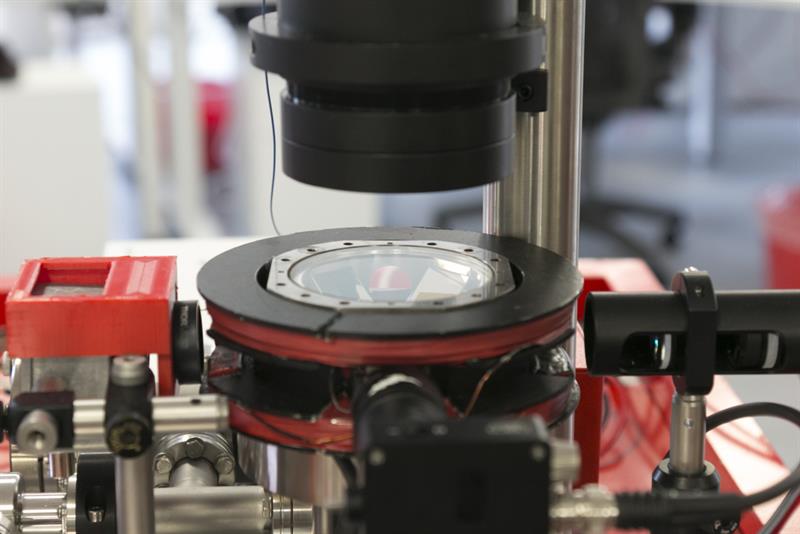 According to Dr Malcolm, the atoms to be cooled are held between magnetic coils and illuminated with two lasers in each of the three dimensions.

“We tune that laser to provide recoil against the thermal movement of the atom, so the photon pressure of the light prevents the atom from moving and cools it,” he explained.

“Using an atom interferometer as a sensor, we could potentially create new types of cameras, like the gravity camera, high precision ways of measuring acceleration, useful for navigation, or sensors for magnetic fields.”

Dr Malcolm said there were three ‘layers’ to the company’s optical mechanical technology.

The first type of lasers are single frequency or single wavelength light sources. Lasers appear to be only a single colour of light but are, in reality, a spread of colours. But, for single frequency lasers, this spread is incredibly small, making the light useful for precision applications, such as quantum technologies and calibration of Earth observation satellites.

In contrast to traditional ‘ball-and-spring’ mounts, which can drift with time and temperature and require readjustment, InvarianT mounts are said to never need realignment.

“The pulses of light are so short they create excitations that help us study biological materials, but don’t cause any harm or damage – almost like a flash that illuminates the cell.”

Sprite produces either multiphoton or phonon-based processes, which can be used in precision metrology of nanotechnology-based devices, as well as enabling highly localised chemical reaction in polymers. This is said to allow engineering of atom scale structures with resolution down to 100nm.

Lastly, the Firefly infrared and THz lasers can identify molecular signatures in chemical sensing. These are built using a novel tuning technology based on optical parametric oscillators (OPO).

“With non-linear material, by using high intensity light, you can excite higher order changes to the refractive index of those materials to create new wavelengths of light. This is called the Kerr Effect. If we harness that effect in an oscillator and an amplifier, we can start to create new colours of light.

“The OPO causes high densities in a non linear material, which creates two new photons and, by careful tuning of the laser cavity, can tune where that split occurs. This enables broad wavelength tuning in areas where lasers are normally difficult to operate.”

Applications for Firefly lasers include molecular and THz spectroscopy, non-destructive testing and the remote detection, analysis and imaging of hydrocarbons.

“In the past, you needed a PhD level engineer to drive the laser technology, so the number of applications was quite limited,” Dr Malcolm added. “We have automated the laser systems so that running one of these lasers or one of the light sheet microscopes is as simple as using a web page.”

Dr Malcolm can envision laser technology being used in an increasing number of applications in these markets; in diagnostics, to detect TB and fragments of cancer cells in the blood or biochemical traces of cancer in urine; in environment monitoring; optical pathology; and of course, quantum computing.

“We shouldn’t imagine that fields such as quantum technology will generally be around tomorrow or even in three years though,” he warned. “The huge growth in digital technologies in the last 10 or 20 years actually started 70 years ago with the invention of the transistor. It will take time, but thing I’m sure of is that laser technology will be part of the next generation of quantum electronics.”

Researchers develop ‘most stable laser in the world’

NIST chip hints at quantum sensors of the future