While none of us wants to hear a consultant telling us we have cancer, recent advances in medical technology and surgical procedures have improved significantly the prospects of our overcoming many of the cancers deemed previously terminal.

Cancer is one of the leading public health challenges in Europe. More than 3million cases are diagnosed every year and it is the second most common cause of death across the continent. When taking into account healthcare costs and lost productivity, the disease currently costs the European Union some €126billion per year.

Despite the improvement in techniques, cancer surgery carries with it some significant risks; one of which is the failure of the surgeon to remove all the cancerous tissue. So what better winner of the British Engineering Excellence Awards Grand Prix (sponsored by MA Business) than a system which holds in prospect a reduction in follow up operations, reduced healthcare costs and – most importantly – better peace of mind for the patient?

“LightPath revolutionises cancer surgery, reduces the need for follow on surgery and brings peace of mind to patients. It is poised to make a big difference in people’s lives.” 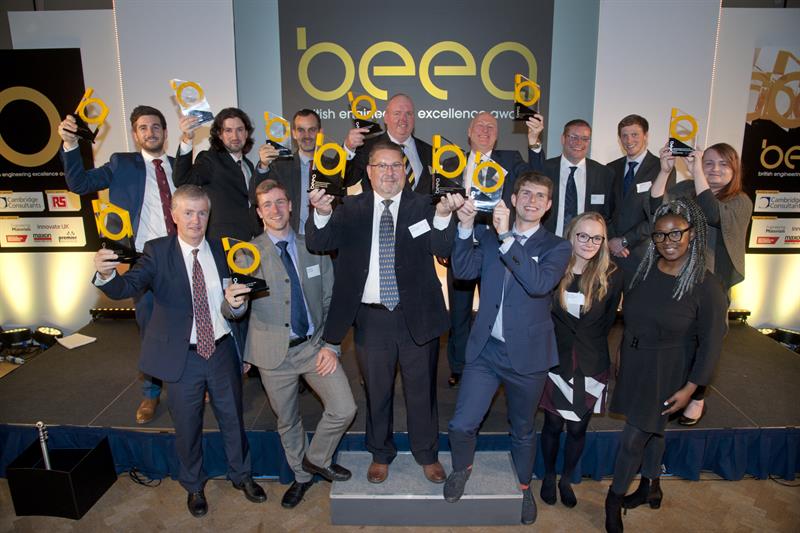 Consultancy of the Year

Sponsored by: Institution of Mechanical Engineers

Although Williams has undertaken projects outside of Formula One since the 1980s, its diversification started in 2008 with the hybridisation of Formula One. As the only team in F1 to develop a hybrid system entirely in house, it realised the commercial potential and created Williams Hybrid Power.

With growing expertise in hybrid propulsion systems, it was approached by Jaguar Land Rover in 2010 to help in the creation of the C-X75 hybrid supercar. This lead to the creation of Williams Advanced Engineering as an umbrella for projects outside of Formula One.

Williams says it is full of problem solvers, tackling complex engineering challenges on a daily basis. Prototype specialists, the company works faster than many others and can provide proofs of concept as rapidly as possible.

Apart from working with manufacturers such as Jaguar and Aston-Martin, Williams was named as the sole supplier of batteries for Formula E, designing a battery that can propel a car at 225km/h, while remaining practical in terms of aerodynamics, range, recharging times and safety.

In Season 2, the power requirement increased to 170kW – nearly 30% more than the original design.

Having built 40 batteries and a number of spares, the batteries have now completed two full seasons, with 760 race starts. So far, there have only been two battery failures during a race.

What the judges said:

“The challenge of designing and making batteries for Formula E which worked reliably was an impressive performance. It was hard to ignore the engineering excellence involved.”

Small company of the Year

From making and supplying hoses to customer specifications, Forth Engineering has developed into a specialist manufacturer and independent distributor of hydraulics and pneumatics.
Forth has developed a range of design capabilities, including mechanical, electrical, electronics and CE&I services. Specialising in technical innovation, Forth continues to develop a range of remotely operated vehicles, radiation tolerant cameras and remote tooling used in the nuclear industry for the inspection and manipulation of spent fuel and active waste.
In a Knowledge Transfer Partnership programme with Manchester University, Forth is looking to develop a robot that will allow equipment to be deployed in harsh environments such as nuclear, marine, gas, oil and subsea industries.

What the judges said:

“Forth has expanded its business by moving from traditional products to the supply and development of novel technology.”

Start up of the Year

Ultrahaptics’ technology uses ultrasound to enable ‘feeling without touching’. Using a small array of ultrasound speakers, it can create the feeling of virtual objects, switches and dials which float in mid air, or track the user’s fingertips to create a system that supports free space gesture recognition and control.

Ultrahaptics is seeing significant demand for its technology and has received orders from carmakers, companies manufacturing gaming consoles and consumer electronics and computer manufacturers.

The team has identified markets that it believes will become viable using its technology and has developed innovative ways to engage with these markets.

“Ultrahaptics has the potential to be a game changer in a number of markets. It has a sound business plan, significant backing, plus sales and orders in hand.”

Design Team of the Year

Developing consumer electronics products brings a range of considerations into play. The main target is often meeting an aggressive price point, but hardware choice is also important in providing the required functionality.

Cocoon, a technology company looking to transform the home security market, enlisted ByteSnap Design to provide electronics and software design expertise for its latest product. Working with Cocoon, ByteSnap helped the company to make the necessary hardware choices, develop prototypes, write software and obtain certification for the device in the EU and the US.

According to ByteSnap, the design presented particular challenges: it had to meet demanding video, Wi-Fi and audio performance targets at a commercial price point, whilst being tightly constrained mechanically.

These targets meant ByteSnap needed to bring together engineers with a range of experience and to work closely with Cocoon’s mechanical and software teams.

ByteSnap helped to develop the product specification by selecting the transducers, SoC and Wi-Fi module, with cost, time and risk taken into consideration.

The product was challenging in that it had to send and receive Wi-Fi signals, while preventing unwanted emissions and avoiding susceptibility to RF problems. Preparing for approvals, ByteSnap took a proactive approach and designed for EMC testing from the beginning.

In order to maintain quality, ByteSnap formed an independent test team, helping to maintain goals and avoid issues that could lead to project slip. Cocoon scheduled a closed user trial in August 2015 with early backers and ByteSnap completed software and electronic design in good time.

“A tight, well scheduled design team with clearly outlined job descriptions and the expertise needed to deliver the design on time.”

Electronic Product of the Year

One of the diagnostic tools available to cancer surgeons is the use radiopharmaceuticals, which collect in higher concentrations in cancerous tissue. These concentrations are detected using Positron Emission Tomography (PET) scanning, but this equipment is large, expensive and needs dedicated rooms and staff.

The LightPath Imaging System – designed, developed, verified and made in the UK – integrates state of the art imaging technology in a mobile device which provides surgeons with similar functionality at a lower price. It is also small enough to be used in the operating theatre and allows the surgeon to follow existing workflows with minimal disruption.

The LightPath Imaging System uses Cerenkov luminescence imaging to show the surgeon which regions of an excised specimen contain cancerous cells. However, Cerenkov radiation emits light at a very low level and it wasn’t until the introduction of electron multiplying charge coupled devices that it became possible to measure Cerenkov luminescence.

“It’s inspiring to see a UK company bringing this kind of technology to market. LightPath has the potential to make a massive impact on cancer surgery.”

Young Design Engineer of the Year

Graduate engineers represent a significant part of the future for UK industry. As employers look to refresh product lines and address new markets, graduate engineers have the opportunity to make an immediate impact with new design approaches and fresh thinking. It’s a classic case of someone hitting the ground running – and exactly what the Judges were looking for in this category.

Throughout the graduate scheme during and his two years as a lead engineer at Jaguar Land Rover, Chris Bellamy has invented, designed and developed creative and novel solutions to customer problems, as well as being involved in advanced vehicle development and vehicle sustainability.
One of his main achievements has been the pioneering of a human-centric design process, a concept said to be ‘very new’ to JLR. Working closely with the company’s consumer insight and human factors teams, Chris is said to have delivered ‘outstanding results’.
Amongst his innovative designs are a novel vehicle interior table system, which cuts weight by 50% and cost by 80%, while increasing the number of ways it can be used by a factor of five.

“He has achieved a lot in a short career; it’s not easy to make a mark in companies such as JLR at such a young age.”

Design Engineer of the Year

Alex McDiarmid is a passionate, enthusiastic and innovative design engineer who has proved to be an outstanding member of Parker Bestobell’s R&D and project design teams.

In the two years since joining the cryogenic valve manufacturer, he has designed a number of innovative products which have helped to secure major new contracts in the marine industry. Thinking ‘outside the box’ and applying himself diligently, he has challenged accepted wisdom and demonstrated true ingenuity when it comes to problem solving.

Once such challenge was to design a complete range of valves suitable for high pressure marine fuel applications – these needed to withstand temperatures of -196°C and pressures of 625bar. The result is said by Parker Bestobell to beyond anything it has previously manufactured. The challenge was even greater as the range had to be completed in time for launch at a prestigious exhibition.

He has taken part in a number of engineering projects with schools and the local community, including Get up to Speed with Engineering and Manufacturing – a showcase event dedicated to raising the profile of Engineering and Manufacturing which is visited by more than 2000 students from the Sheffield region. Alex also mentored a team from Bradfield School on a recent technology challenge.

“A driven young engineer who has moved his company’s products forward. Alex is enthusiastic in his encouragement of the next generation of engineers.”

Each year, the British Engineering Excellence Awards judges can, at their discretion, make a Special Award to an entry deserves particular recognition. This year, one company impressed the Judges by showing that British engineering excellence makes it possible to compete in the complex world of consumer electronics.

The MP3 format has not only revolutionised the way in which we listen to music, but also where. Despite this, many people have significant reservations about the format.

According to start up MQA, since the MP3 format was adopted, sound quality has been sacrificed for convenience. Typically, it claims, 90% of the information is discarded during the MP3 compression process.

MQA founder and technology inventor Bob Stuart is passionate about preserving audio quality and was confident that labels, artists and music fans would appreciate an audio format that could not only deliver rich sound quality, but also do so using a convenient file size. That format is MQA.

The first MQA enabled devices were launched by Meridian Audio in December 2015, followed by partner announcements at the Consumer Electronics Show in January 2016, where HTC showcased a ‘proof of concept’ by playing MQA music on its One A9 smartphone.

Hardware partnerships have also been reached with a number of companies, along with a long term licensing deal with Warner Music. Meanwhile, the Recording Industry Association of America says MQA is approved for delivering high quality music on streaming services.

“Bob Stuart’s development of the MQA audio codec – and its positive reception by leading consumer electronics brands – shows the UK is more than capable of holding its own in this highly competitive market.”

Providing a window into SoCs

The BEEAs names Lightpoint Medical as the Grand Prix winner