Today’s safety-critical embedded environments are becoming more connected to the outside world. The ongoing growth of the Internet and IoT solutions will further drive connectivity requirements for safety-critical systems for the foreseeable future. Aerospace, defence, automotive, medical and industrial control are just some of the vertical markets that will expand as the ability to interconnect and remotely work with devices grows.

The benefits of being able to monitor and control safety-critical embedded devices are real and substantial. Remote monitoring and command-and-control of embedded safety-critical devices will benefit military applications (e.g. UAV surveillance and payload delivery) as well as give consumers benefits such as enhanced personal mobility (e.g. mobile and implantable medical devices) and increased safety (e.g. vehicle-to-vehicle communications). Device makers will be driven towards networking their safety-critical devices in their bids to be innovative and stay competitive. However, with this increase in connectivity, safety-critical systems developers will also need to be concerned with security in addition to safety-critical functionality.

Developers of safety-critical embedded software can no longer consider the domain of security as being separate from the domain of functional safety. Any system interfaced to the outside world has the potential to expose security vulnerabilities. In particular, systems connected to the Internet and IoT need to be protected against specialized targeted malware attacks as well as a whole world of hackers.

The tie between security and safety is also acknowledged by safety related process standards. When there is a potential for security vulnerabilities, standards such as IEC61508/EN61508 (process), ISO26262 (automotive), IEC62304/EN62304 (medical), IEC62278/EN50128 (railways), and DO-178 (aerospace) require functional safety requirements to deal with them. Each of these process standards have requirements for function identification, specification, classification, design, development, and verification to show compliance with system safety requirements.

Security vulnerabilities in safety-critical systems are not merely academic concepts. There are published examples of safety-critical systems found to be vulnerable to security design flaws. In 2011, security researcher Barnaby Jack devised an attack to wirelessly take control of Medtronic’s implantable insulin pumps, demonstrating how such a pump could release a fatal dose of insulin. In 2014, researchers from the University of Michigan were able to take control of a networked traffic signal system currently deployed in the United States due to a number of security flaws. In today’s networked world, Johnny down the street, or a hacker halfway around the world, is now a potential safety threat if he hacks into a medical device or the local traffic light system. 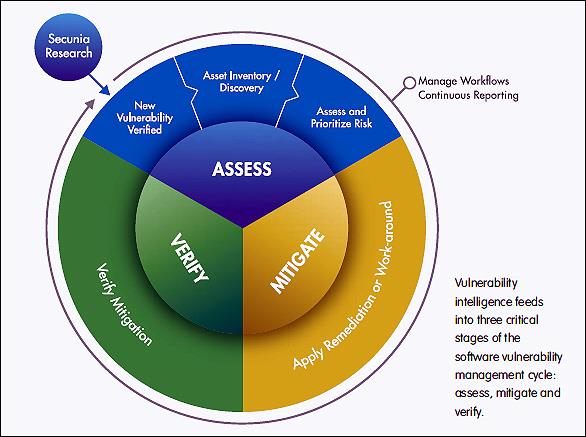 From a security standpoint, the basic safety-critical system’s isolation makes it more secure. However, hackers can attack the network monitored system via the Internet and exploit weaknesses in the networked application, TCP/IP stack, device drivers, or the OS itself. Each of these could provide a large surface for attackers. Furthermore, once an attacker gets into the system through the network, the entire system is potentially exposed. Typical microkernel architectures that link applications with the kernel to produce a single binary executable have no separation between user space and kernel space. Once a hacker gets into such a system, everything is exposed and open to exploitation.

A Type-0 hypervisor sits on top of bare metal, but unlike a Type-1 hypervisor, it does not use an assisting OS. A least privilege separation kernel is a Type-0 hypervisor that’s used to efficiently partition the system’s resources between guests and then tightly control the data flows of information between them. It is designed with security and minimal performance impact as its primary objectives. 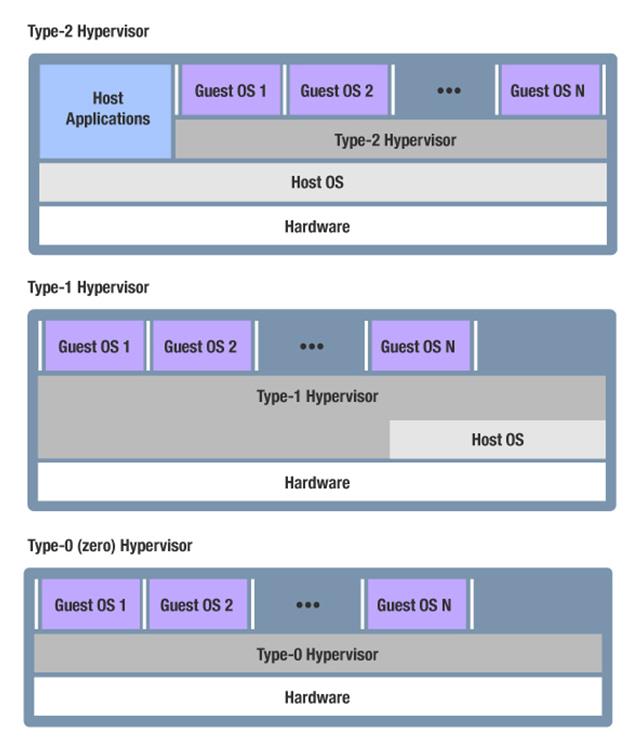 Figure 2 - The 3 different types of hypervisors 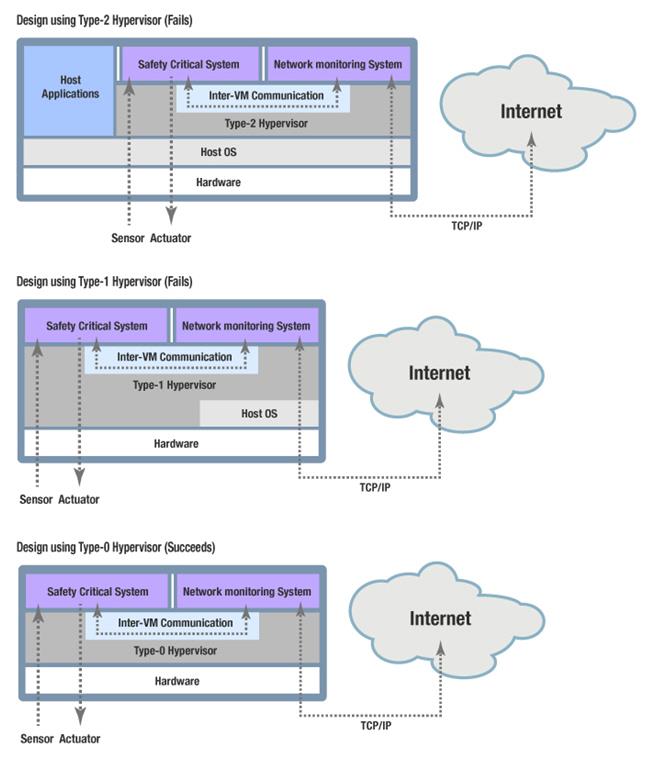 In this scenario, because the networked monitoring system is connected to the Internet, the host OS is also connected to the Internet. A security flaw in the host OS, or one of its applications, can thus be exploited by a hacker and the very underpinnings of the safety-critical system will then be compromised. Essentially, the safety-critical system is exposed to the security vulnerabilities of the host OS and its applications – a very large potential attack surface.

Using a Type-2 hypervisor will not work. It neither improves security nor retains the determinacy our safety-critical system requires.

Obviously, the typical Type-2 and Type-1 hypervisors are not going to be able to provide our safety-critical embedded system with the security and determinism it requires. What is needed is a hypervisor that’s primary functionality is to efficiently partition the system’s resources (e.g. CPU cores, I/O devices, and memory) between guests and then tightly control the data flows of information between them. Functionality like device drivers and networking need to be pushed up the stack into the guest OSes, allowing the hypervisor to reduce the amount of privileged code. When we do these things, we then have a least privilege separation kernel.

In the least privilege separation kernel’s scenario, the safety-critical embedded system and networked monitoring system will again be placed within the hypervisor as separate guests. The least privilege separation kernel, being a Type-0 hypervisor, sits on top of bare metal and does not use an assisting OS for virtualization. That means there are no host OS applications, dynamic memory manager, process model, dynamic scheduler, file system, network stack, device drivers, system API, application ABI, etc., to provide possible attack surfaces.

Using a least privilege separation kernel, the safety-critical embedded system can retain its determinism and have improved security through the reduction of its attack surface.

A least privilege separation kernel is primarily concerned with partitioning a system’s hardware resources among guests and tightly controlling data flows between them. It isolates the guest systems into separate virtual machines so they cannot reach or interfere with each other. Furthermore, a least privilege separation kernel does not contain OS-style schedulers, kernel services, device drivers, file systems, network stacks, etc. which can be exploited to compromise a system. It can be as small as 25K lines of code, and be deterministic.

Layering safety-critical software with a least privilege separation kernel is a viable method of providing the security a connected safety-critical embedded system needs through system isolation, while maintaining the deterministic behaviour required of the safety-critical functionality.