Depending upon whose prediction you are inclined to believe, the Internet of Things could comprise between 20billion and 50billion devices within the next few years. And those kinds of numbers suggest there is an opportunity to develop innovative products that not only provide point solutions, but also have wider application.

The accepted view is that products for the IoT will communicate wirelessly. So, if you have an idea, how can you develop a quick proof of concept? Sierra Wireless believes it has the answer with Project MangOH.

According to the company, Project mangOH is a wireless open hardware reference design intended to support the rapid development of IoT solutions. The reference design has been developed around Sierra Wireless’ AirPrime WP Series modules and comprises a flexible Arduino compatible platform based on industrial grade components. This is said to enable developers to go from prototype to market more quickly.

Project MangOH, which has received support from Freescale, Texas Instruments and Linear Technology, also incorporates an IoT connector designed by Sierra Wireless. This has been released as an open interface standard and the company hopes it will simplify development, promote interoperability and enable more wireless use cases for IoT.

Olivier Beaujard is Sierra Wireless’ vp of market development. He said Project MangOH was launched in June 2015 at the company’s Innovation Summit. “It’s an event where we gather together developers who use our technology. We had about 350 people there, all exchanging ideas about the IoT.

“We had already realised that, when people have ideas about connecting projects, they start to use prototyping tools then have to add 2G, 3G or 4G devices. To do this, they were having to buy development kits created for each product, connect the boards to a host PC and develop the necessary software. We also realised the designers were coming to us from other development communities.

“All companies offer development kits,” he accepted, “but what hasn’t been available is open hardware with different options. The reference design brings together open software, open hardware and the Legato platform to allow designers to do rapid prototyping. We haven’t seen anything like Project MangOH on the market.”

Project mangOH and the IoT connector standard have been developed to provide engineers with the building blocks they need to get from their concept to prototype and then into production without the need for significant redesign.

Philippe Guillemette, chief technology officer, noted: “Along with our AirPrime WP modules and the Legato platform, we have a flexible solution to build and test new ideas, simplifying development.”

Project MangOH is built around Legato, an open-source Linux-based platform pre-integrated with the AirPrime WP module. The Project mangOH reference design is said by Sierra Wireless to adapt to a range of IoT use cases. 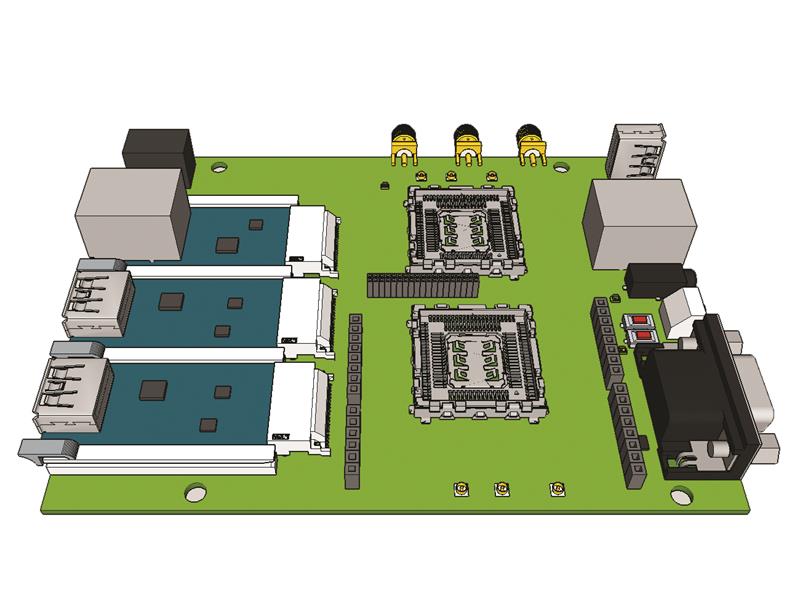 Legato enables the WP module to collect data seamlessly from the IoT modules and Arduino shields, so that every open hardware shield becomes plug-and-play. Additionally, every wireless and sensor module designed with the new IoT connector standard can be added in any combination and used out-of-the box with full Legato support.

According to Beaujard, the idea behind Project MangOH was to do something simple. “It’s modular and supports a coprocessor,” he noted. “But we have also opened it up to IoT connectors of any ‘flavour’.”

He claimed that when a developer first gets an idea for a new product, they start creating the device, but without any connection. “If they want to connect their product idea to the internet, we have provided them with all the drivers to access their hardware, but also to access the Cloud.”

Sierra Wireless says Project mangOH allows IoT developers to prototype and test ideas in days, rather than months, and with minimal investment. Once the prototype is ready and tested, it can be repurposed for mass production using the industrial grade components of the reference design and applications developed using the Legato platform.
Ashish Syal, principal engineer, advanced technology, Sierra Wireless, said: “What makes IoT modules different than other open hardware solutions is that they can not only be used for prototyping, but can also be used in production. As well as being plug and play from a hardware perspective, they are recognised immediately by the WP module via the Legato Linux framework.”

These ‘industrial grade’ plug and play modules are said to make it easy to add new combinations of wired, wireless and sensor technologies. Technology partners adopting the initiative include: Freescale, which has worked with Talon Communications to create a Thread module for home automation applications; Linear Technology, whose Dust Networks group has developed a module for industrial monitoring applications; and Texas Instruments, which has created ZigBee, Wi-Fi and Bluetooth module for wireless PAN applications.

Other IoT modules in development are said to include CAN bus, USB hub, USB single, breakout board, RS232 and RS485.

Project MangOH is claimed to bring flexibility and expandability. Flexibility comes from CF3 Snap In sockets that allow developers to select the cellular module appropriate to their design. Expandability is said to come from the Arduino connector and the three IoT module connectors. This allows third party Arduino shields to be used, with software support through Legato.
The IoT connector has been designed by Sierra Wireless to provide a single interface for a variety of wireless and sensor technologies and its first implementation is in Project mangOH. According to the company, Freescale, Linear Technology and Texas Instruments have already developed wireless modules based on the approach.

Texas Instruments, meanwhile, is offering several wireless connectivity options for Project mangOH, including the WiLink 8 module and the CC2530 wireless MCU. “We are seeing considerable demand for industrial grade solutions for the IoT,” said Eran Zigman, TI’s business line manager for wireless connectivity solutions. “The IoT connector meets a real need from our customers for a standard that is robust enough to enable years of service in industrial equipment.”

Beaujard claimed developers like the Project MangOH approach and added that it had a positive reception at the Innovation Summit. “R&D customers have already adopted it for their next generation of products and we now want to grow the community,” he concluded.

The beta release of the schematics, Gerbers, bill of materials and documentation for Project mangOH and the IoT connector are freely available under an open hardware license.

Beyond the reference design