There are transistors and then there are RF power transistors. Supplied in rugged packages, these devices supply high levels of power across the various frequencies used by today’s communications systems.

Although RF power transistors are available from a range of companies, one of the leaders in the field is Ampleon – recently established as a standalone company following its sale as a consequence of the merger between NXP and Freescale.

Rob Hoboen, manager of Ampleon’s multimarket and RF energy business unit, said the company has been working on the development of LDMOS based RF power transistors for the last 20 years. “We’re now in our ninth or tenth generation of products,” he said. “It’s a good and cost efficient technology.”

For much of this time, RF power transistors have been manufactured using LDMOS technology. LDMOS – laterally diffused MOS – has been in use for more than 20 years, providing the foundation for companies to push operating frequency, gain and output power. Capable of being used in applications requiring frequencies of up to 3.5GHz, LDMOS technology has been widely deployed in mobile basestations, but is now beginning to find application in such sectors as LED lighting, broadcast and white goods. “Plasma lighting,” Hoboen added, “needs leading performance at low frequencies.”

Such is demand that the RF power transistor market is seen to be worth around $1billion a year, with growth coming from the RF energy sector and from the automotive industry.

However, LDMOS based devices are now facing a challenge from parts manufactured using gallium nitride (GaN) technology. “Some say GaN will replace LDMOS,” said Hoboen, “but I don’t see that happening quickly.” Nevertheless, Ampleon is interested in GaN technology, as is Infineon (see box).

One of the benefits claimed for GaN is higher efficiency – and that is proving attractive to the mobile operators. “We are beginning to see a market segment appearing for GaN,” Hoboen said, “and Ampleon is actively developing products.

“GaN can achieve higher efficiency levels, but it’s only manufactured on 4in wafers, which means the economics are a long way from those of LDMOS, which uses 8in wafers. Then there’s the additional cost of the substrate. So there are cost and quality issues,” he continued. “But it’s still a first or second generation technology, so it’s a matter of selecting the right technology for the application.”

While GaN based power transistors can produce outputs of up to 700W, LDMOS can almost double that output, with 1.3kW parts available. “GaN will make advances,” Hoboen conceded, “but it’s very much work in progress.”

For the moment, Ampleon is continuing to push LDMOS technology. “That’s our way of innovating,” he added. “We’re looking to push frequency and output power. While our ability to increase power is limited, we are looking to address higher frequencies.”

Currently, he said, Ampleon is getting good efficiencies from devices designed for use in the S band – 3GHz. “We’re now working on 6GHz parts, but also looking to take LDMOS into the X band at 10GHz.”

Typically, RF power transistors have been supplied in ceramic packages, but as LDMOS technology develops, so too does packaging technology and devices from the lower end of the power range can be specified in plastic packages.

“Ceramic packages have always been available for those with high performance requirements,” Hoboen noted, “but overmoulded plastic is now available, although these parts will see the loss of some efficiency.”

RF power transistors have also been supplied with air cavities. “The benefit of an air cavity is that it enables better conversion efficiency,” Hoboen explained. “The amount of efficiency improvement depends on a number of factors – including power levels and frequency – but the air cavity basically reduces dielectric losses.

“The improved efficiency of the air cavity package means the part consumes less energy in order to provide a given radiated power.”

Customers who specify an overmoulded part are likely to have cost as their dominant criterion, rather than performance. 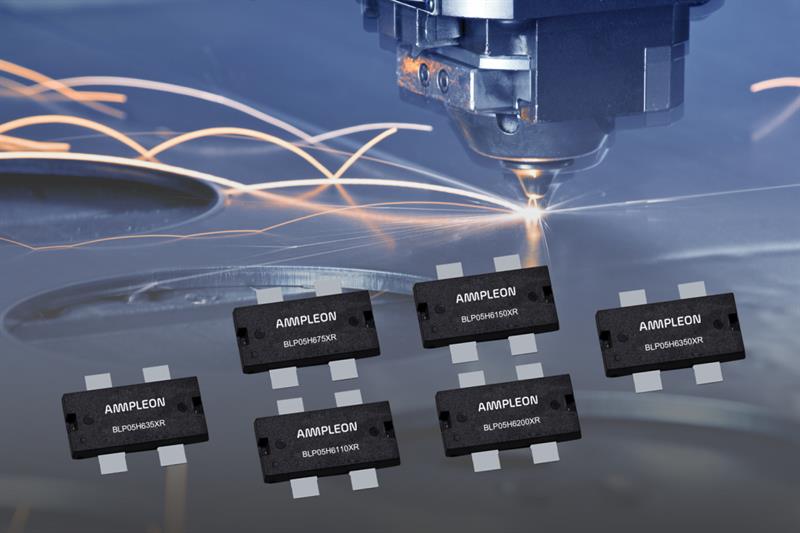 Three packaging styles are available for Ampleon’s RF power transistors: ceramic; plastic with air cavity; and overmoulded plastic. “Plastic packages are generally suitable for power levels of up to 250W,” Hoboen said, “but we’re working on increasing this to 500W. This all comes down to the thermal design of the transistor and the power density of the die. If we have a larger package, then it may be possible to use plastic.”

Ampleon has supplied its first GaN devices in ceramic packages, but is also looking at bringing plastic overmould and plastic packages with air cavities to the range.

In terms of developing markets, Ampleon has its eyes on what are being called RF Energy applications, which include lighting, heating and cooking. These applications are focused on the 2.4GHz part of the spectrum. However, Ampleon accepts this sector has its own challenges. But it says that RF power transistors offer ‘significant advantages’ over existing solutions – such as the magnetrons used in microwave ovens.

“The question in this sector,” Hoboen pointed out, “is how hard can you drive output power? Can you produce these devices in volume at suitable quality levels and with the ability for them to last 10 years or more?”

Ampleon has recently unveiled the BLP05H6xxxXR series. With output power ranging 35W to 700W continuous wave, the rugged RF power transistors are supplied in an SOT1223 overmoulded plastic package and can be used in applications of up to 600MHz. Potential applications for the parts range from CO2 plasma lasers and MRI medical scanners to plasma lighting and FM radio.