Designing with, not for manufacturing

A cloud-based platform looks to make collaboration between designers, suppliers and manufacturers easier.

At last year’s Altium Live, an event dedicated to help printed circuit board (PCB) designers, several new product announcements were made, including the release of Altium Designer 18 and Nexus.

Commenting, Ted Pawela, Chief Operations Officer, Altium, said that despite the launch of these products much of the collaboration that is required between designers, the supply chain, and manufacturers still tends to be unstructured.

“One of the most important elements of any collaboration in this industry is being able to take a PCB from a concept or idea to the design phase, and ultimately getting it manufactured. A designer will have to connect and then work with a manufacturer and this can prove a slow and laborious process.”

Leigh Gawne, Director of Cloud Operations at Ciiva, agreed, describing those connections as “weak and informal”.

“In the past, design and manufacturing tended to be done within one company,” he explained. “Today, in order to remain competitive, most companies have a core competence. Despite that trend the various processes remain closely associated with one another.

“The partitioning of the work flow and the complexity of technology means the process has become increasingly difficult to control. These different stages have to be brought together in some way in order to realise and then bring to market a product,” said Gawne. “Too often communication is made through uncontrolled documents and emails. What’s more, the information that is sent is mostly of minimal detail, resulting in mistakes and leading to those involved having to go back and ask more questions.”

In response Altium is focusing on improving the collaboration and communication between those involved in this process.

“If we are going to create a more connected, more advanced world, we will need to get considerably better at collaboration,” confirmed Pawela.

Altium has acquired a number of businesses in recent years – from content providers to suppliers of cloud-based CAD for electronics – as the company looks to move beyond traditional desktop application software to a more modern web, or cloud-based, software package.

To accommodate this shift, Altium has launched a cloud-based platform, Altium 365. Integrated into Altium Designer 19, it offers an easier and more efficient way to connect designers with component distributors and manufacturers, so they can share information and design collaboratively.

It does this by allowing designers to share working schematics and 3D board designs with manufacturers who can mark up designs in real time using a web browser.

“EDA tools have tended to be confined to the desktop,” explained Lawrence Romine, Altium Vice President of Corporate Marketing. “Operating in silos it has mostly been up to the designer to share information to other parties who require it. Altium 365 has been designed to make the process and the user feel less isolated. It will give designers and engineers – for the first time – the ability to design with manufacturing rather than design for manufacturing; and will help to speed up the process from the design process to manufacture.”

The cloud is a critical part of this new infrastructure and facilitates a new way of communicating, according to both Gawne and Romine, because it provides the ability to communicate on the same bit of information in real-time. 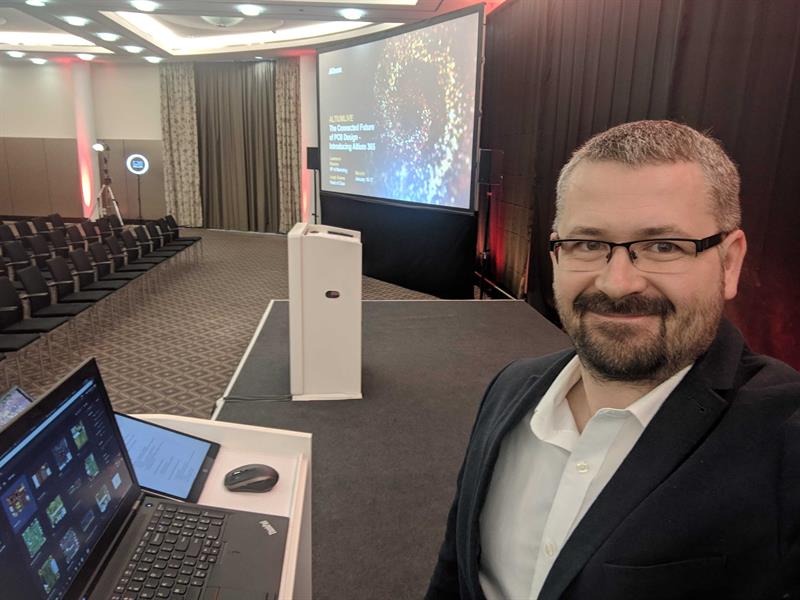 “Traditionally,” Gawne said, “the different domains have been restricted to exchanging static images or other files at a specific given point of time. But, designers like to design. This means the second that information has been sent, it is no longer an accurate representation.”

At present, designs are released in flat files, spreadsheets and images which are exchanged with manufacturers who then adapt and adjust the design. That information is passed back to the designer and this is not only timely but often has to be undertaken three or four times.

“Sometimes when you exchange details, by the time any feedback has been received it’s obsolete because it’s been days and your design has moved on,” agreed Pawela.

This means that manufacturability of designs and pricing details can be obtained via the click of a button – but with the designer controlling what they share and who they share it with.

The platform doesn’t comprise of static screenshots, but rather “real” designs.

“Those who have access can see exactly how it looks in Altium Designer,” explained Pawela. “As it is connected to the cloud, any changes are also added automatically and can be seen. We want to take a design and put it in the hands of everybody that it involved in the process of going from idea to a realised product.”

The cloud was an obvious choice because of the potential pitfalls of an internal network, with IT and firewall issues to contend with, according to Gawne.

The cloud also provides users with what are claimed to be “limitless” possibilities - meaning that as new challenges arise, more capabilities can be easily added to assist the design, supply and manufacturing process.

As for current functions, everything inside the platform is indexed to allow for easy navigation of schematics. Layouts are readily accessible and users can even pan and scan the designs, so areas such as components can be inspected. The platform also provides 3D visualisation, meaning it’s possible to see the proposed final board.

Apart from allowing shared viewing, the platform also offers the ability to make comments, which appear in Altium Designer in real-time. This means a particular component in the schematic or a part of the board can be selected, and a contextual comment added to it.

The platform also has native plug-ins such as Inventor and Solid Works, meaning that ECAD and MCAD vendors can make changes, be notified, and then have the capability to pull and push between domains in either direction, again, in real-time.

Another benefit of the software is ‘Octopart’ – a new and powerful component search engine that helps electronic designers find the components they need for their designs and provides the data they need for making informed decisions during the design process.

Price, stock levels, data sheets and reference designs are all available. The BOM tool aims to achieve the best deal, and the Common Parts Libraries for prototyping and production ensures that the parts in a design will be ready for build when the designer is themselves.

“A lot of the time people don’t consider component availability. All of a sudden, information is made available to all three parties, so issues such as obsolescence can be flagged and dealt with at an earlier time before it becomes a major issue,” explained Gawne.

“Sometimes things that seem insignificant, like a 10c capacitor that you designed in and single sourced with a lengthy lead time could prevent you from meeting your release date. Or worse, without that foresight you could go into full production only to lose that supply and your line completely stops simply because the information wasn’t accessible whilst you were designing.”

As library management is interwoven into the software, there is a single source of truth, which means no duplication.

“Project level libraries run the risk of copies being made that have error propagation. With Altium, those contributing to the design are seeing the same part,” explained Pawela.

It’s important to note, that as well as being a built-in tool in Altium Designer, 365 is also accessible via a regular browser. This means that those who would not normally use such a design programme, for example the manufacturer or procurement person, will not be required to navigate through unfamiliar software to obtain information.

In fact, Romine said changing people’s work flows was not the intention of the platform, though it is indeed possible to change them with the tools provided inside the software.

“We recognise that people have their way of working and this was always at the forefront of our minds when developing Altium 365,” he said.

“What 365 should enable is an easier way to communicate and keep track of information. It’s a tool to let users begin to make that step towards bringing these three isolated domains together,” concluded Gawne.

Designing with security in mind

Directives and standards needed when designing for medical applications