Benchtop power supplies have had to evolve rapidly to provide the features needed to test PCBs integrating complex components.

The first instrument which comes to the mind of most engineers when it comes to testing a new board is an oscilloscope. While that will help to assess many aspects of the board’s performance, it’s not the only device that will be needed – a good benchtop power supply is just as important.

One reason for this is the range of more advanced components being integrated onto PCBs. Mark Edwards, managing director of electronics test and measurement specialist Aim-TTi, said: “Big FPGAs, for example, draw a lot of current. While bench power supplies must be capable of providing up to 60V, they also need to be able to supply up to 20A at lower voltages. Meanwhile, voltage rails are changing and there’s not just one supply rail to a PCB any longer.”

According to Edwards, the need for engineers to control voltage and current more accurately during test has evolved. “Having said that,” he continued, “many Aim-TTi power supplies introduced some 40 years ago are still in regular use. But the technology used in recent designs has brought new features.”

He also said the range of test voltages required today isn’t fully met by the nominal 0 to 30V, 0 to 2A supplies used commonly in the past. “We are now seeing increased demand for supplies that provide more than 60V and more than 20A, with overall power levels ranging from 300W to 1kW.”

Looking to address more complex requirements, Aim-TTI is now offering multichannel supplies with time managed output switching. These help test engineers to ensure that supply rails are in place to protect the power cycling of circuits at the prototype stage of development. “We have a range of three output supplies,” Edwards pointed out, “and will shortly be releasing a four output model, with equal power available on each multi range output.”

A traditional three output supply might have two 30V outputs, with an auxiliary output of around 5A, Edwards explained. “Now, because of demand, we have introduced two main rails and third fully controllable rail for specific voltages. And, with the MX range, the 315W model can be set in multiple ranges. So you could parallel internally to give 35V at 6A, with a third output giving 70V at 3A. It’s all about flexibility.”

Benchtop power supplies in the past were predominantly linear devices. However, despite providing low noise and good stability, linear supplies tended to be large and relatively inefficient.

“TTi produced its first digital version in 1978,” Edwards remarked. “Since then, the technology has evolved and switch mode has become the norm – particularly for higher power devices. At first, switch mode wasn’t popular because it generated more noise and had a longer response time. But modern technology has changed that. Today, mixed mode devices can convert 240V AC into DC using switch mode, then pass that through a linear output stage that regulates the supply in a traditional way. This combines the efficiency and size benefits of switch mode with lower noise and less ripple on the output.”

Doug Lovell, sales director of distributor Telonic agreed. “Historically, engineers would have selected a linear power supply, but switch mode technology has advanced to the point where it is approaching linear performance. That’s a huge advantage because switch mode supplies are smaller.”

According to Edwards, most power supplies rated at more than 100W use switch mode technology. “The QPX and CPX ranges use our PowerFlex architecture to provide higher currents as the set voltage is reduced. While PowerFlex uses mixed mode regulation, the PowerFlex+ architecture uses a multiphase conversion technique to eliminate the need for a linear output stage and this provides a wider voltage-current combination. Using this technology, the QPX600D can provide up to 80V or up to 50A within its 600W operating envelope.”

Lovell said that, typically, a bench power supply used to offer 0 to 50V and 0 to 10A – a total load of 500W. “Today, devices are smarter, with a wider voltage range and a wider current range. That means engineers can use a higher voltage at lower current and vice versa. In this way, one power supply can replace several units that might have been needed in the past. But range is most important.

There’s also increasing demand for greater accuracy. “In some ways,” Edwards contended, “this runs against power. So, while people want more power from a device, they also want to be able to measure lower currents – standby consumption, for example.” 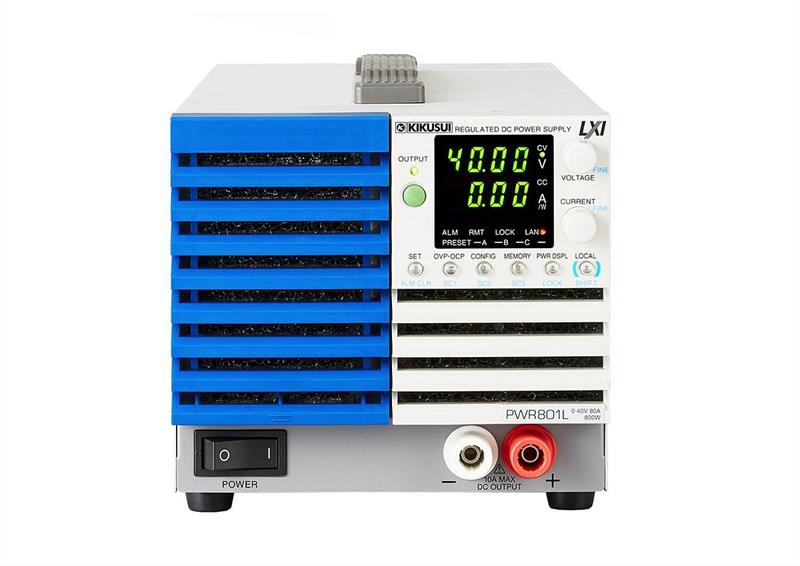 Lower power supplies are often required to supply and measure currents of less than 1A with good resolution. “Our PL and QL models,” Edwards explained, “offer a selectable 500mA range to provide increased resolution and the MX series has meter resolutions as low as 1mV and 0.1mA.”

Resolutions in the mA range also enable measurement of non load conditions to see if there are faults. “Previously,” Edwards highlighted, “this was done with a DMM and you can now do away with that.”

Lovell believes stability is also an important feature. “If you compare top of the range supplies with others, you’ll find they have stable, clean outputs. If you want 20V, then you’ll always get 20V.”

And it’s in product quality that Lovell has an issue with some manufacturers. “A common issue with lower cost supplies is that when you turn the output on and set, say, 12V, a cheaper supply will ramp beyond 12V and then settle. That overshoot can result in an overvoltage being supplied to the board under test and we’ve seen examples of expensive boards being ‘fried’ in this way.”

With touch technology being applied in a wide range of applications, is there demand from users for touch interfaces in bench power supplies? Lovell said that, in the past, there would have been a pot for voltage and a pot for current. “That changed to one pot, but customers didn’t like that, so the latest supplied have gone back to having pots for voltage and current.”

Edwards said the front panel didn’t change significantly for many years. “But, while many engineers agreed that the set ability of digital interfaces offered advantages, many still preferred rotary controls for quick adjustments and threshold testing. The consensus amongst engineers is that they like knobs; if they are ramping a voltage, they like to be able to turn a knob and see the effect.”

For all the technology integrated into a benchtop power supply, another factor dominates – size. “Five years ago,” Lovell observed, “supplies were probably twice the size they are today, but with less connectivity.” Edwards noted: “Front to back length needs to be minimised to ensure the device doesn’t take up unnecessary bench space. While many power supplies are only 1U high, they are deep and have high forced air noise.”

Looking to the future, Lovell noted a trend towards universal supplies. “If a company makes an autoranging supply,” he concluded, “it only needs to make one model. It can concentrate on developing that, making it in higher volume and selling it for less.”

Using good power supply design to help save the climate

Power at your fingertips

The redesign of a high reliability avionics power supply