You've got the power

By 2030, over 50% of car production will be electric. Jaguar recently announced that, from 2025, it will only sell electric cars while many other big names in the automotive sector are implementing similar strategies.

But there is a limiting factor - batteries. So much so, in fact, that the term range anxiety has been coined, a name for the specific fear that your EV won’t reach its destination before running out of power. Thankfully, Europe’s leading scientists are researching ways to improve battery life and performance.

Batteries are one of the key innovations that define the current technological era. They enabled the development of everything from mobile devices to renewable energy generation, as well as EVs. But, even today’s state-of-the-art lithium-ion batteries (LIBs) have their limitations. The ideal battery would have more charge cycles, longer life-span, faster recharging, higher energy density and lower cost than today’s LIBs on the market. In addition, safety, recyclability and environmental impact must always be considered carefully.

One avenue of research that could create the batteries of the future, is the use of new materials; advanced types of carbon, such as graphene. It is important to tackle this challenge from different fronts, covering both technological and performance optimisation as well as more fundamental concepts. In the former, we can exploit graphene additives that increase the power performance of LIBs. In the latter, we investigate novel graphene-based materials for Na+-ions in sodium-ion batteries (SIBs) or for sulfur in lithium-sulfur (Li-S) batteries. The European research initiative the Graphene Flagship has been looking into how introducing graphene and layered materials that can improve batteries’ performance, with some startling results.

Some of our industrial members are working and selling carbon-based materials for several years. For example, Graphene Flagship’s Associate Member OCSiAl produces highly conductive nano-materials to improve batteries’ performance. One of their top products, TuballTM, is ideal for battery applications. More than 90% of their customers request their Tuball Batt dispersions, which they offer in N-Methyl-2-pyrrolidone (NMP) or in water, for the manufacturing of LIB cathodes and anodes, respectively. Their product can be directly poured into the slurry mixing process of the battery manufacturer.

One of the Graphene Flagship’s Spearhead Projects – industry-led initiatives to bring graphene technology closer to commercialisation – is Graphene Enabled High-Energy Batteries for Automotive Applications (GrEEnBat). This project aims to create a working battery module for automotive applications, using silicon-graphene composite anodes in LIBs, able to compete with the projected state-of-the-art available in 2025.

During the last year, the project has focussed on upscaling the production of high-quality anode materials to the tonne-per-year scale, and improving the electrodes’ areal capacity, and thereby energy density and cyclability, i.e. life-span. The researchers have also worked on optimising their electrode recipes, electrolyte formulations and cell designs. 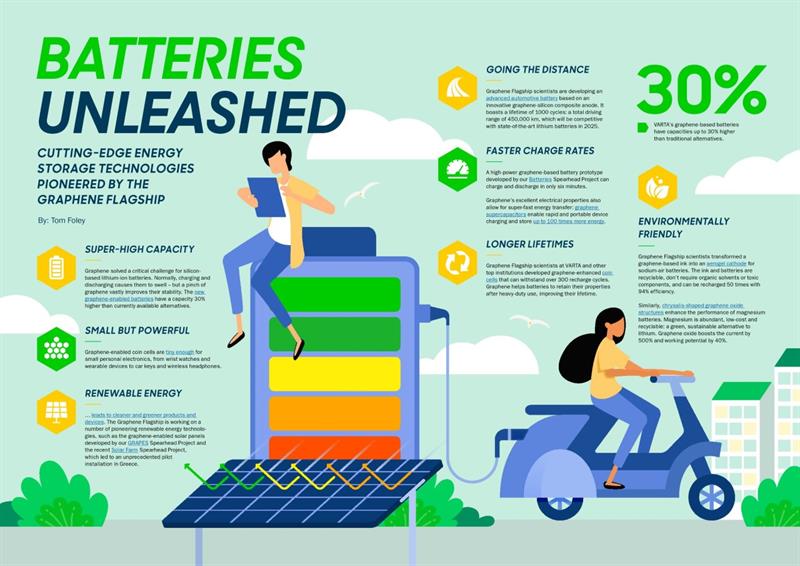 Graphene is also making waves in smaller scale batteries — for electronic devices such as watches, wearable devices and headphones. Silicon-based anodes in LIBs are one promising alternative to the traditional graphite, in theory offering a much-improved storage capability. But in practice there have been challenges with using silicon as the active material — as it is charged and discharged, its volume expands and contracts, leading to stresses and fracturing in the anode, ultimately causing the battery to fail after too few cycles to be of any commercial interest.

However, researchers within the Graphene Flagship have found a way to solve this in coin-sized batteries; a tiny amount of graphene stabilises the anode during the charge and discharge cycle by handling the silicon expansion.

As demand for rechargeable batteries continues to grow, it increases the strain on lithium resources and ultimately increases the cost of the raw materials. Compared to lithium metal batteries – the “Holy Grail” of many efforts in battery R&D– using magnesium metal anodes renders a battery much less prone to form dendrites, which can cause short circuits and, in rare cases, battery fires. The drawback? Poor practical cell performance, largely due to the lack of suitable cathodes.

To solve this, Graphene Flagship researchers have developed a brand-new cathode material that could lead to more powerful, longer-lasting batteries for mobile devices. The material combines the properties of vanadium with graphene oxide to create a cathode with improved chemical and electrochemical stability, as well as kinetics. The resulting rechargeable coin-cell, thus a lab-level proof-of-concept device, can operate with significantly higher currents (i.e. power outtakes), an often-limiting factor of magnesium-based batteries. At the same time, it offers somewhat higher cell voltage than competing chemistries.

Another metal that Graphene Flagship researchers are working on is sodium. Despite still being far from commercial application, a new anode material concept for sodium-ion batteries based on “Janus” graphene stacks present an interesting concept to engineer energy storage.

Whether you’re considering batteries for EVs, electronics or other applications, the key concerns of performance, cost and sustainability remain the same. Through the collective effort of global researchers and scientists, graphene has proven its potential to solve some of the issues that limit batteries today. Batteries may well have defined the current technological era thus far, but with these new technologies on their way to commercialisation, it is exciting to see what the future will hold.

Power to the people