Work on Crossrail, or the Elizabeth Line, Europe’s largest construction project started eight years ago. A complex engineering project, it runs 100km from Reading and Heathrow in the west, underground across London to Shenfield and Abbey Wood in the east. The first rail services running through central London are due to start at the end of 2018 and, once complete, the new line is expected to be able to handle more than 200million passenger journeys a year.

The project has overcome some enormous civil engineering challenges, from the boring of 42km of new tunnels to the building of 10 new stations, as well as a host of technical issues – the most complex involving the connection and successful interfacing of three very different signalling systems.

On top of that was the need to commission and build a fleet of brand-new railway carriages that can deliver a markedly improved customer experience.

According to Chris Binns, the line’s chief engineer: “Working on Crossrail has been a challenge, but is extremely rewarding. The line will be a catalyst for regeneration in terms of both jobs and businesses. We’re already seeing its impact across the London region.”

The Elizabeth Line is 84% complete, as of May 2017, and infrastructure designs are coming in for final reviews and sign off.

“I head up the technical assurance team,” Binns explains, “and designs are being assessed and construction and commissioning tests are well underway.

“With the tunnelling complete, our focus is now on the complex task of fitting out the new tunnels and stations with the infrastructure and systems they need – including the installation of track, tunnel ventilation, high voltage power, traction power, signalling, communications and overhead line equipment.”

The statistics associated with this phase of the project are no less impressive than those with the tunnel engineering – from the 15,000km of cable being installed to deliver the power, lighting and communications systems needed to the 4km of full height platform edge screens being installed at stations across the line.

These floor-to-ceiling platforms screen doors are being installed at each of eight new underground stations and above each there will be a passenger information screen.

“These screens will be operated by the train signalling system, ensuring they operate alongside train movements,” Binns says.

“We have also incorporated extraction ducts into the design, which sit in the screens just above the doors helping to maintain air flow through the station. They can also be used to extract any smoke from the platform in the event of an emergency.

“We’re currently turning on all the systems in a controlled fashion. We’re carrying out static tests at the moment, moving to integrated testing later this year. Dynamic testing, which will start in the autumn, will involve taking the new Aventra trains, being designed by Bombardier, down into the tunnels.” 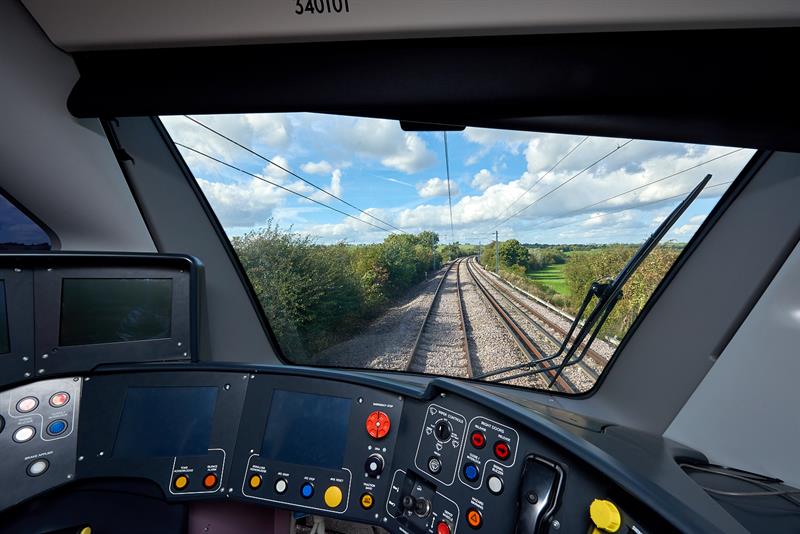 “Those signalling systems need to be able to communicate effectively with the trains and this has been the most challenging technical issue confronting the line,” Binns suggests.

“There is a Central Operating Section, which comprises all new railway and signalling. It uses Communications Based Train Control (CBTC) and has involved the deployment of moving block signalling. It is, unlike the other sections, essentially a metro product and intended to handle very high levels of capacity.

“At the western end, trains on the spur to Heathrow will use the European Train Control System (ETCS), but conventional signalling with Automatic Warning System/Train Protection Warning System west of the airport. A similar system will operate in the eastern section,” Binns says.

Trains are shortly to start running on the eastern section of the line, while testing at Heathrow and on the underground section will begin later in the year.

“On the central part of the line, we are looking at running trains much closer together and are deploying Siemens’ Trainguard MT to deliver a much denser network,” Binns explains.

While Trainguard MT is new to the UK, it has been used successfully in Copenhagen. The sysem, together with a schedule compiler and timetable processor, are linked to the network’s Airlink central system router, which is hard wired to a lineside Ethernet radio bus.

According to Binns: “Various access points along the line will be able to exchange data with train-borne equipment, using a standard 2.2GHz Wi-Fi signal. Train operation is automatic; the automatic train operator (ATO) will drive the train, while the automatic train protection system will monitor and assess the trains movements.”

Movement authority and position reporting will take place every 0.4s.

“The ATO will also be able to recalculate and drive the trains as energy-efficiently as possible,” he says.

New trains
The Aventra trains for the Elizabeth Line are being provided by Bombardier’s UK train building facility in Derby. Bombardier invested £20m in its plant to expand capacity for production as well as in a 10,000m2 testing and commissioning facility equipped with four 250m-long tracks with full-length pits for underfloor access.

“When we developed the initial concept, we drew on the knowledge of our wider Bombardier network,” explains Martin Wilson, Aventra engineering manager. “We have years of experience from the production, operation and maintenance of our preceding Electrostar fleet of trains, as well as from other Bombardier rolling stock designs.”

“Crossrail was very clear on its aspirations regarding these trains” says the Elizabeth Line project director Joe Bednall. “It wanted the best possible passenger experience that could be achieved with modern rolling stock and set some challenging targets – from minimising internal and external noise to enabling customers to board the trains more easily and quickly.”

The carriages look impressive, providing wide gangways and have been designed to be open and airy. At 23m long, they are longer than the normal 20m long carriages used in the UK and have three sets of wide doors, as opposed to the normal two, making getting on and off quicker and easier. The carriages also have an interconnecting walk-through design.

At more than 200m long, Aventra features nine carriages and can carry more than 1500 passengers.

“Conceived as a modular platform, it has a fixed core design which will remain constant, regardless of how the train is configured,” Wilson explains.

The Elizabeth Line combines a traditional overland service with an underground network. “That is certainly a rarity,” Bednall suggests.

“The key issue was obviously signalling and we needed to ensure that operated safely and seamlessly. We had to manage that process second by second and mapped every part of the signalling system. We identified the functional requirements of the system, then distributed them among the various on-board systems.”

The handover over between signalling systems occurs at Stratford in the east and Paddington in the west.

“It is an automated system, but drivers will be prompted to confirm the decision to move from the traditional legacy system to full ATO. They can regain full control at any point and, as such, retain responsibility for the operation of the train,” explains Bednall.

“On the Underground section of the line, we will be monitoring the speed of trains constantly and calculating safe operating distances. We are able to provide much shorter ‘headway’ between trains as we monitor services dynamically,” Wilson says.

“The different standards associated with ETCS or CBTC, for example, will determine what the driver sees and will transition seamlessly as the train moves from one system to another,” Wilson explains.

A new facility, called ‘auto reverse’, has also been developed, enabling trains to be turned in reversing sidings. By the time the train gets back to the preceding station, the driver should be in the cab ready to form the next service.

Each carriage uses an array of sensors to monitor the train’s health and those sensors interface with the railway’s SCADA systems – a first for Bombardier.

“As well as a comprehensive network of sensors, we’ve also fitted an array of cameras and, to aid the rail operators, trains will also be able to monitor the infrastructure -- including the quality of the track – and inform the operators of any required maintenance. When you’re operating an underground system, access to the track can be problematic so, by proving more predictive maintenance, we will enable the operators to build in significant cost benefits,” Wilson suggests.

Rather than focusing on the entire network, operators will be able to use acquired data to focus on those parts of the line – the track and overhead power delivery systems – which tend to degrade faster.

Intelligent systems
As for the carriages, Bombardier has reviewed the location of every item of electrical and mechanical equipment in order to reduce power consumption and has focused on making the carriages as light as possible. The need for improved energy efficiency has meant the use of intelligent on-train energy management systems.

“The lighting, heating, ventilation and air conditioning systems have been designed to be very energy efficient when compared to existing rolling stock. The train can monitor and manage the temperature and environment and can self-adjust, using a load shedding feature, to enable operation on reduced power if required,” Wilson explains.

The carriages also have intelligent stabling, that helps to reduce power consumption when they are not in service, and a load management system which adjusts the HVAC system automatically, depending on passenger volumes and the ambient temperature.

“The train’s GPS enables it to manage lighting levels as it enters and leaves the underground section of the network.”

In terms of weight reduction, every system has been assessed to reduce weight. “We looked at the wiring and cabling configuration in the underframe of the carriages and optimised the layout of equipment which has now been redistributed through the train. We have also introduced more systems that are controlled through an IP backbone, so reducing the amount of wiring required. The result? A train that is significantly lighter and one that is much more energy efficient,” Wilson suggests.

“The Elizabeth Line can certainly be described as a ‘smart railway’,” Binns adds, pictured left.

From the tunnelling to the building of 10 new stations and the development of the Aventra, Crossrail is one of the most impressive engineering projects currently being undertaken anywhere in the world and when it is completed, is set to transform rail travel in London and the South East.